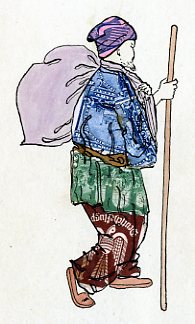 While organizing a small group of files created by the Maryknoll Sisters in 1955, I stumbled upon some rather rare postcards. Some had messages, some were blank, but they all had unusual artwork on the face. The cute and colorful pen and ink drawings with dabs of water color accents drew me in for a closer look. At that point I realized pieces of the colorful design were actually constructed with cut up canceled postage stamps. They were so clever I decided to investigate further. I discovered that the Maryknoll Sisters receive many foreign stamps from their missioners overseas. Around 1949 the Sisters began creating a variety of greeting cards and post cards to sell. In fact, the money raised was used to build new housing for aspiring candidates for their missionary order. The stamps come from parochial schools, parishes and other groups. The Sisters draw a design on the blank cards, have them printed professionally and then they cut and paste the postage stamps to conform to the outlines on the card. The background is then artistically filled in with water color accents. Reflecting the geographic areas where Maryknoll Sisters work, many of the card designs depict figures of Chinese, Japanese and South and Central American boys and girls. The Maryknoll Archives has now accumulated approximately a dozen of these precious gems.