A couple of weeks ago the Archives staff attended a conference in Boston on the future of Catholic religious archives. While there, presenters and attendees alike kept repeating the same idea – the need to tell stories, and using archives as the means to tell those stories.

That’s the beauty of archives – boxes and boxes of materials just waiting to be explored by someone willing to share what they find. Stories of working in the first integrated hospital in America, starting schools for disabled children, providing food and medical supplies after a natural disaster. In most cases these stories are told on paper – through diary entries and reports, letters and plans. However, in the Maryknoll Mission Archives we don’t just collect paper, but hundreds of three-dimensional objects. These artifacts belonged to the members of the Maryknoll Fathers and Brothers, Maryknoll Sisters, and the Maryknoll Lay Missioners. And these objects help tell another chapter of their story.

Take for example the camera that belonged to Fr. Anthony Cotta. Known as Father Foto, he took thousands of photographs both in China and the United States (many of which can be viewed on the website of the University of South California’s International Mission Photography Archive). Photography was a very important part of Fr. Cotta’s mission, and being able to see and touch his camera is a way to greater understand him and the work he completed. 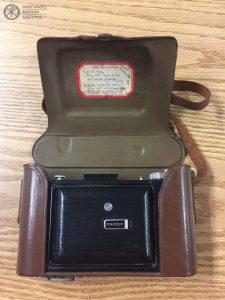 An example of an everyday object that you might not think would make its way into an archive is a deck of playing cards. However, these playing cards belonged to Sister Philomena Marie Rosario who was missioned in the Philippines in the 1940s. When World War II broke out, she, along with other Maryknoll Sisters, was interned in the Los Baños internment camp from 1942 to 1945. These playing cards belonged to Sister while she was in the camp and she was able to bring them with her when she was released on February 23, 1945. 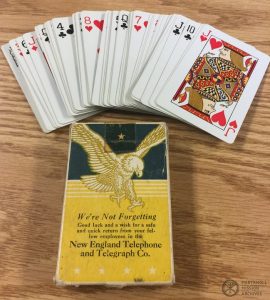 Artifacts are another way to tell our stories.  Just look around your own life and see what objects are important to you – those items that hold treasured memories.  They are all a part of what makes you who you are.  And just like those objects you hold dear, members of the Maryknoll community also had items that were important to them.  Luckily, many of those artifacts have made their way to the Maryknoll Mission Archives and I am happy that I am able to share some of them with you.