Once a year, Jubilee is celebrated at Maryknoll. It is the time chosen to celebrate the mission life of Maryknollers that have reached landmark anniversaries. Though the celebration cannot be carried out in its usual way due to the current health crisis, we still wish to honor this remarkable achievement of the 6 Fathers and 1 Brother from the Class of 1960. This year marks 60 years since their ordinations and first oath. 60 years of mission across the world. Join us in celebrating the mission careers of these extraordinary Maryknollers with a brief look into their journeys! 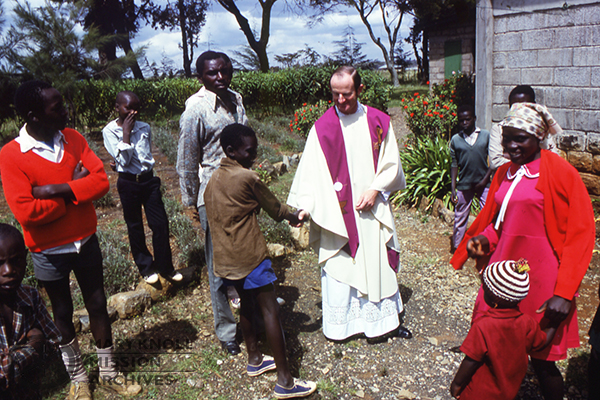 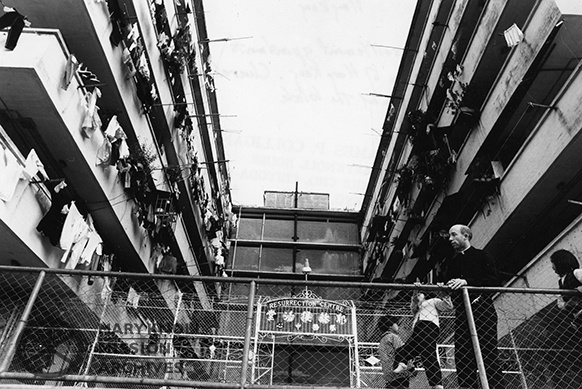 Reverend Michael G. Callanan was born on December 12, 1932 in San Francisco, California. He joined Maryknoll on September 11, 1946 and received his bachelor’s degree in philosophy from Glen Ellyn 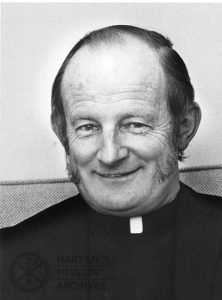 in 1955. He then went on to earn his master’s degree in theology from Maryknoll School of Theology (MST) and was ordained to the priesthood on June 11, 1960. Later in 1960, Fr. Callanan received his mission assignment to Tanzania and began language school in Shinyanga with several other Maryknollers upon arrival. He then helped continue Maryknoll’s mission work with Fr. Lou Bayless in Nassa, Tanzania. During his time in Tanzania, he also worked as pastor in Malili parish and Chamugasa.  In 1975, Fr. Callanan was assigned to Kenya and from 1988 to 1991 he served as the assistant to the regional superior (ARS). In 1979, he arrived at Jericho parish, where he would become pastor the following year.  Fr. Callanan was still working as the pastor of Jericho parish in Kenya, when he was asked to return to the US to do promotion work in 1991.  Fr. Callanan retired in 1998 and became a member of the Senior Missioner Community in 2014.

Reverend Vincent F. Corbelli was born on January 30, 1934 in Rochester, New York. He joined Maryknoll on June 24, 1951 and received a bachelor’s degree in philosophy from Glen Ellyn in 1955. In 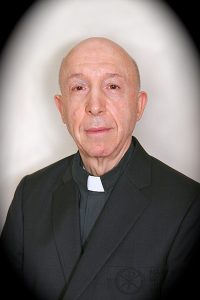 1959, he earned another bachelor’s degree in sacred theology from the Maryknoll School of Theology (MST). In 1960, he went on to earn a master’s degree in religious education from MST and was ordained to the priesthood on June 11, 1960. After ordination, he was assigned to the US Development Department, where he worked until his assignment to Kwun Tong, Hong Kong in 1964. There he served as pastor of a yet unnamed parish. Fr. Corbelli held the position of Regional Superior in Hong Kong from 1978 to 1982. In 1993, he set up the St. Jerome Mass Centre in Tin Shui Wai, Hong Kong. Fr. Corbelli also served as assistant parish priest in St. Jude’s Parish, North Point, Hong Kong until 2019. As a senior missioner, he continues his time in Hong Kong. 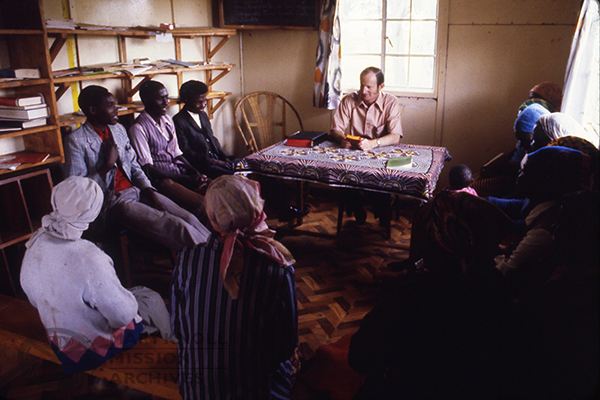 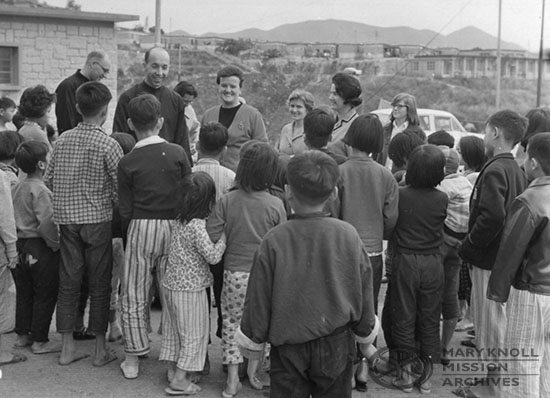 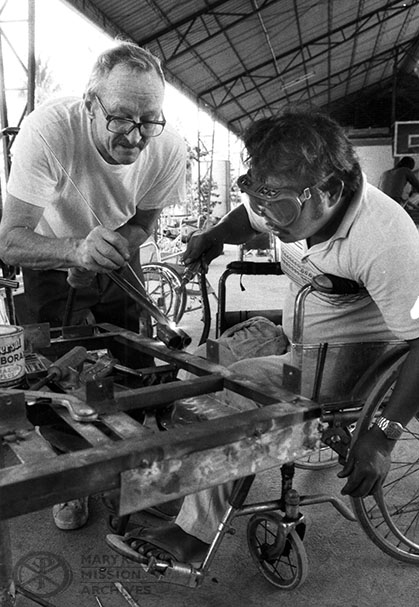 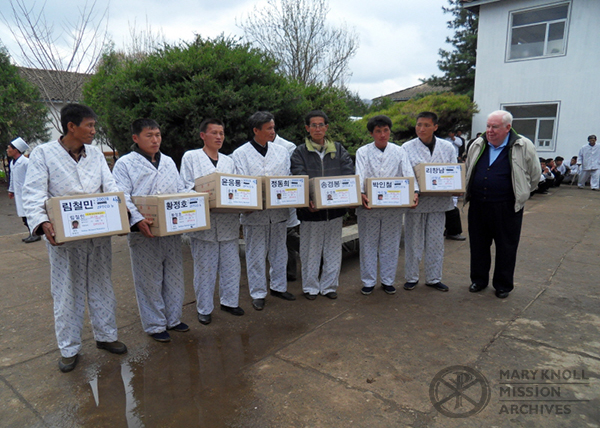 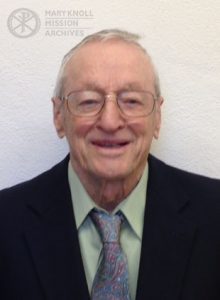 assigned to the Philippines where he did general maintenance for the region and also took interest in the cooperative movement. As his time in the Philippines continued, Bro. Dowling worked for many years helping the elderly, with finding proper housing, food and social justice, and was involved in caring for mentally challenged people. From 1983 to 1987, he returned to the US to work in the Development Department. In 1987, he was then assigned to Western Samoa where he worked in home visitations and catechetics. Bro. Dowling then continued his mission work in the Philippines until his retirement in 1996. In retirement, he continued to volunteer his time in the Philippines, as well as later in Los Altos, CA at St. Athanasius Catholic Church in Mountain View, where he and other Maryknollers distributed fresh and canned fruits and vegetables, eggs and potatoes to families. In 2014, Bro. Dowling joined the Senior Missioner Community.

Reverend Gerard E. Hammond was born on August 15, 1933 in Philadelphia, Pennsylvania. He joined Maryknoll on August 6, 1947 and received a bachelor’s degree in philosophy in 1955 from Glen 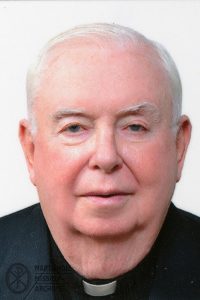 Ellyn. In 1960, he earned a master’s degree in religious education from the Maryknoll School of Theology and was ordained to the priesthood on June 11, 1960. After ordination, Fr. Hammond received his mission assignment and began serving in South Korea. During his long mission career in South Korea, he has ministered to refugees and orphans from the Korean War at the Maryknoll-run Korea Sacred Heart Orphanage, served as a teacher, the pastor of two parishes and vicar general of the Cheongju Diocese. Fr. Hammond has also held the positions of Regional Superior (1989-1995, 1998-2004), Local Superior (2004-2016), and Assistant to the Regional Superior (2013-2019) while missioned in South Korea.  He had long wanted to minister in North Korea and when an opportunity, facilitated by the Eugene Bell Foundation, a U.S.-based Christian organization that sponsors programs, projects and exchanges of humanitarian nature in North Korea that focus on medicine along with the diagnosis and treatment of multidrug-resistant tuberculosis, presented itself he did not hesitate. He made his first trip to North Korea with this program in 1995 and has since made over 50 trips through the demilitarized zone. In 2014, Fr. Hammond received the Gaudium et Spes Award, the highest honor bestowed by the Knights of Columbus, for his service to the sick in North Korea and for his selfless bravery in carrying out his ministry. His mission work continues in Seoul, Korea. 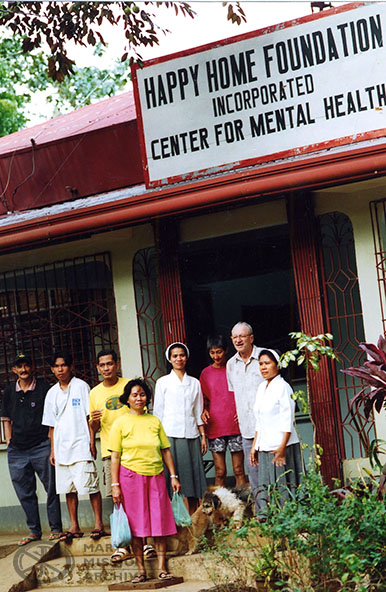 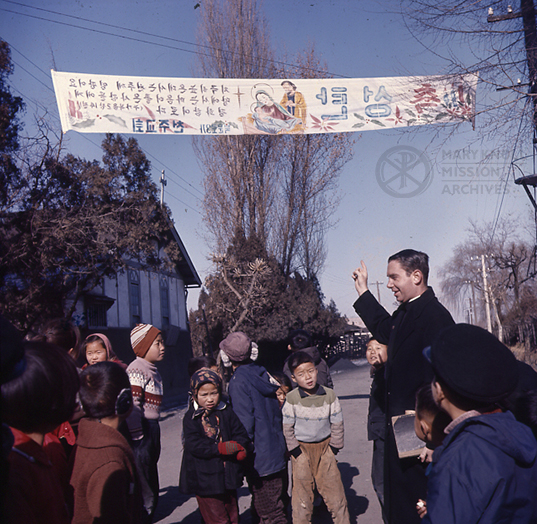 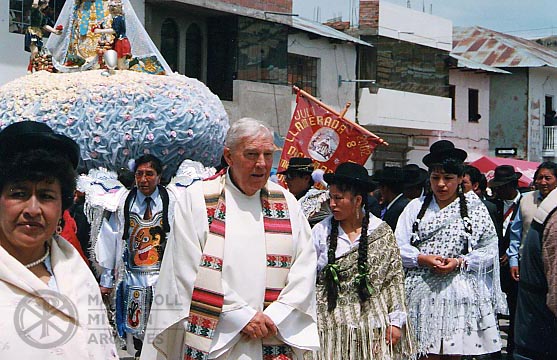 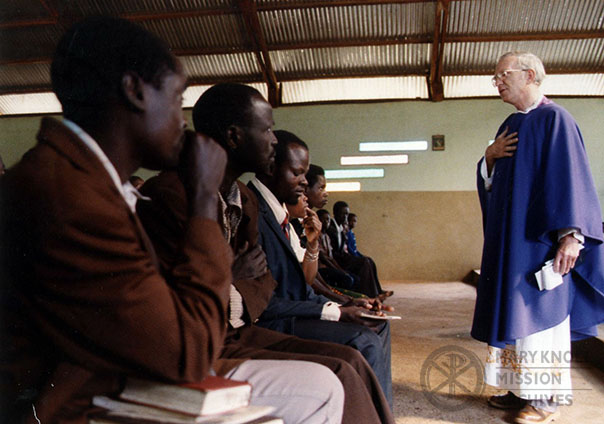 Reverend Robert E. Hoffmann was born on October 24, 1933 in Milwaukee, Wisconsin. In 1960, he earned a bachelor’s degree in philosophy from St. Francis Seminary in Wisconsin and was ordained 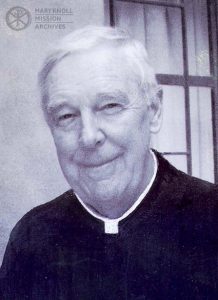 to the priesthood on May 28, 1960 for the Archdiocese of Milwaukee. Remembering the Maryknoll missioners who visited his school as a child, he began to feel a calling to a missionary vocation. With permission to achieve this vocation, he was accepted and joined the Maryknoll Society on August 28, 1963. The following year, Fr. Hoffmann took his First Oath to the Society on July 2, 1964 and was sent to the mountains of Peru where he has been serving the people for over 50 years. When he first arrived in the altiplano, he held positions such as pastoral coordinator, supervisor of seminarians for the Peru region and vicar general of the Juli Prelature. From 2008 to 2010, he served as Assistant to the Regional Superior in Latin America. In the later portion of his mission work in Peru, he has served as pastor of five Puno communities, splitting his time between visiting four of these communities and administrating a chapel in Jayllihuaya that is run by Fr. Ed Cookson, MM. Father Hoffmann is also a spiritual director to different organizations and part of the executive board of the office for Human Rights and the Environment, a local non-profit organization led by Sr. Patricia Ryan, MM. His mission work continues in Peru.

Reverend Carl P. Meulemans was born on March 17, 1934 in Wrightstown, Wisconsin. He joined Maryknoll on September 5, 1952 and received a bachelor’s degree in philosophy from Glen Ellyn in 1955. 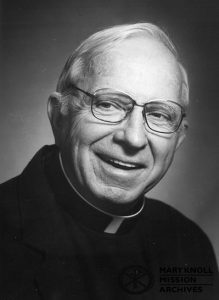 He also earned a bachelor’s degree in sacred theology (1959) and a master’s degree in theology (1960) from the Maryknoll School of Theology (MST) and was ordained to the priesthood on June 11, 1960. After ordination, Fr. Meulemans continued with his education and, in 1968, he graduated from Washington University in St. Louis, MO with a master’s degree in education. He was assigned to Tanzania in 1971 and, in 1976, he became the Africa Regional Coordinator.  In 1978, he took over Fr. Philip Sheerin’s position as one of the directors of the language school in Makoko and remained there for the next four years. He returned to the US in 1983 and, aside from a brief mission assignment to Venezuela from 1985 to 1986, continued working there until 1987 when he returned to work in Kowak, Tanzania. He would return to mission work in the US in 1991, working in the mission promotion department for a time, and continued to do so until his retirement in 2008. In 2014, Fr. Meulemans joined the Senior Missioner Community. During his time in this community, he has been involved in parish and prison ministry in the Green Bay area and has lead retreats for Maryknollers. 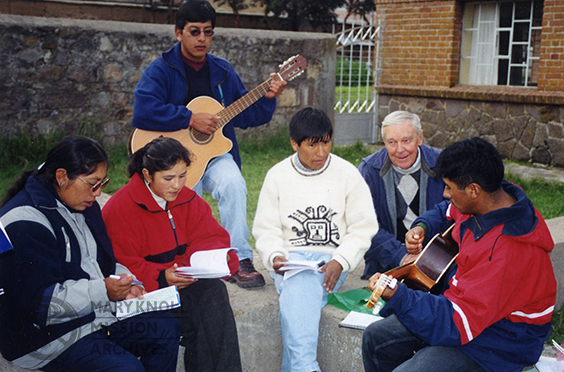 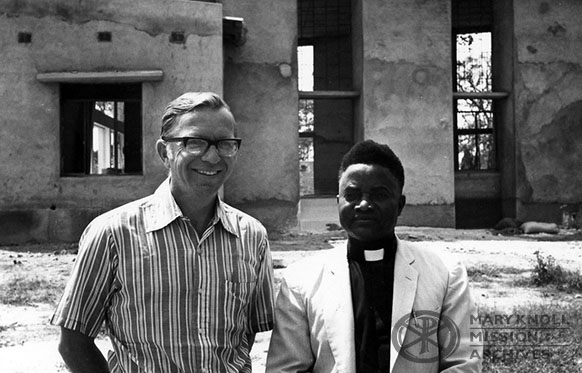 Reverend John J. Sullivan was born on August 27, 1933 in Woodside, New York. He joined Maryknoll on September 7, 1949 and received a bachelor’s degree in philosophy from Glen Ellyn in 1955. In 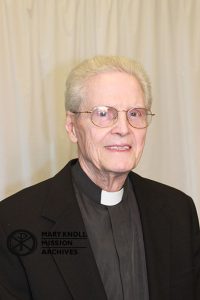 1960, he earned a master’s degree in theology from Maryknoll School of Theology and was ordained to the priesthood on June 11, 1960. After ordination, he was assigned to mission in Hong Kong, where he served as Regional Superior from 1968 to 1973. Fr. Sullivan returned to the US in 1973 to work in the Formation and Education Department (1973-1975, 1980-1983). During this time of mission in the US, he also held the position of Department Director for the beginnings of the Lay Missioners Office (1975-1979). He and Sr. Mary Anne O’Donnell were two of the founding members of the Maryknoll lay mission program.  In 1980, Fr. Sullivan earned a master’s degree in pastoral counselling from Loyola College in Maryland, which he utilized while working with Sr. Maria Rieckelman. Together, throughout his mission career, they held workshops, seminars and retreats for communities and leadership groups, helping them face issues of interpersonal growth, leadership, trauma, stress and reconciliation.  He returned to mission in Hong Kong in 1983 and remained there until 2001. Fr. Sullivan’s next assignment took him back to the United States to fill the position of Department Director for the Affiliates (2002-2006). He continued his mission work in the US and retired in 2009. Once retired, Fr. Sullivan spent time volunteering with the Maryknoll Office of Global Concerns on Israel-Palestine issues. Fr. Sullivan served briefly as the Local Group Superior and joined the Senior Missioner Community in 2014. 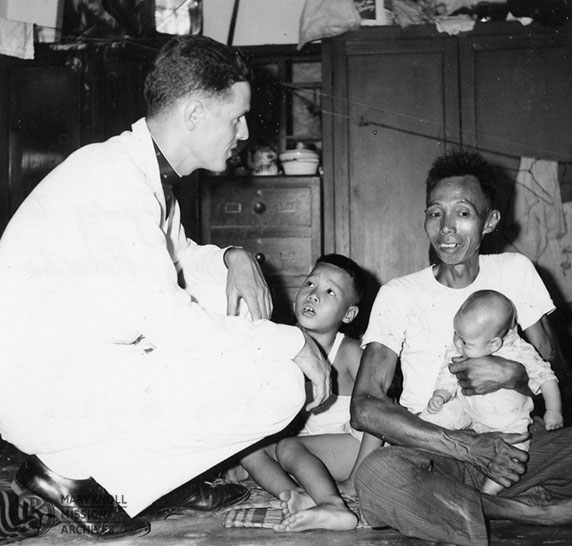 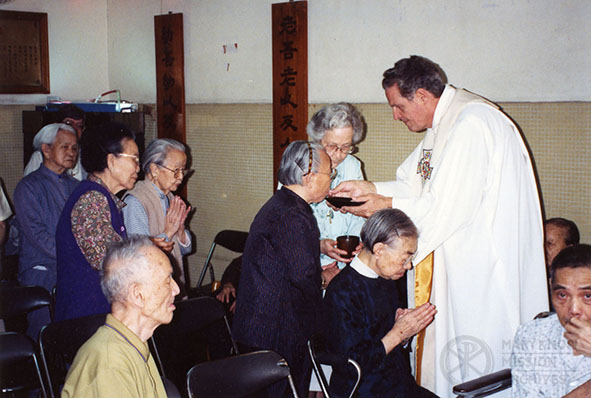