A Visit with Shirley Temple

I love finding surprises amongst the archival materials – those items that you would never imagine stumbling upon in the normal course of your work. One such occasion happened to me recently. I was looking for photos of a particular Sister in the Sisters’ photograph collections and was in the box containing images of mission work from the St. Francis Xavier School in Los Angeles, California when a folder title caught my eye – “St. Francis Xavier School – Visitors – Shirley Temple, 1936.” I had to pause and I thought to myself “there can’t really be a photo of Shirley Temple in here, right?”

Well I was mistaken! Inside were a few photos of the famous child actress with students from the St. Francis Xavier School. The photos had a label on the back indicating that the students were visiting Shirley Temple on her seventh birthday in April 1936.

I needed to know more, so I immediately  went to the both the Sisters’ and Fathers’ diaries from Los Angeles, and found the following entries:

Sisters:
April 30, 1936: “Feast of St. Catherine of Siena, a day dear to most of us and we celebrated with recreation all day. At school, a group of seven year old children from the second grade were dressed in their native kimonos and taken by Frs. Lavery and Caffrey to a birthday party given by Shirely Temple…They were the only guests and enjoyed a delightful afternoon with the child star…A 7 course dinner was served for which the children were prepared having been rehearsed at school as to the use of the silver and linen. Pictures were taken of the children at table and at play. We heard later that our own Paula made the most impression and that Shirley talked about her for several days later.”

Fathers:
April 30, 1936: “One of the most interesting days for the school children occurred today. A group of them were invited to a private party at Shirley Temple’s home in honor of her seventh birthday. Father Lavery and Father Caffrey together with eight of the children went along and had the most enjoyable time with Shirley and her mother and her director, Doc Bishop. Many pictures were taken…but the biggest surprise of all was when Shirley gave to each individual youngster an autographed picture of herself with each individual name written in by her own hand.”

It was fun uncovering this little bit of Maryknoll history that I don’t think many people around today even knew occurred. One of the great things about archives is that there are so many hidden gems just waiting to be discovered. I wonder what this year will bring! 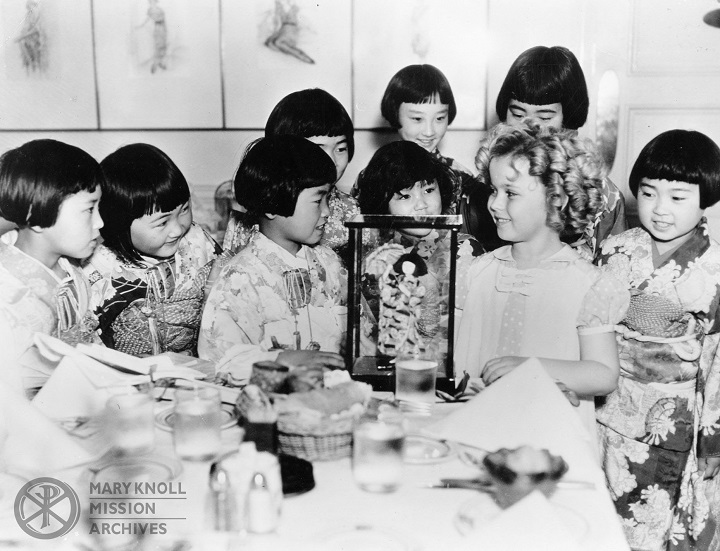