Good news travels fast. This particular piece of good news began with a phone call received at Maryknoll by Sister Mary Francis Davis on February 12, 1920 from Monsignor Dunne, Chancellor of the Diocese of New York. His glad tidings were for Father James A. Walsh, Co-Founder of the Catholic Foreign Mission Society of America and champion of the Teresians efforts to be recognized by Rome as an official congregation of women religious. Archbishop Hayes of New York received a letter from the Sacred Congregation of Religious in Rome on February 12 granting him permission to establish the Teresians as a diocesan religious institute. On February 14 he exercised this authority by writing the letter that established the Foreign Mission Sisters of St. Dominic. It had taken eight years and three petitions to Rome, but the Teresians’ hopes were finally realized.

Monsignor Dunne directed Sister Mary Francis to tell Father Walsh first, but her excitement was too much to contain. “How could I go rushing over to the Seminary without saying a word to anyone? So I told Sister Fidelia and then Mary Teresa, and then we did get word to the Seminary. We got everyone together here and told them. They put me on top of the table and had me announce the whole thing.” Sister Mary Francis even danced on that table top. “I was carried away. Isn’t it wonderful!” 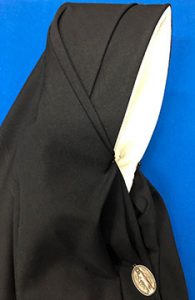 There was one Teresian missing from the announcement celebration, though. The Maryknoll Sisters Foundress Mother Mary Joseph Rogers was away at Trinity College in Washington D.C. giving a mission talk when the news arrived at Maryknoll. She returned home on February 14 to an elated group of women who could hardly wait to recount what happened. Sister Mary Francis had the privilege of doing so.

Three days later, on February 17, Monsignor Dunne arrived at Maryknoll with the precious document in hand. He handed it to Father Walsh who in turn passed it to Mother Mary Joseph. The women of the Foreign Sisters of St. Dominic, known as the Maryknoll Sisters, traded their uniforms for grey habits, scapulars, white veils and silver medals of the Blessed Virgin Mary.

Each subsequent year on Foundation Day, Mother Mary Joseph offered a reflection to all Maryknoll Sisters on the Congregation’s foundation, identity and work. As I read through some of these reflections, a portion of her 1940 talk stood out. In it she shared that the rejection of their second petition in 1918 was due in part to the opinion of the head of the Sacred Congregation of Religious’ feelings about the suitability of American women for mission: “American girls had not the courage or the strength, that they were too soft and accustomed to luxury, to endure the hardships of mission life, and that any such endeavor as we had in mind was doomed to failure because we were Americans.” Mother Mary Joseph would not let this claim go unchallenged. 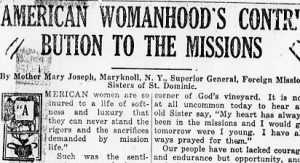 Seven years after the Maryknoll Sisters Canonical Foundation, Mother Mary Joseph refuted this assertion in the November 23, 1927 edition of Our Sunday Visitor. She wrote “American Womanhood’s Contribution to the Missions” for the first Mission Sunday held in October 1927. In it she described not only the work of the Maryknoll Sisters but also a number of other American Catholic women religious congregations as evidence of the positive impact women religious were having on the world in the areas of education, health care and economic development especially for under-served women and children. “It is good to realize that in this year of our Lord, 1927, on Mission Sunday, American Catholics can look with justifiable pride upon their own daughters who have already gone…into the mission field and who claim a special share of the prayerful affection and material aid of those in the homeland.”

A century later the Maryknoll Sisters are still “giving witness to God’s love and devoting our lives in service overseas to help those in need.”

Congratulations to all Maryknoll Sisters on your Canonical Foundation Centennial!