The Hills Are Alive With the Sound of Music 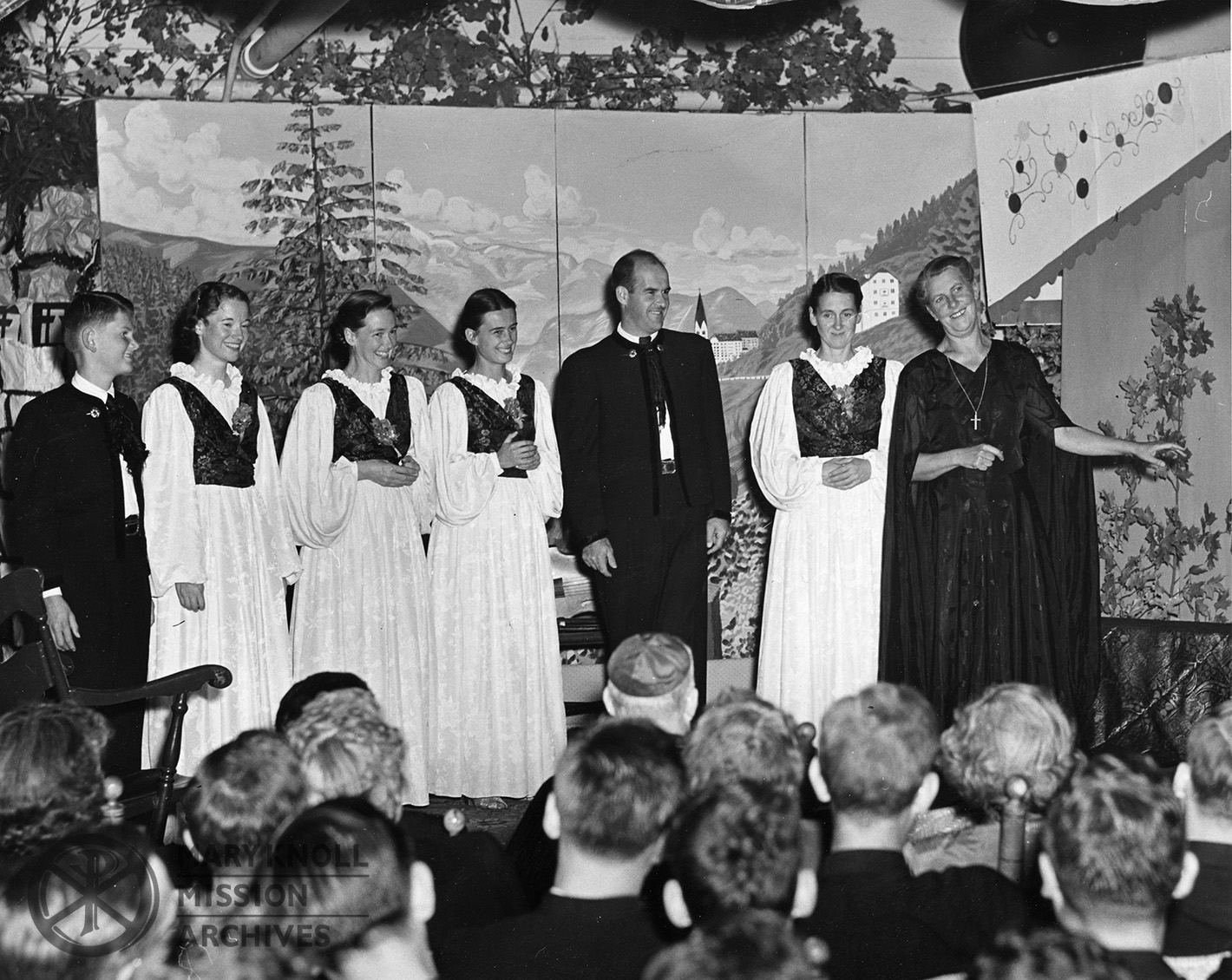 I always like to highlight items in the Archives that you might not think you would find.  One such thing was a photograph of the Von Trapp family (of The Sound of Music fame) giving a performance at Maryknoll in 1951.  Once I saw the photo I said a little prayer hoping I would find a diary entry that would provide more information as to what the Von Trapp family was doing at Maryknoll.  And luckily my prayer was answered!

In the October 1951 Maryknoll Center Diary I found a very detailed entry of the visit:

“The old castle of Buchenstein seen from the Dolomiten Strasse in the Austrian Tyrol clings like a swallow’s nest to the green sides of a deep valley.  Pretty pines cover the mountain which rises on one side of the road and falls away on the other down towards a mountain torrent far below.  In the distance is a radiant blue lake.  The background is filled with range after range of purple Dolomites which disappear finally in dazzling snowcaps touching the sky.  The panorama around Buchenstein was transported to the seminarians’ recreation room on the night of October 13 [1951].  Student artists effected the miracle with paint, brushes and canvass.  In the foreground they erected a Tyrolean mountain hut with its broad overhanging eaves, and they set up a rustic crucifix.  The occasion was a departure ceremony for the Trapp Family Singers who came to Maryknoll hoping to make final preparations for their tour of the Far East.

The ceremony consisted chiefly of songs by the family with musical accompaniment on their ancient instruments – the virginal, the viola, a gamba and the old block flute.  It was something new in entertainments.  Father [Frederick] Dietz’ heart melted when they sang Engelbert Humperdinck’s cradle song from Hansel und Gretel, the very same that his mother used to sing for him when he was very little…Twelve-year-old Johannes Trapp brought the house down with his tongue-and-finger-twisting demonstration on the soprano flute.  Their various numbers, all beautiful, are too numerous to list.

They were in the midst of a gentle lullaby sung by Mother Trapp, with the rest of the family humming in soft accompaniment, foot lights dimmed and everything reduced to shadows except Mother Trapp and the old Schloss Buchenstein in the distance, when the spell was dangerously near broken by the abrupt entrance of Baby Mike.  Mike is a big boxer puppy with more bounce to the ounce than a rubber ball.  He belongs to a family of a neighboring estate.  Whenever possible, he gives the family the slip and gallops over to Maryknoll, and after such escapes a chauffeur in livery drives up in a big Cadillac to bring Mike home again.  They were at the softest measure of this beautiful berceuse when the big puppy, fresh and full of pep after a nice nap, put his shoulder against the door, bounded in and went slobbering around the audience all set for a grand romp.  Poor Mike got the bum’s rush and went out so fast he still has a bewildered look.

“The Echo Song” was a big hit and had to be repeated at Cotta Stadium Sunday morning after the High Mass, when the little Trap girl with the echo hid in the woods to sing her part.”

After the visit with Maryknoll, Maria wrote a letter which appeared in part in the May 1952 issue of The Field Afar:

“Baroness Maria Augusta Trapp, of the internationally famous Trapp Family Singers, on a recent visit to Maryknoll, remarked that a new grandson arrived in her family.  ‘Michael Martin Maria Trapp is his name,’ she said.  ‘He has three M’s already.  Nothing would make me happier than to see him come to Maryknoll some day and add two more M’s after his name.’

The visit of the Trapp family was an inspiration to all Maryknollers living at the Center.  One and all were caught by the outstanding devotion to Catholic principles, evidenced by this superbly Catholic family.”

There were earlier mentions of the Superior General visiting the Von Trapp Music Camp in Stowe, Vermont.  Though it is unclear how the relationship began or if it continued.  However long it lasted, I hope you enjoyed this little look into the moment when the Trapp Family Singers came to Maryknoll and gave an unforgettable performance. 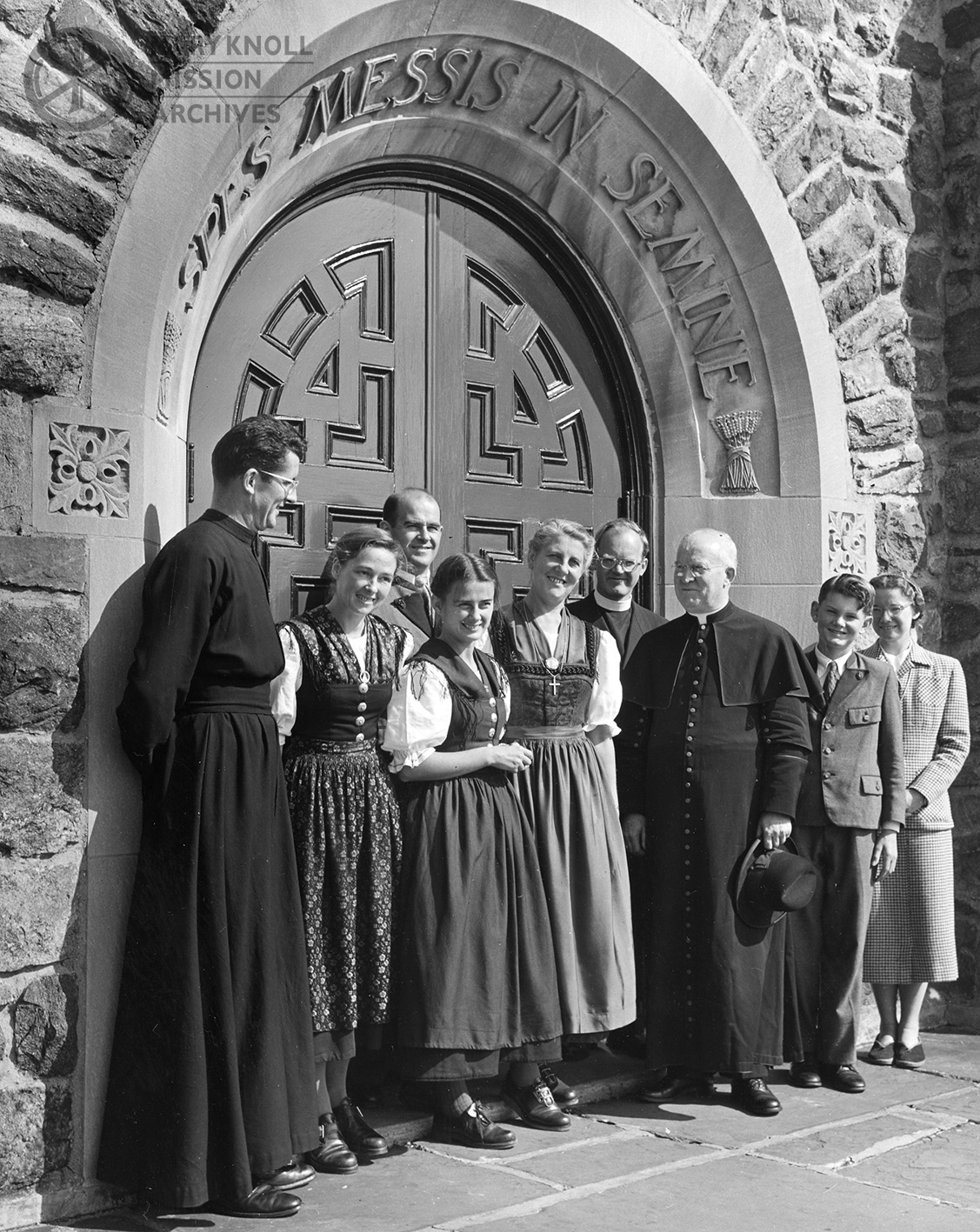