As someone intrigued by the thought of traveling through time, the idea of exploring what was happening on this particular day in the past is always fascinating. To satisfy that curiosity, I have investigated this idea in previous blog posts. However, this time I thought, what if I pieced together an entire week? 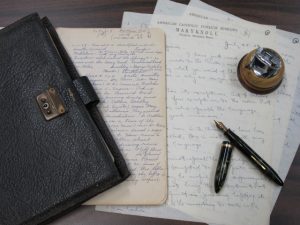 ​To do so, I decided to gather a small snapshot of each day from a different part of the world and a different moment in time. Different times, different places, same week!

Now there are so many experiences occurring simultaneously that to capture them all or experience them all would take several lifetimes. Therefore, before approaching the Maryknoll Sisters Mission Diaries and the Maryknoll Fathers & Brothers Mission Diaries, I selected a specific week, November 20th – November 26th. Selecting these particular dates made the incredibly large amount of materials to go through much more manageable. As our week of November 20th begins and we create so many individual experiences of our own, take a walk with me through the reflections of the Sisters and Fathers & Brothers from the past. For in the not so distant future this is exactly what our current experiences will become. A tapestry of snapshots in time that help to make each of us who we are.

“Nov. 20 – This was the great clean up day, when the accumulated spring house – cleanings of the past ten years that should have been were inflicted on our new domicile at one fell swoop. How it took us back to the old days of pioneering at Maryknoll, the good old times when we spent our holidays in tinting St. Michael’s with the famous silver gray, or tearing down the old plaster walls in St. Teresa’s Lodge. That was the good old practical stuff for the missionary, – had we only known it, instead of begrudging the time it took from wrestling with the Code of Hammurabi and Professor James. Anyhow, apart from that, we got the house in ship-shape, as far as it could be done without building a new one, and to-night we are settled down like old householders.”

As mentioned above, here is a entry showing that manual labor was done on a holiday:
“Nov. 27 – Thanksgiving Day. Free. Manual labor on the trenches and interior renovation.”

“Nov. 21 – The statue of Our Lady of Fatima arrived in the PI today.

It was sent by Mr. Duff, whom so many of our Sisters around the world have met. It was met at the airport by a good showing of people and carried in an open car decked with flowers. People who went like to repeat what they call little miracles that occurred on its arrival. First as it was elevated to the car a flock of birds 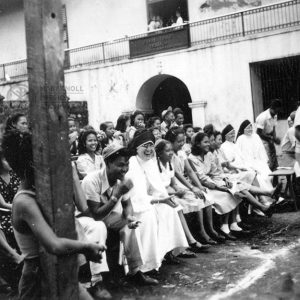 suddenly appeared from nowhere and circled over the head of the statue and then disappeared. It was an overcast day and the airfield had no trees about it from which they could have come. Later while the car was moving to San Seda College where the statue was to be placed it started to drizzle. When they arrived at the college everyone was amazed to find the flowers were not wet at all.

Since its installation at the Benedictine college multitudes throng there every day. They bring tributes of flowers and money and lay them at her feet. The devotion is certainly taking hold on the people.”

“NOV. 22 – Fr. Skelly, of Miraculous Medal fame, called today. On the 27th, will be celebrated the centenary of the apparition of Our Lady to St. Catherine Laboure, and we will prepare for the feast by a triduum – singing the invocation ‘O Mary, conceived without sin, pray for us who have recourse to thee.’

After dinner, Mother and Sr. Regina conducted a tour to the Motherhouse. The cornerstone is in place, but the ceremony will not be held until the Spring. The stone, bears in Latin, the simple inscription THE YEAR OF OUR LORD 1930.

The top is open waiting to receive the metal box, in which will be placed with the customary documents, a piece of stone from the house of St. Anne, where Our Blessed Mother was born – from the Chamber of the Immaculate Conception; a stone from the house of the Annunciation, where the Angel Gabriel brought his message to our Lady, a piece of bark from the Virgin’s Tree in Heliopolis, under which tradition says the Holy Family rested on the flight into Egypt, and a small mosaic from the original floor of the home of St. Cecilia.

In addition to these, it will contain a statue of St. Joseph and a statue or medal of St. Philomena. 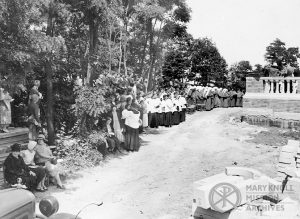 Laying of the Motherhouse cornerstone

May we, and all Maryknollers to follow us be worthy of a home so blessed.

Mother obtained these real treasures on her recent trip. All of the first floor – that above the ground floor – is poured. ​Here are located the entrance hall, reception rooms, mission exhibit room, chapel, etcetera. Above them towers girders to the second floor.

On the East side of the building, this floor is on a level with the tree tops; meaning the first floor. You can imagine the views that will be obtainable from the second and third floors!”

“23. Thanksgiving Day – and we began it with our prayers of gratitude at Mass. The turkey from Mrs. Etcharran had been delivered last night, but our cook wasn’t satisfied with the cleaning job. When we came out from breakfast we discovered that she had washed the bird with brown soap – ‘that’s the way to get out all 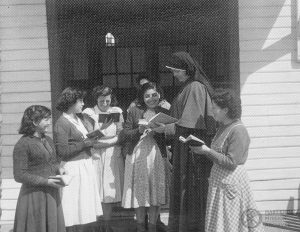 the pin feathers’, she explained; and she had cut the legs through, close to the body. ‘But why did you do that?’, we questioned. ‘Well, they were sticking up in the air’, she replied, ‘and we have to fit the turkey into the oven’. Just when we were ready to put the turkey into the oven, there was a knock at the door. There stood a boy from the local store, holding a live turkey in his arms! This was the one that Father Sampson had been able to get from the farm – so we instructed the boy to take it out in the yard, and we begin to think now how we can take care of it, and keep it alive until Christmas!

A box of goodies had come in from Villa Maria Sisters in Santiago to help us to celebrate, so we had a real Thanksgiving dinner. True there was no cranberry sauce, nor mince-meat nor pumpkin nor squash – but we had the turkey, and like the Crachitts, ‘plenty of potatoes’, and lemon pie made from the package of filling sent down to us by the Villa Maria Sisters – and so we celebrated.

In the afternoon Father Sampson brought over a can of candy for the children, and offered to show them some educational movies which they had brought along. Father said he didn’t know just how we would distribute the candy, but we said, ‘We’ll just give a handful to each youngster as he comes along’. Father laughed and replied, ‘Spoken like a true American – give it out by the handsful. Here they give it out one piece at a time, and the children have to be satisfied – but these Americans know how to do it – by handful’. But we discovered one little first grader who was smarter than we. He must have noticed that the little ones, even when they held two hands together, could only hold four or five pieces of candy, so when his turn came, he held out his coat, and said, ‘Put it in my pocket, Madre.’ And with the movie, the children too had a happy Thanksgiving! 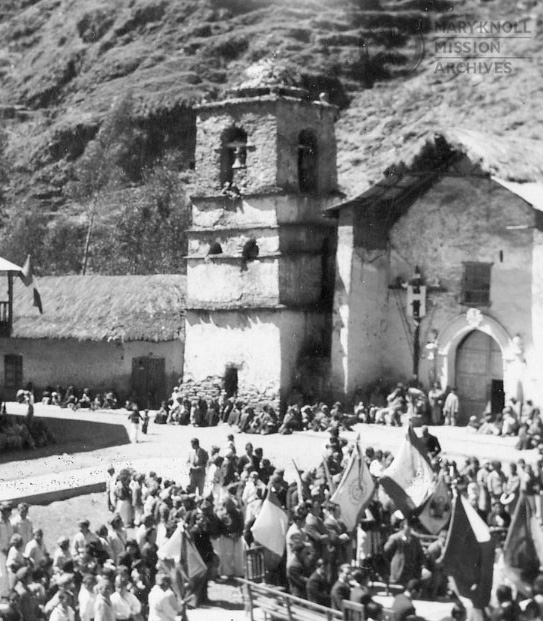 “Sun. Nov. 24.  Mass at 8 and 9. The latter was attended by the town officials, the school children and the ‘mobilized.’ The ‘mobilized’ mobilized all their forces at the consecration of the Mass to deafen the people with a blast of music that almost blew the vestments off Father Cleary’s back. The Mass is usually celebrated out of doors on this day but due to a very bad spell of rainy weather it was held indoors – despite the fact that the sun actually did come and the rain came down in buckets.[..]  Received some helpful hints on growing vegetables in this altitude and climate. Devotions and Benediction very well attended this evening.” 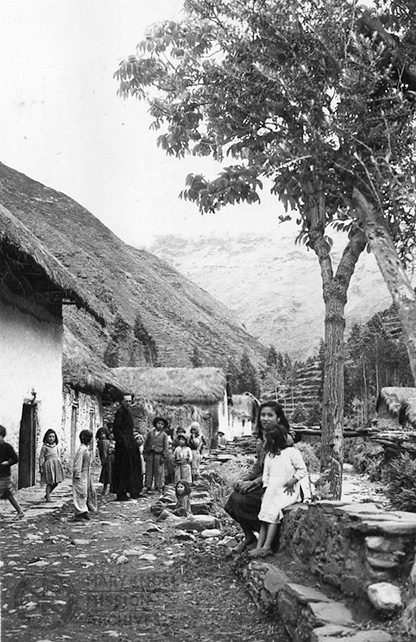 In looking through the materials,  I found a tradition of a group of Maryknoll Seminarians called the Philosophers performing on November 25th. Take a look!

“Thursday, Nov. 25: Thanksgiving Day. The High Mass this morning at Community time, was offered, at the request of the Academia, for Gerry Held. Following an old Maryknoll tradition, the Philosophers celebrate their patronal feast with the presentation of ‘The Mikado’. Much talent is in evidence, and the presentation is thoroughly enjoyed by the whole Community. Father General and Bishop O’Shea were present. During the intermission, Brother Wadlewski raffles off two pipes donated by Father Keller. The proceeds will help to buy Christmas gifts for Japanese children at Manzanar.”

“Saturday, Nov. 25: Feast of St. Catherine of Alexandria, Patroness of Philosophers. In the evening the Philosophers presented a musical show. The orchestra, following its debut at the Gully Party, was again a huge success. The show was modeled on the popular Camel Caravan radio program. Solos were sung by Brothers Cadden, Robert Hughes, and Bernard O’Brien. The Philosophers’ Glee Club gave an excellent rendition of the final number, ‘Ballad for Americans.’”

“November 25: Last Sunday after Pentecost and 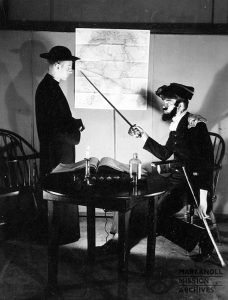 feast of St. Catherine, Patroness of Philosophers. The Philosophers entertained the Council, Faculty, and students with ‘Trial by Jury’ which was done in a most enjoyable and talented way. Refreshments followed the performance.” 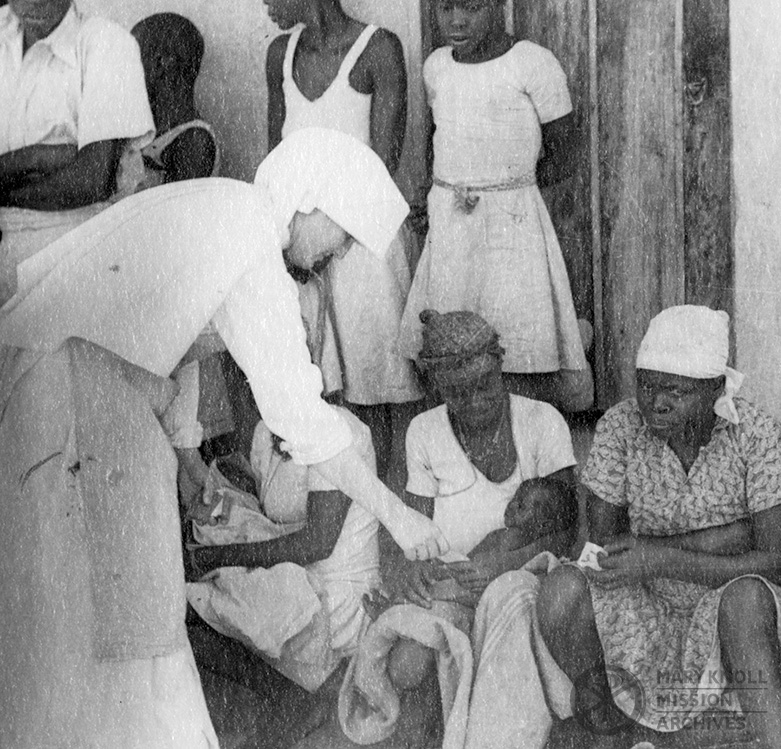 “NOVEMBER 26 A car drove up to our front veranda at eight this morning. Father Pierce jumped out and sent a hurried message to Sister Margaret Rose that Lady Twining, wife of Governor Twining of Tanganyika, had come down to visit the Sisters. She was on her way to Kinesi to board the ferry for Musoma and asked to stop at Kowak to see us. Thus began a very interesting hour and a half visit with the ‘first Lady’ of Tanganyika.[..]

Lady Twining is a medical doctor and is very interested in medical work among the Africans. She was especially interested in having us train native village nurses and spoke of the possibility of getting a Government grant for this type of training program. Lady Twining told Sister Catharine Maureen to have Doctor Mack, the Mennonite doctor at Utimbara mission, present her qualifications at the next medical meeting which will take place in Dar-es-Salaam in January, and she promised to do her best to have us receive this help. The Fathers stayed to tea with Lady Twining and her companions, but soon afterwards Lady Twining announced that they must leave if they were to meet the ferry at Kinesi. We snapped Lady Twining’s picture and had her sign our guest book as remembrances of her visit. Everyone seems hopeful that some help may be gained for medical work in Kowak as a result of this chance visit of Lady Twining.”