Origins of the Maryknoll Office of Global Concerns

The Maryknoll Office for Global Concerns is a collaborative office of all three Maryknoll entities – (Fathers and Brothers, Sisters and Lay Missioners) with the purpose of researching, educating about and advocating for social, justice and peace issues from around the world. This month marks the 25th anniversary of the founding of the office, though founding is not quite the right word. The office is actually a unification of the Society’s Justice and Peace Office and the Congregation’s Office of Social Concerns. In celebration of 25 years of a unified office, we will explore the origins of both offices and how their collaboration evolved.

You can click on each image to enlarge it and see the caption.

The Maryknoll Fathers and Brothers began its Justice and Peace initiative in 1974, following a call from the Society to better educate its members on justice and peace issues around the world. Fr. Charles Davignon was selected to be its first Coordinator and was tasked with setting the office up as an extension of Mission Education. Fr. Davignon would begin the process of setting regional coordinators to help manage regional issues, and would found the office’s long-running newsletter, News Notes. After his time as coordinator, the Maryknoll Justice and Peace Office was an institution that educated and advocated on a wide range of human rights and justice issues. 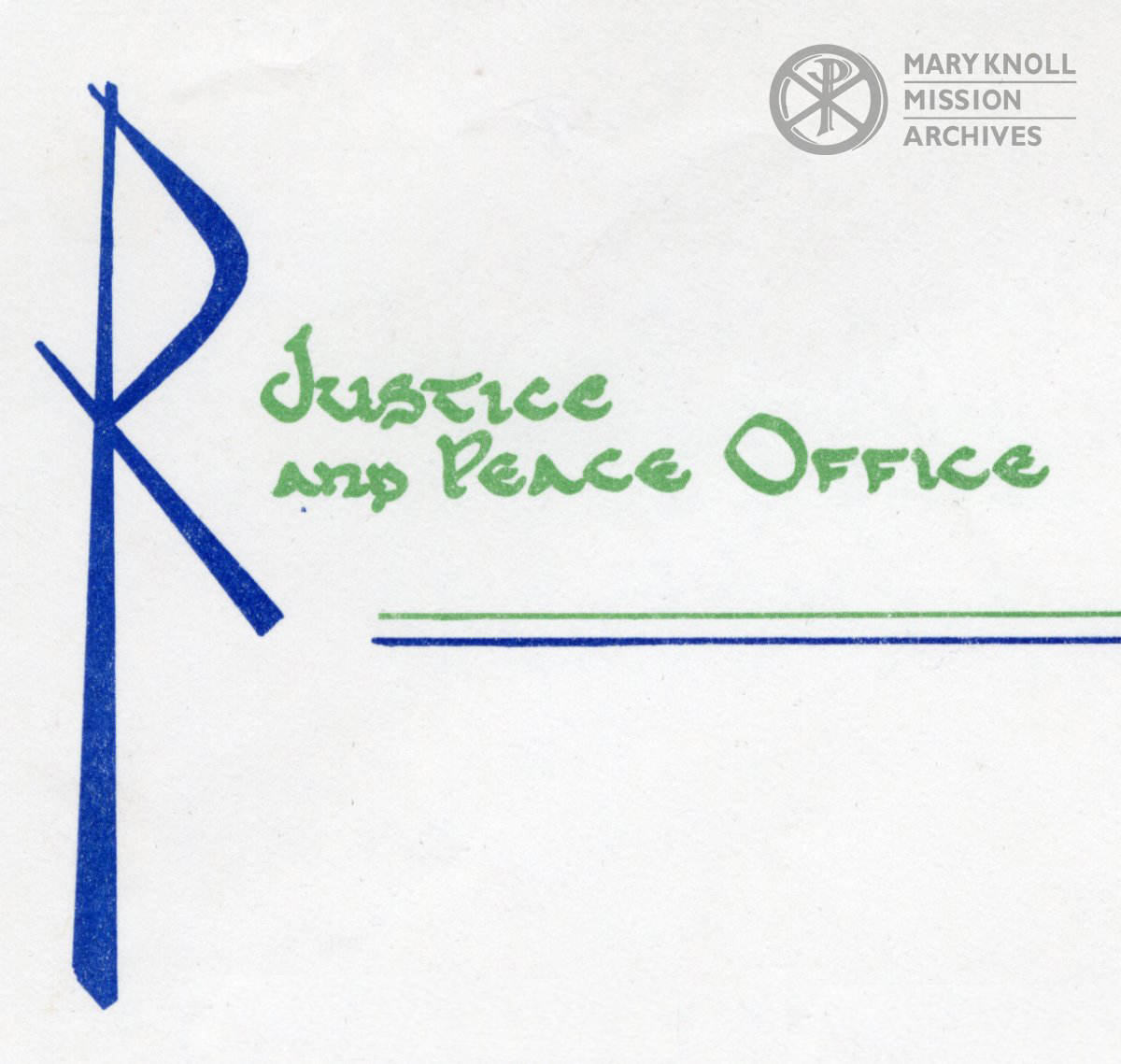 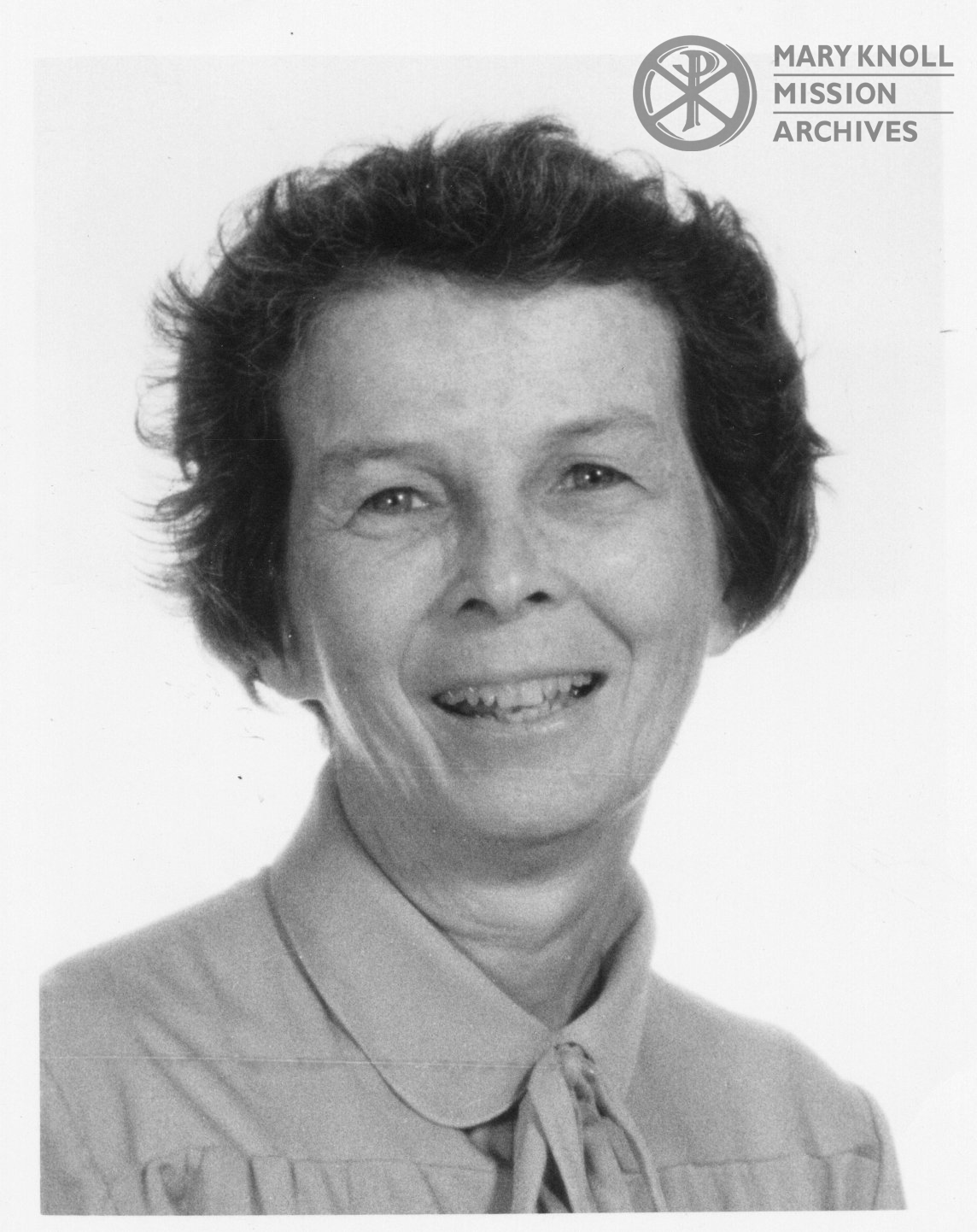 Around the same time, the Maryknoll Sisters were also considering a justice and peace ministry to tackle to increasing oppression across the world. The office was first founded as the Desk of Social Concerns in 1973, when the President of the Sisters asked Sr. Annette Mulry if she thought there was a need for the desk. The Desk was officially started in January 1974, and would actually follow a similar path to the Society’s office. Sr. Annette worked with the staff of the Justice and Peace Office to gather experience in Justice and Peace ministries and help shape her one-woman Desk into something greater. In 1980 more Sisters joined the Desk to help Sister Annette, and her Desk turned into the Office of Social Concerns. 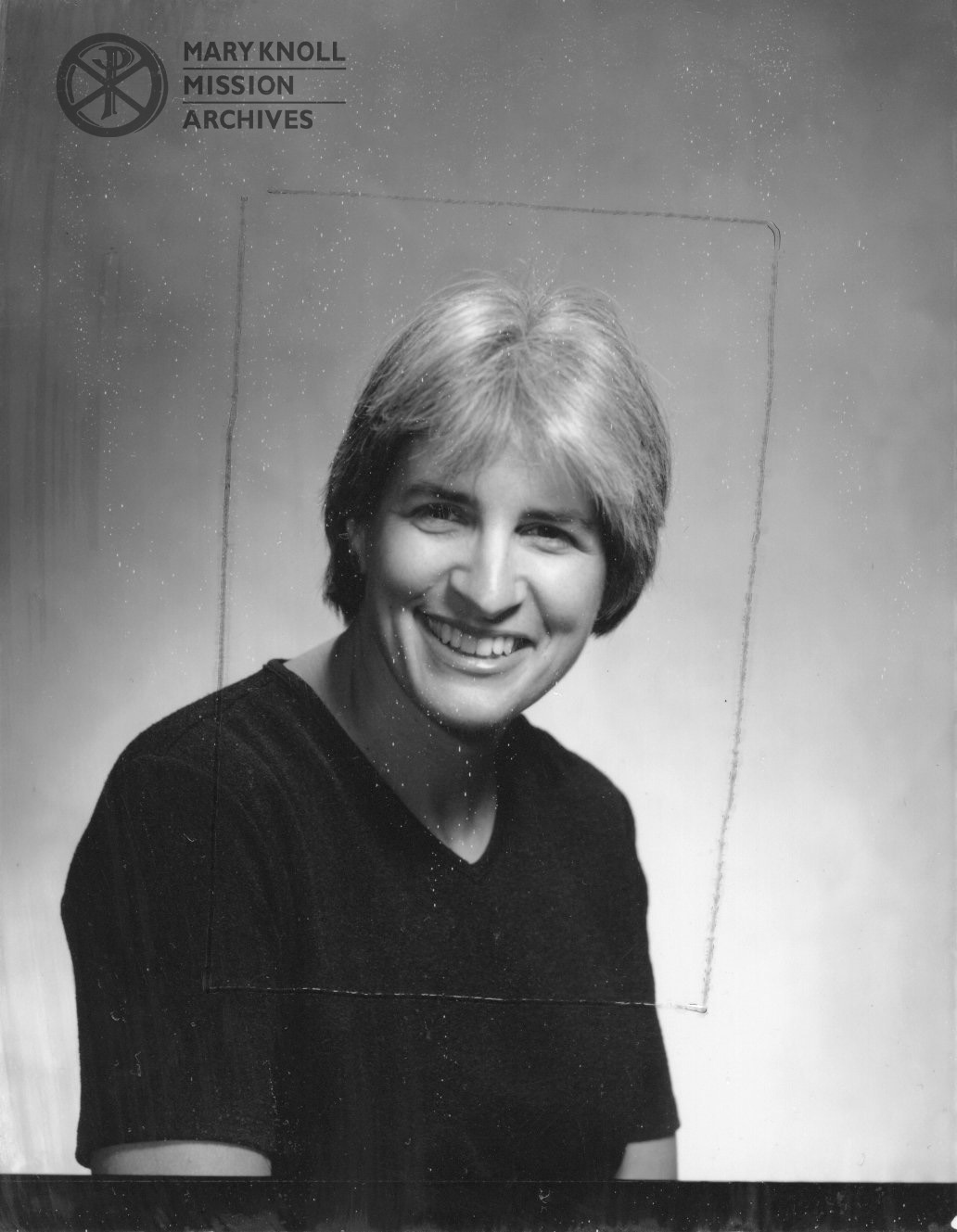 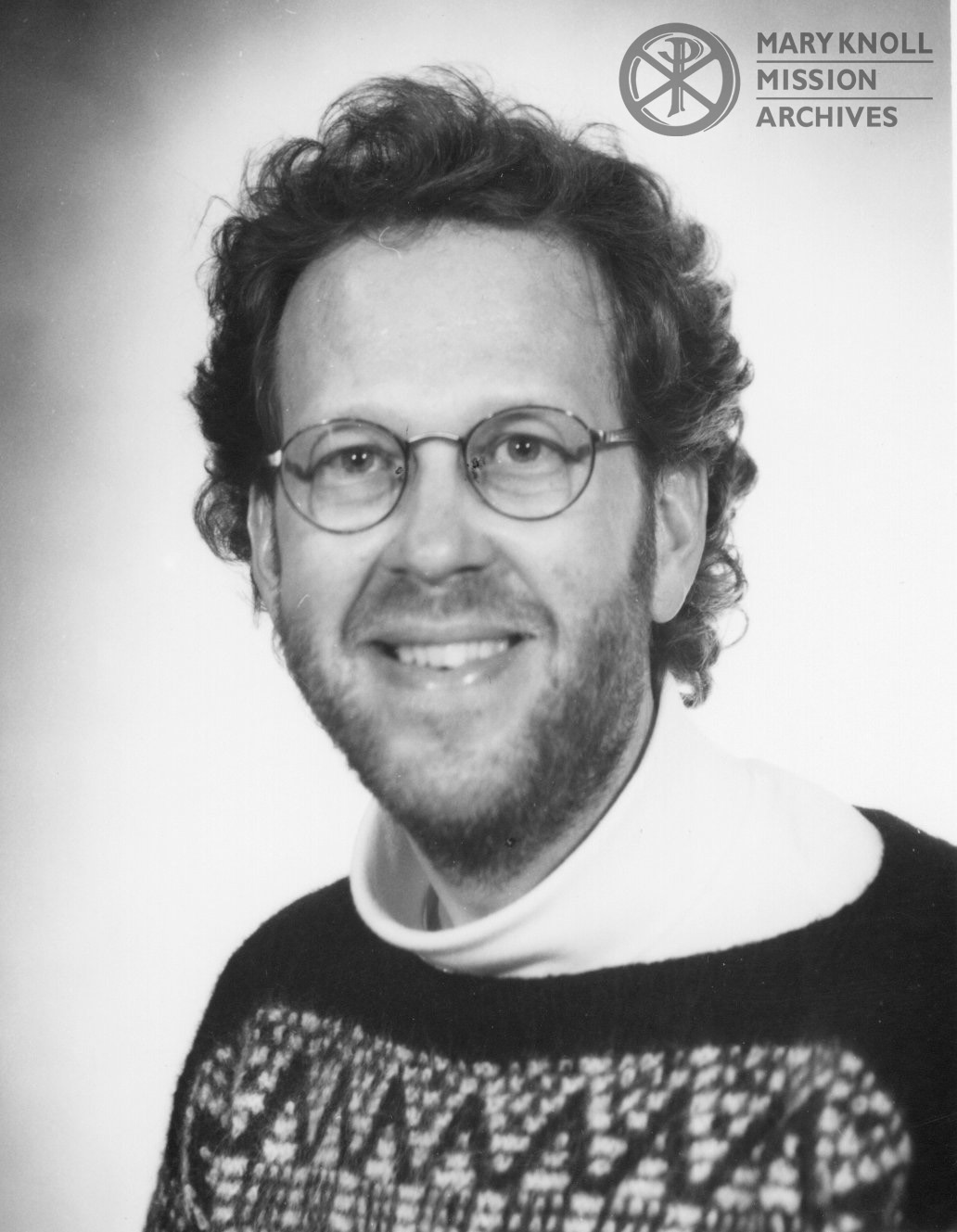 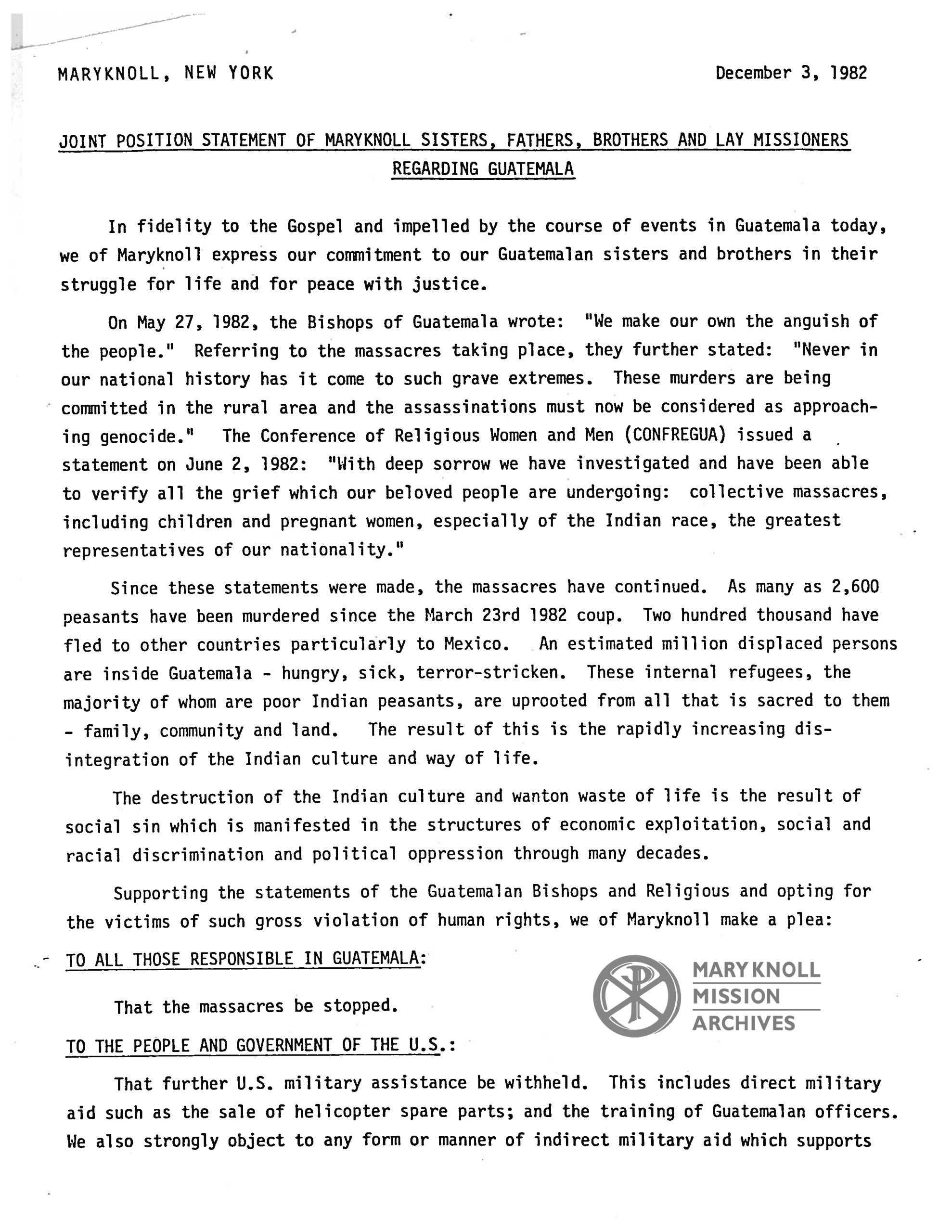 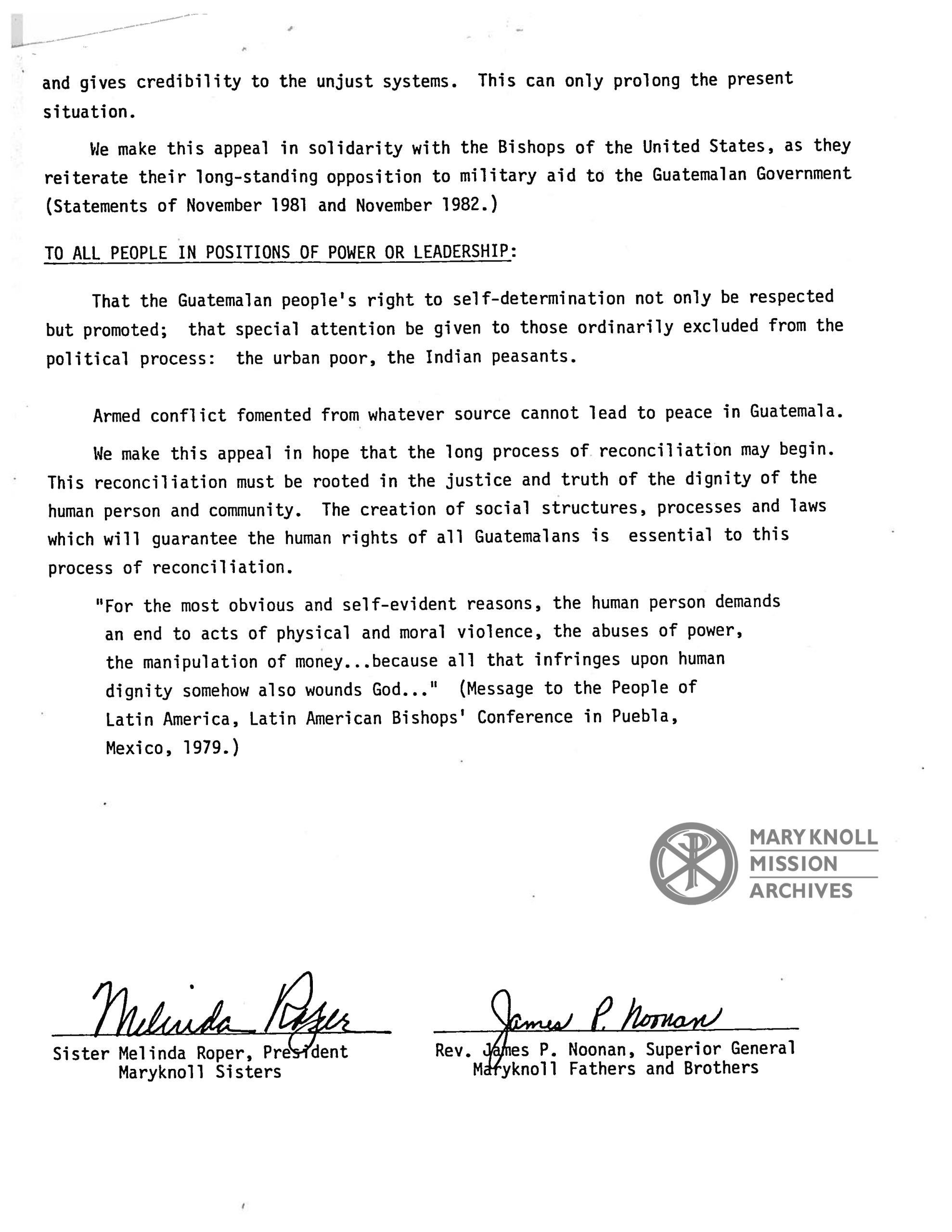 Even though the two offices were separate, they did collaborate, particularly during the 1980s when both offices would work together on key issues. The collaboration first started when both offices were still in their infancy, as a joint commission of both Sisters and Fathers was created in Peru on justice and peace issues. The seeds of collaboration would further be sowed in Latin America in the early 1980s, when rising tensions across the region compelled all of Maryknoll to take a stand against injustice. The statements on the left and right showcase the joint action of the Sisters and Fathers on human rights issues in Guatemala and El Salvador. Starting in 1982, both the Justice and Peace Office and the Office of Social Concerns would meet in Latin America to discuss their ministries in the region. Collaboration would continue into the late 1980s, with each office increasingly supporting the other. 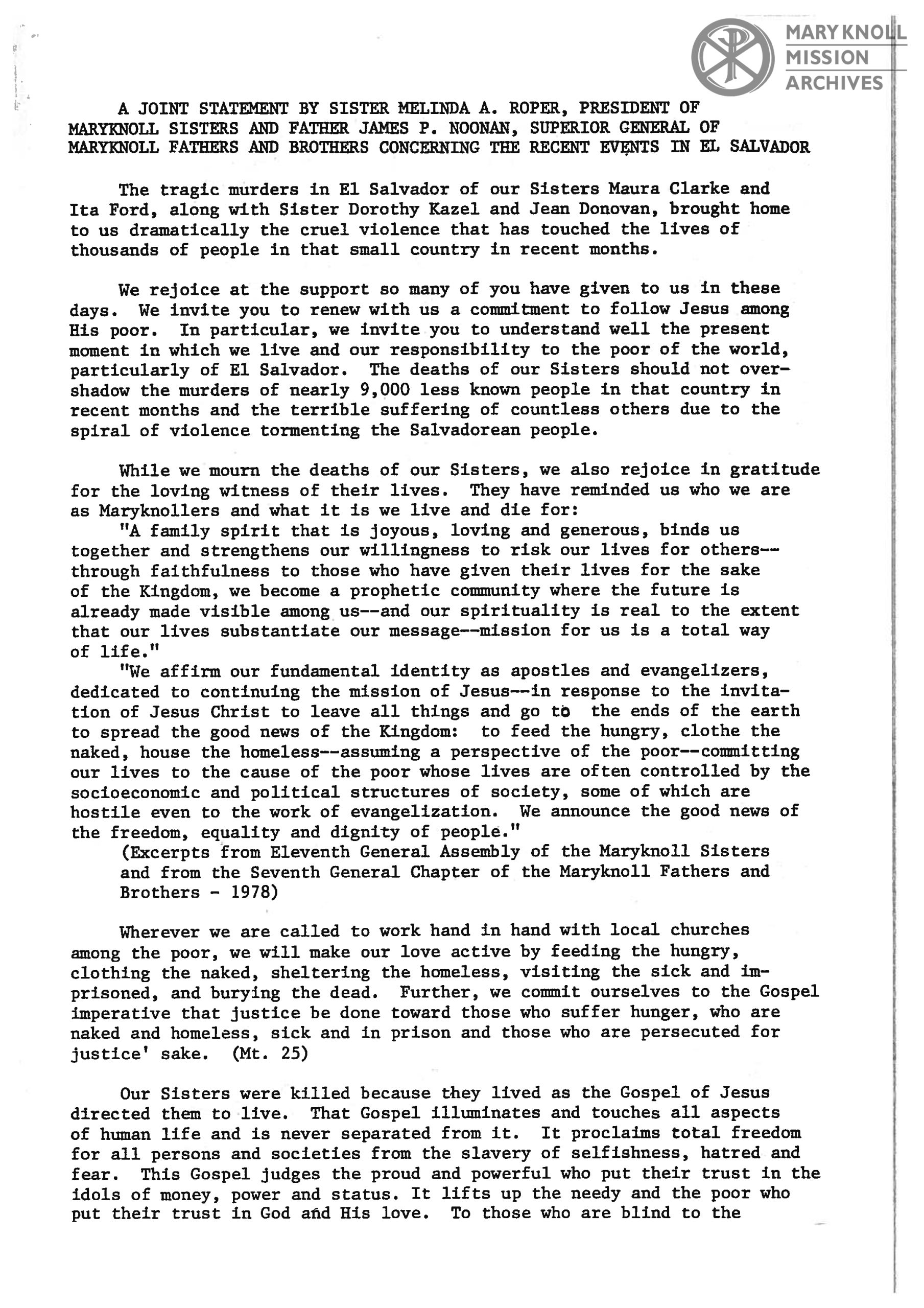 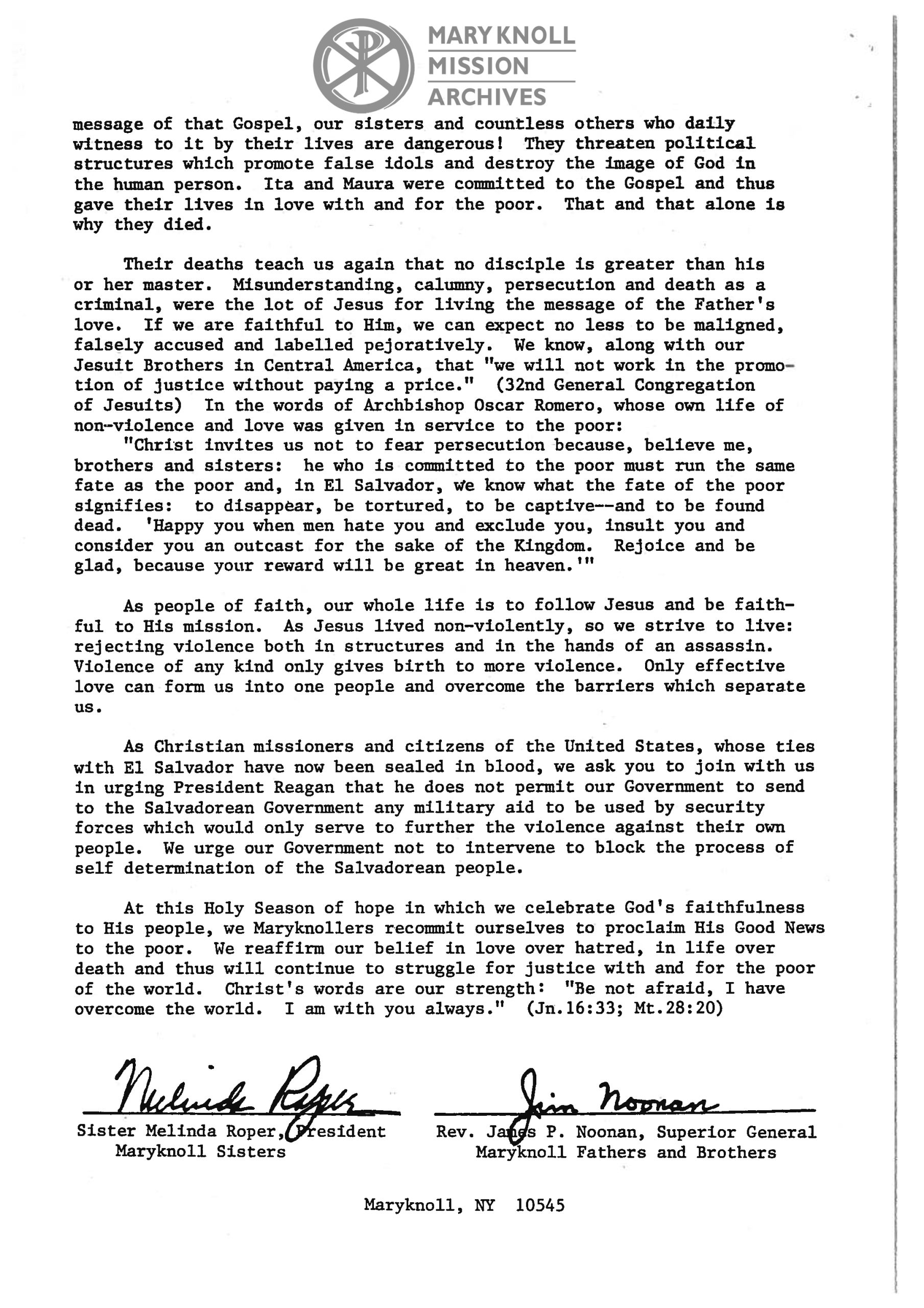 The question that remained was what exactly that change would look like. A coordinated effort of three offices? A unified team with members from each entity? Something completely different that expanded membership beyond Maryknoll? An ad hoc committee representing all interested parties was created to weigh these options. Among its members was future Office of Global Concerns director Marie Dennis. Marie worked as the Latin American Associate for the Justice and Peace Office beginning in 1989 and was an active advocate for justice and peace issues in Washington DC. From the many proposed ideas for collaboration, the committee narrowed them to two main plans: a single, unified office or separate offices with enhanced collaboration between them. 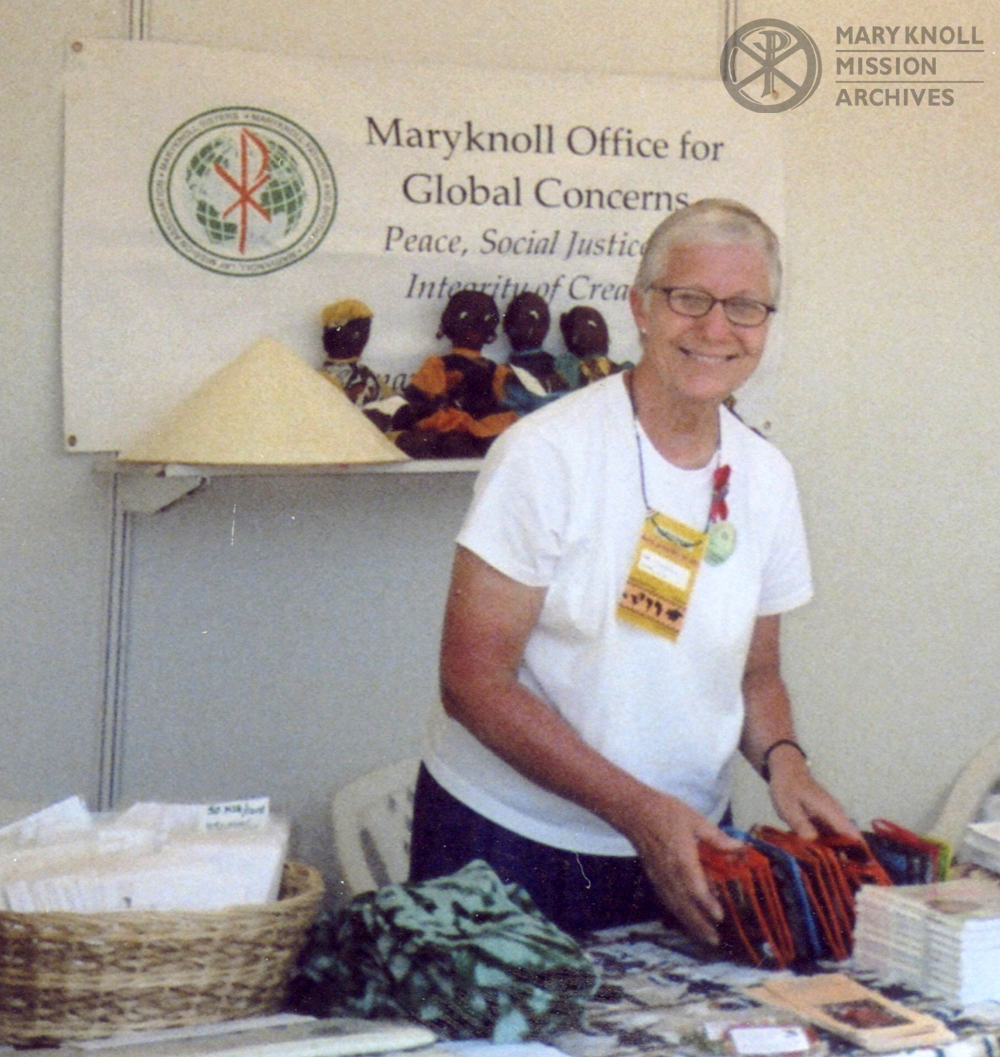 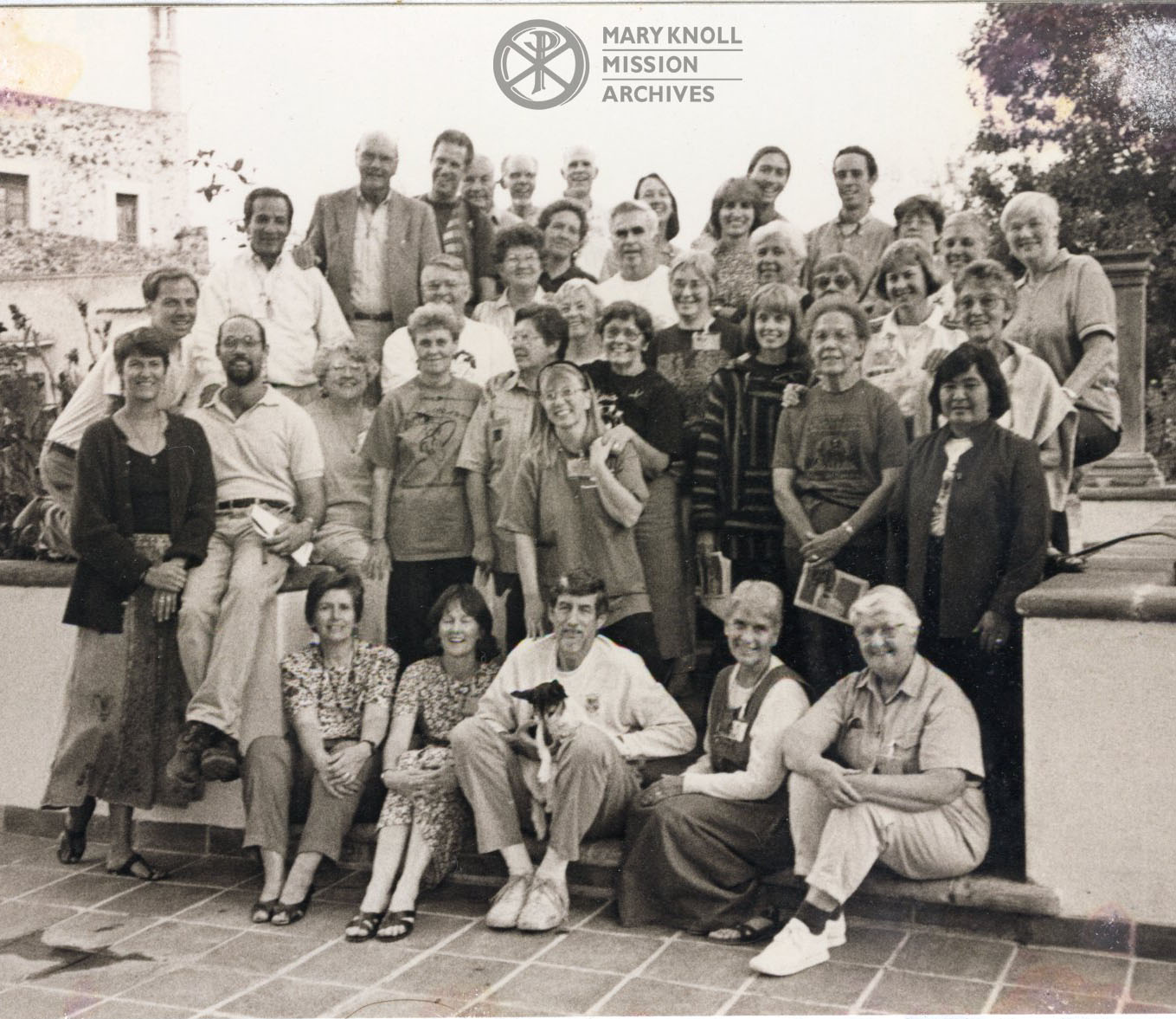 While these proposals were under consideration by leadership, Maryknollers from across the world involved in justice and peace ministries gathered for a conference in Mexico. The conference was the latest in a long line of Justice and Peace conferences held in Latin America. For this conference in 1997, the participants used this opportunity to discuss the idea of collaboration amongst all those who had worked in justice and peace ministries. This became an important step for the Maryknoll Office of Global Concerns as worldwide connections with other Maryknollers would help facilitate the research and education aspects of the office.

The final outcome of the deliberations came in November 1997. Maryknoll would have a unified office based both in Washington DC and at the United Nations in New York City. This would allow the office to stay connected with Maryknoll while also giving it access to connections necessary in advocacy work. It would go into effect on December 15, 1997 with a 6 month probationary period to work out any problems that might arise. An Executive Committee consisting of members of the Maryknoll Fathers and Brothers, Maryknoll Sisters and Maryknoll Lay Missioners leaderships would oversee the staff. 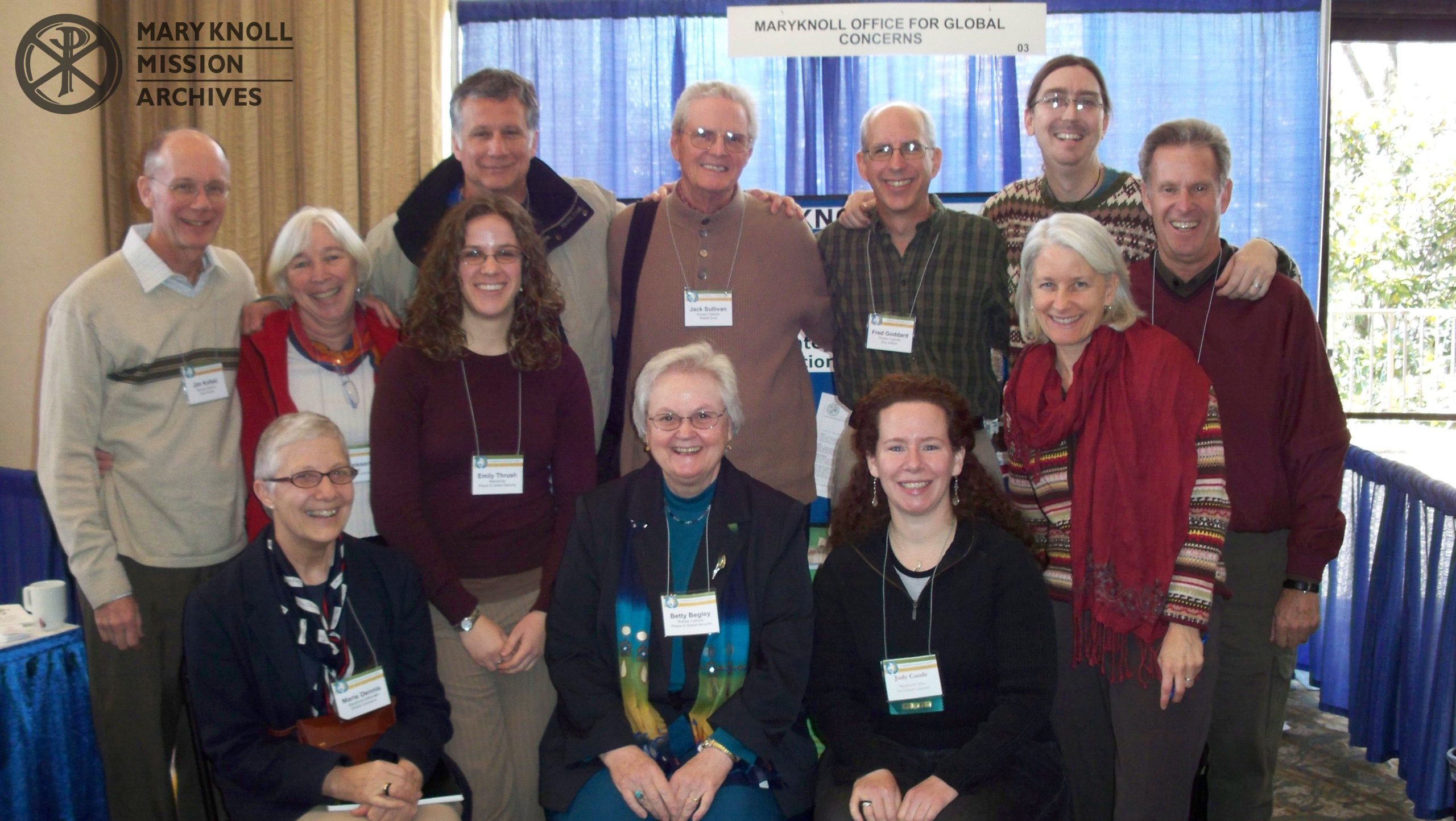 Today’s vibrant Maryknoll Office for Global Concerns comes from these roots. The office still maintains its main location in Washington DC with a Sister and a Father that act as representatives for Maryknoll at the United Nations in New York. Since its founding 25 years ago, the primary functions of the office in research, education and advocacy of social justice issues has never changed. If you would like to learn more about the current work and staff of the Maryknoll Office for Global Concerns, please visit their website at the link​ here.