Today, August 4th, is the feast day of St. John (Jean-Baptiste-Marie) Vianney. Fr. John Vianney was beatified on January 8, 1905 by Pope Pius X, who six years later, on June 29, would approve the formation of the first Catholic Foreign Mission Seminary in the United States, which would become the Catholic Foreign Mission Society of America (more commonly known as Maryknoll). Pope Pius X gave his blessing to begin both of these journeys.

In 1925, the journey of John Vianney reached sainthood, as he was canonized by Pope Pius XI, who four years later made him patron saint of priests. Growing up during the French Revolution when priests were forced to work in secrecy or face execution, John looked up to priests as heroes and through the years strove to become one. This dedication to the initial idea and his eventual position as a parish priest lead to his chosen patronage.

In 2016, a little over one hundred and five years after Pope Pius X’s blessing, Maryknoll’s journey continues. This journey is made up of thousands of stories from each missioner that has ever been a part of Maryknoll.

Let us share with you a story from Fr. Joseph Healey, as he reflects on his mission work in Africa.

“I remember the time in Iramba Parish in Musoma Diocese, Tanzania when I drove in my Toyota truck to the distant outstation of Kemugongo to celebrate the 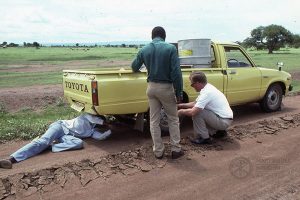 Easter Liturgy during the rainy season. Half-way across a swampy plain the mud became so thick that I had to abandon my truck and walk the remaining one and a half miles in ankle-deep mud during a light rain. I arrived at the outstation chapel wet, dirty and tired. The local Christians ran toward me clapping and dancing with joy. ‘The Padri has come. We will have Mass,’ they shouted.

Immediately I forgot my wet, muddy clothes and my tiredness. I got caught up in the enthusiasm of the people as we prepared to celebrate the Easter Eucharist – Christ’s resurrection which is the central event in our Christian faith. As I looked out at the happy, excited faces in that outstation community I realized in a flash that this is what Maryknoll in mission is all about.”