We take a moment today, on the 50th anniversary of his death, to reflect on the life and message of Dr. Martin Luther King Jr. using his words on “A missioner’s spirit.”

The ultimate measure of a man

is not where he stands

in moments of comfort and convenience

but where he stands

at times of challenge and controversy.

The true neighbor will risk

his position, his prestige

and even his life

for the welfare of others.

he will lift some bruised

to a higher and more noble life.

[as printed in the March 1976 issue of Maryknoll] 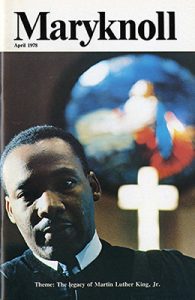 The April 1978 issue of Maryknoll magazine commemorated the tenth anniversary of Dr. Martin Luther King, Jr.’s death. It was dedicated to him as a “modern prophet of justice and apostle of change through Christian nonviolence.”

Included were articles by

“To many people, Martin Luther King, Jr., is a symbol of reconciliation, a symbol of hope for the downtrodden and oppressed. His message to us was to love our neighbor and to treat everyone as brothers and sisters in God’s family. We who carry on his work in his name believe that, while our efforts may not be completed in our generation, we must never stop trying to push back the barriers of discrimination, hatred and suffering. And we must do it with love, the love that is at the very core of nonviolent social change.”

Cesar Chavez – “He showed us the way”

“In honoring Martin Luther King, Jr.’s memory we also acknowledge non-violence as a truly powerful weapon to achieve equality and liberation – in fact, the only weapon that Christians who struggle for social change can claim as their own. Fr. King’s entire life was an example of power that nonviolence brings to bear in the real world.”

“What a great human being, what a model, what a symbol we all have in Pastor Martin Luther King, Jr.”

“We dedicate this issue of Maryknoll to the memory of Dr. Martin Luther King, Jr., because we fell that in Doctor King not only do we have one of the greatest Christians of all times, we have also one of the greatest apostles of creative nonviolence as a means to bring about justice. Dr. King was and continues to be through his writings one of the best spokesmen of a message which every missioner from the United States should be proclaiming to the world.”