In 1991, the Maryknoll Sisters began two new missions, in American Samoa and East Timor. In honor of the 30th anniversaries of these missions, this month we look back on the Sisters’ first impressions of their new assignments. We also revisit the Sisters decades later to see the impact of the new ministries and collaborative projects in their mission communities.

First we visit American Samoa. The Sisters were in mission in American Samoa from 1991 to 2012, with Sisters Marilyn Evans and Kathleen Skenyon the first to arrive. As you can see from Sr. Kathleen’s reflection in the Central Pacific Region newsletter in 1992, the Sisters were busy from the start!

“This school year was a program of direct library instruction to 900 students in four schools weekly for grades K-12. When I return to Pago after [the Regional Assembly], the program will become training sessions for para-professionals. The freedom to develop the curriculum and to train student library assistants enabled me to present myths, legends, and present-day reality of mission areas, historical overview of accomplishments of women, greater knowledge of Pacific Nations, and a most enjoyable Book Fair.” 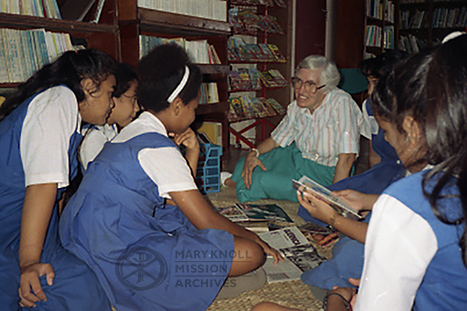 Twenty years later, the Sisters’ numbers had shrunk, but not their impact. In a 2010 Central Pacific Region newsletter, we catch up with Sr. Marilyn and her work in early childhood education.

“Sister Marilyn Evans has been in American Samoa since 1991 by invitation…to open a Montessori Early Education Center, a diocesan project of the Eastern district of American Samoa. Marilyn not only meets 3-6 year old children but also trains teachers in the Montessori way of education, counseling needy families in the area, and women empowerment through her daily interaction with teachers and mothers.” 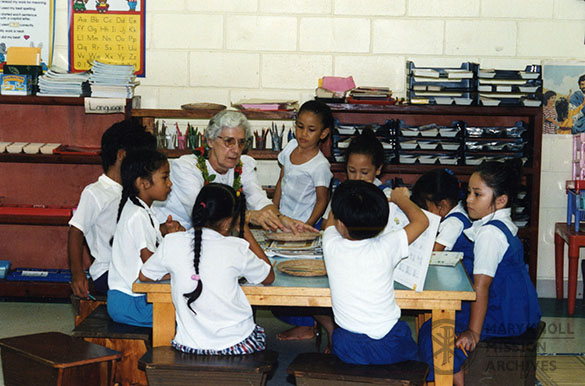 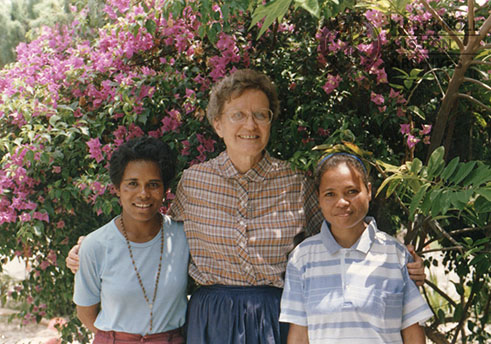 Next we visit East Timor. When Sisters Dorothy McGowan, Susan Gubbins, Rosemary Huber, Harriet Lum, and Nora Maulawin began their ministry, they worked primarily through parish ministry and education. One of the Sisters reflected on this work in the East Timor newsletter in August 1991.

“Almost as soon as we got here, our Pastor had us doing Lenten Recollection Days for the junior and senior high students, about 400 in all. Susan and Dottie taught English and math enrichment classes several hours a week at the government junior high school, and since April Harriet has been principal of the Catholic high school… Since settling in Aileu we have been involved in this commemoration [of the diocese’s 50th anniversary]…Earlier the women of the diocese had a gathering and the follow-up was the formation of a Catholic Women’s Group in the parish which we also helped to facilitate. The major activity was the Congress of the Laity held from Jun 17-21. Ten representatives from each parish were invited. Rosemary Huber helped our delegates in the preparation and also attended the congress.” 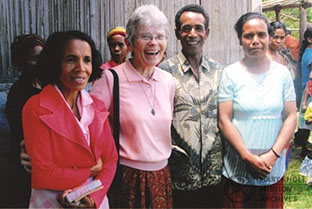 The Sisters are still in mission in East Timor. Currently, they work in several community-based programs. These include income-generation programs such as community gardens, coffee farming, and a knitting/sewing project. They also include public health and high school education, and youth group formation. In 2011, Sr. Dorothy McGowan considered the impact and collaborative development of one of the Sisters’ programs.

“When we first came to East Timor in 1991, Sr. Susan [Gubbins] and I wanted to work with women and so we visited many villages in Aileu and talked to groups of women about their needs. The majority of them talked about health needs for their children

and themselves and so our “Community Based Health Program” slowly came to be. One of our first tasks was to introduce the concept of health motivators (or promoters) in each of the villages. Each motivator was responsible for 20 families living close to them.  They would be a sort of bridge between the needs of each village and the health services that were available in our central clinic, the government clinic and the hospital in Dili… One couple who attended our first training are Manuel Beremau and his wife, Rosita Quintão… Being health motivators had added meaning, challenge and joy to their lives and they, in turn, have given witness to commitment¸ generosity¸ participation in community service and a wholesome Christian family life.”

Happy 30th birthdays to the Maryknoll Sisters’ missions in American Samoa and East Timor, and best wishes to those Sisters working toward new missions today!