As we noted in A Century Ago, 100th Anniversary of Maryknoll Sisters’ First Departure for China, at 4pm on September 12th the first six Maryknoll Sisters began their journey overseas to the mission field. They had begun their adventure into the unknown. An unknown that those remaining at home could only imagine. There were no cell phones, emails or, for that matter, internet as a whole to remain in touch with the Maryknoll community, their families and friends as each experience that brought them closer to China occurred. Their only means of communicating was through handwritten diaries and letters. Handwritten diaries and letters that would take their time, while carrying so much hope, relief from anticipation and the responsibility of bringing the news of this grand adventure to everyone back home.

So what did those at home do? They waited. Waited in anticipation of the first bit of news they would receive from their Sisters. I was curious myself what happened next. We’d explored the building excitement as the first six Sisters to depart for China were announced in Adventure Awaits. We celebrated the 100th anniversary of the day they left to begin their mission work in the field afar. But what next? It certainly isn’t where their story ends. It is only the beginning!

I patiently began searching for this next moment and found it in the Maryknoll Distaff 1921:

Excitement ran high on November 4 when both Los Angeles and China diaries arrived. They were so good, Mother read all at one sitting, even though the hour grew late and later still. It was all too good to divide. They wanted nothing but MORE.

How proud of each Sister in Los Angeles and Hong Kong every single Home Knoll Sister was.”

After seeing this entry, I dove straight into the Maryknoll Sisters Diaries collection for the Motherhouse diary entry dated November 4th, 1921 to see if there was a more detailed description of that evening, and there was:

“The house became greatly excited at about dinner time when Mother announced a thick packet of mail sent from Yokohama. It was harder than you far offs can realize for us to wait until after Holy Hour and after supper to hear from you.[..] Dishes and Novice class kept some from early work on the Field Afar, but by 7:45 we all were there and Mother gave us the treat. She read and read and read the many letters and interesting diary of the first China band. We sympathized as best we could with Father Kelley and Sister Monica, but you put it in so light a fashion that true sympathy was at times a bit far fetched. On the whole you had a fine trip didn’t you. How we did enjoy Mother Paul’s bonnet crush – that’s a new kind of a one – may we be spared! And Sister Lawrence, your ‘Laudamus Tay’ was great. Sister Rose, we could just hear you say, ‘Glory, but I’d like to say Hello Mother.’ Baby Imeldy, your art work, the ocean-liner-cartoons, are on the public bulletin board. When some of us cross the brine, we’re going to bid for Sister Barbara to be our nurse. It grew late when we finished your ‘Pistles, but Mother couldn’t put off the Los Angeles installment of diary which was produced after much cheering and clapping[.]”

Now beyond this, these diaries sent home were later edited and shared with those who received or had access to The Field Afar. To demonstrate this I found a handwritten En Route diary entry dated October 14th, 1921 and the latter publication of it in the February 1922 issue of The Field Afar on page 40. Below you can see the original script and the printed version that brought these words to the masses: 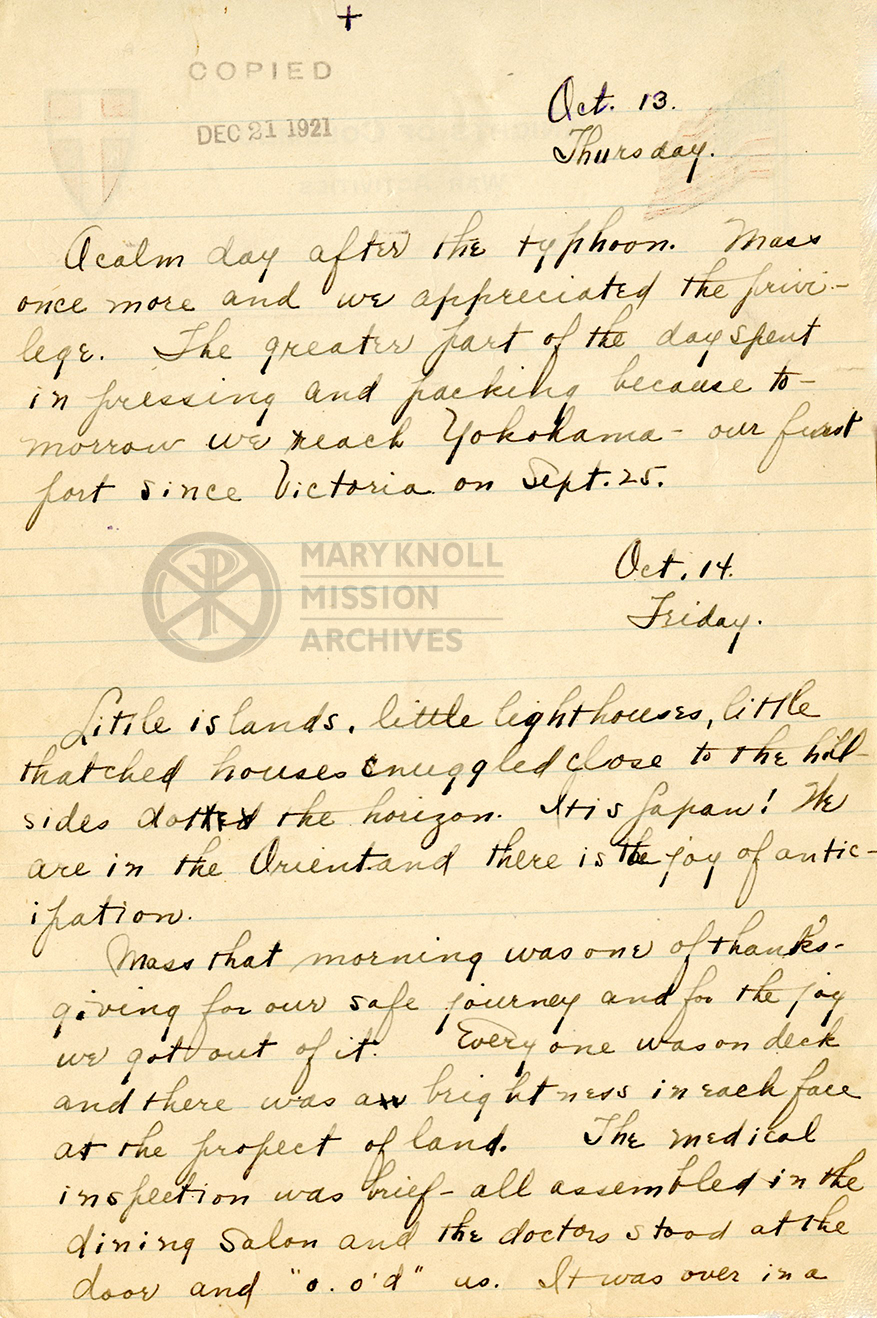 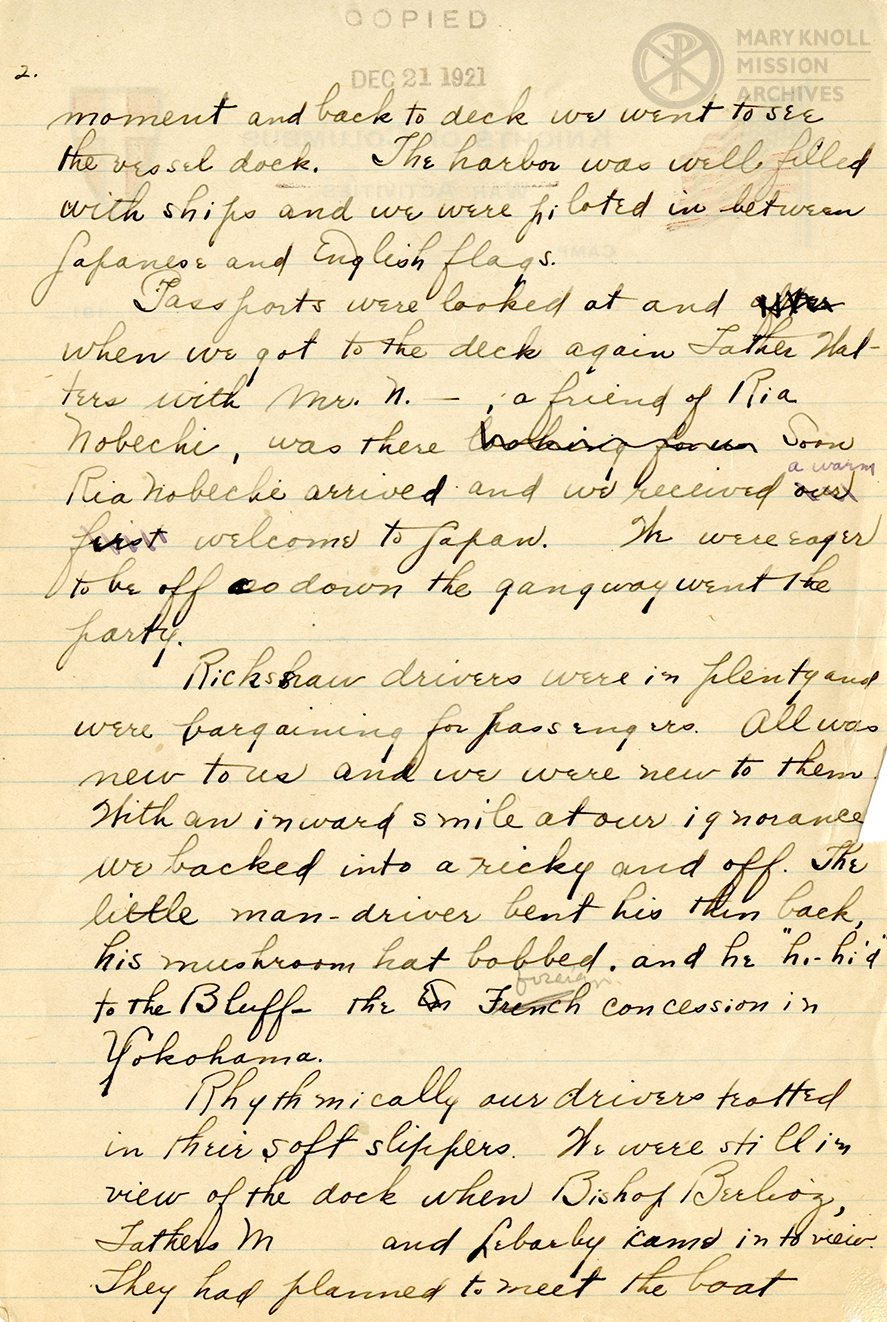 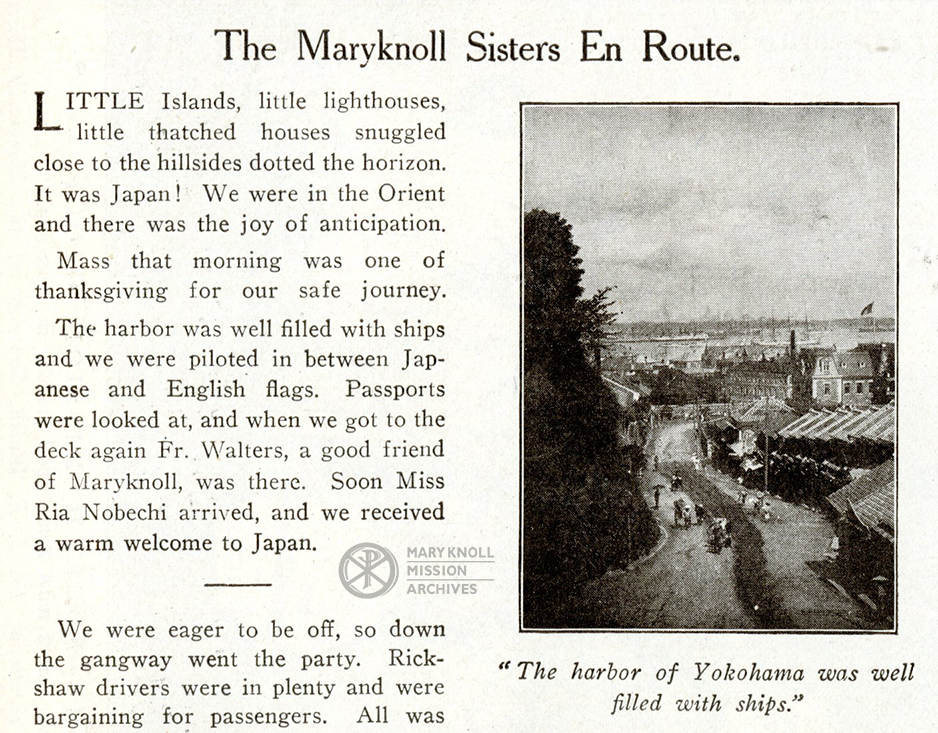