Sometimes when looking through the archival materials on behalf of a researcher you come across something that catches your eye.  This was the case with me when I was looking through the March 1951 issue of Maryknoll Magazine.  I turned the page and the word “cat” jumped out at me.  Not something you typically find in Maryknoll’s magazine about mission.  The article, titled “Charley’s Hero,” profiled a cat named Charley and his owner Maryknoll priest, Father Francis G. Murphy, missioned in Kweilin, China before World War II.

I thought I would share this amusing story in the hopes that it will brighten your day as it did mine. 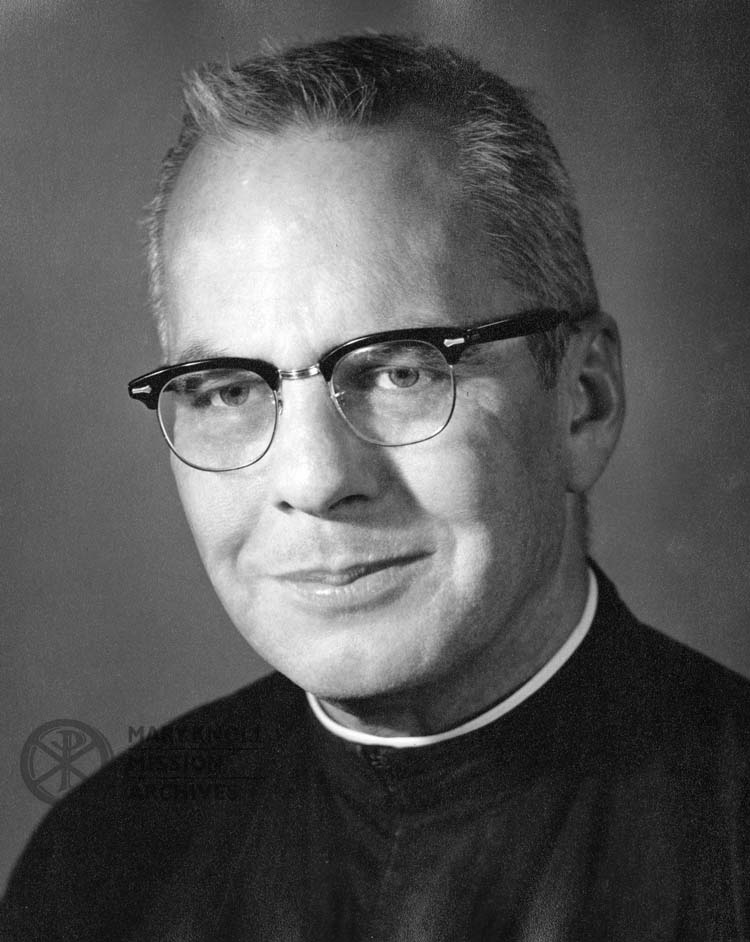 Although Charley was chosen at random from a group of kittens, he was the perfect picture of a clerical cat: black and white, with the black coloring forming a moustache.  He resembled and was named after our boyhood here of the silent films.

Charley, too, had his hero and thereby hangs a tale that might well have been Charley’s own.  The object of hero-worship is Father Francis Murphy – than whom no kinder soul ever breathed.  Father Frank’s kindness is shown in the care of hundreds of patients who flock to his dispensary daily.  No case is too hopeless, no sore too disgusting for the personal care of this big priest with the big heart.

No member of the household is too lowly to feel his sympathy.  Charley felt it, and in the dreams that only cats can have, there always loomed the presence of a benign soul.  Mary had her lamb, but no more devotedly than Father Frank his Charley.

Came the day when Charley followed his hero as the kindly priest ambled to the garden to pitch horseshoes.  Had it been in the power of Father Frank to explain the intricacies of that delightful game to Charley he would have taken great delight in doing so.  But alas, as well might he try to explain the Theory of Relativity to an uncomprehending feline mentality.  But one thing Charley did know: if a bird flying through the air be brought to earth, it tastes relatively good.

With a heart filled with contentment, Charley lay on the grass, observing the strange movements of his hero with many a feline chuckle.  Charley did not follow the cast of the horseshoe as it left Father Frank’s hand.  But he did see an object resembling a succulent pigeon, suddenly swooping low over the earth.  A decision had to be made and Charley made it.

Father Frank could not bear to look at Charley…[Thinking he hit him] Father Frank said sadly, “Poor Charley! We’ll have to give him a bang-up funeral, complete with firecrackers.”

But then – shades of Conan Doyle – the case became complicated.  [When Father Frank looked] the cat disappeared.  “What saddens me”, said Father Frank, “is that Charley was more than a cat, he was a personality.”

But lo, a faint meow, issuing from a pile of wood shavings around the horseshoe ring, announced to the world the revival of Charley!