This year we celebrate with a collection spotlight on the Maryknoll Fathers and Brothers Mission Diaries,1912-1969

What is a diary to you?

For many, it’s a private account of a person’s life experiences and thoughts.
For some, it’s a datebook for appointments and important days.
For Maryknoll missioners it was a way of capturing and sharing daily life with their superiors, missioners-in-waiting back in the U.S. and American Catholics.

Maryknoll Fathers and Brothers in all missions, houses and educational institutions were required to write monthly diaries and submit them to the Society’s leadership body, the General Council, at its headquarters in New York. This practice remained in effect from the Society’s beginning (1911) until the late 1960s.

First, they provided leadership direct reporting on the mission, house or educational institution’s activities and challenges.

Second, they were a means of informing and inspiring seminarians and Maryknollers yet to be assigned to mission. Edited versions of the diaries were read at mealtimes and, beginning in the late 1930s, re-formatted and distributed in writing through diary digests.

Third, they provided content for the Society’s publication The Field Afar / Maryknoll magazine. Sharing missioners’ experiences with American Catholics served to educate about mission generally and elicit support for the Fathers and Brothers work. 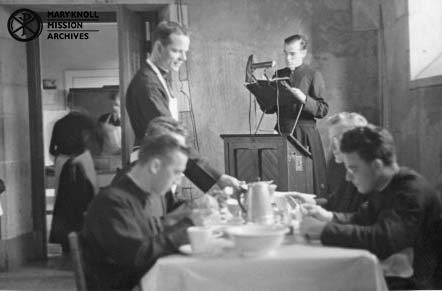 The Mission Diaries collection housed in the Maryknoll Archives contains both handwritten and typewritten monthly diaries by Maryknoll priests and Brothers dating from 1912 to 1969. They are organized into four categories:

1) Overseas missions in Africa, Asia, Middle America and South America, 1919-1969 – Authors of these diaries recorded details of daily life as well as accounts of local events, culture and traditions, and socio-economic, political, agricultural and/or medical conditions in the area. Missioners in many of these areas also wrote travel diaries that provide accounts of travel to or within the mission areas. They include the following countries:

3) Diary digests, 1937-1968 – Contains monthly aggregations of diaries from overseas missions and US operations for Society members edited by either the General Council or The Field Afar staff.

4) Departures, 1918-1942 – Contains accounts of missioners traveling from Maryknoll, New York, by car, train, boat and plane to their assigned mission fields for the Society’s first 29 Departures 1918-1942. Additional travel accounts to and within mission fields can also be found in the individual mission areas series. 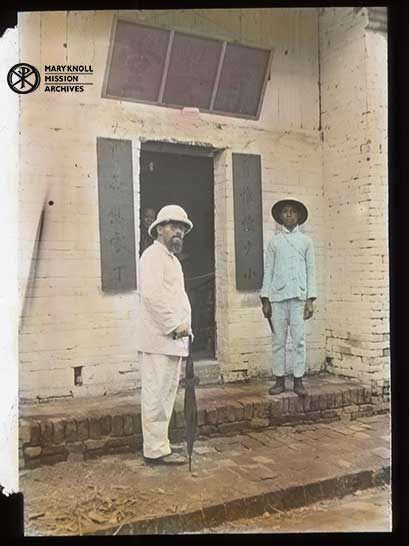 Many of the diaries, especially those from the 1920s, 1930s and 1940s, are heavily marked up with edits by either (or both) the General Council and The Field Afar staff and occasionally the author himself. These edits reflect how the diary text was refined for use both internally among the seminarians and Maryknollers at the Center and externally in the Society’s publication The Field Afar / Maryknoll magazine.

William O’Shea was the third student to enter the seminary in Hawthorne. He was ordained on December 5, 1917. For two years he assisted in training the new students at the Venard (Clarks Summit, PA) and in July of 1919 he received his assignment to China. He arrived in Kochow in December 1919 and immediately started language study. He also helped in the direction of the local orphanage. Fr. O’Shea remained in Kochow until November 1920 when a new mission opened in Wuchow and he was assigned to it.

Fr. O’Shea’s October-December 1919 diary illustrates how these accounts moved from personal to public. It features writer’s corrections and editors’ refinements.

On the back of the 1919 diary’s first page, Fr. O’Shea acknowledges its upcoming transformations in a memo to Fr. James A. Walsh, Superior General and Co-Founder of Maryknoll. 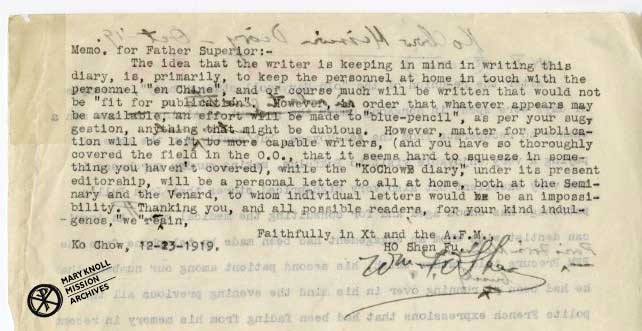 Memo, for Fr. Superior:-
The idea that the writer is keeping in mind in writing this diary, is, primarily, to keep the personnel at home in touch with the personnel “en Chine”, and of course much will be written that would not be “fit for publication”. However, in order that whatever appears may be available, an effort will be made to “blue-pencil”, as per your suggestion anything that might be dubious. However, matter for publication will be left to more capable writers, (and you have so thoroughly covered the field in the O.O.*, that it seems hard to squeeze in something you haven’t covered), while the “KoChow diary”, is under its present editorship, will be a personal letter to all at home, both at the Seminary and the Venard, to whom individual letters would be an impossibility. Thanking you, and all possible readers, for your kind indulgences, “we” remain,

* Observations in the Orient by Fr. James A. Walsh, M.M.
** American Foreign Missions

Fr. O’Shea’s diary would be transformed into serial columns in the 1920 issues of The Field Afar. The images below show the text’s evolution from typewriter in China to blue-pencil and printing press in The Field Afar offices to the homes of American Catholics. The second paragraph in the image on the left becomes the second paragraph of the third section of the third column in the middle image. The text begins “Before starting retreat…”

Thanks to these meticulous diarists, a century later we can still be inspired by their mission journeys. 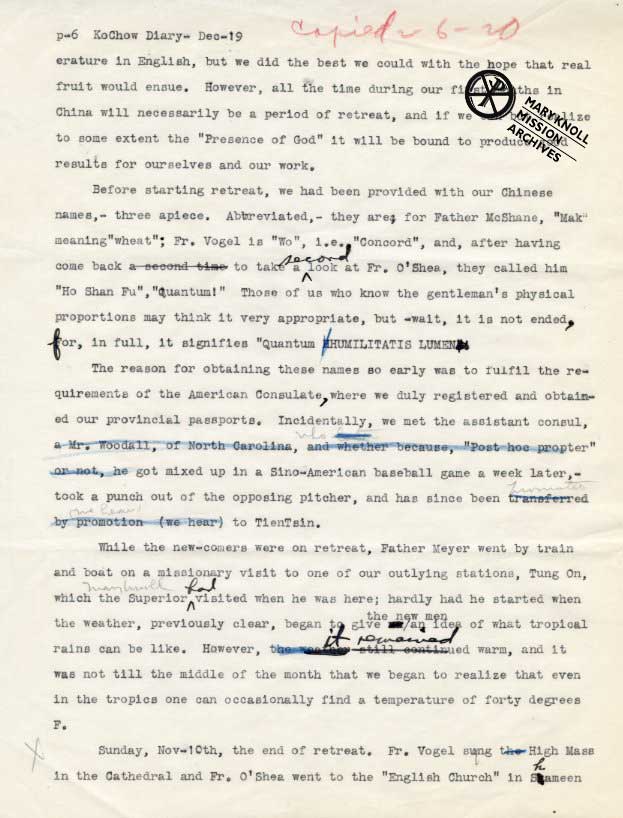 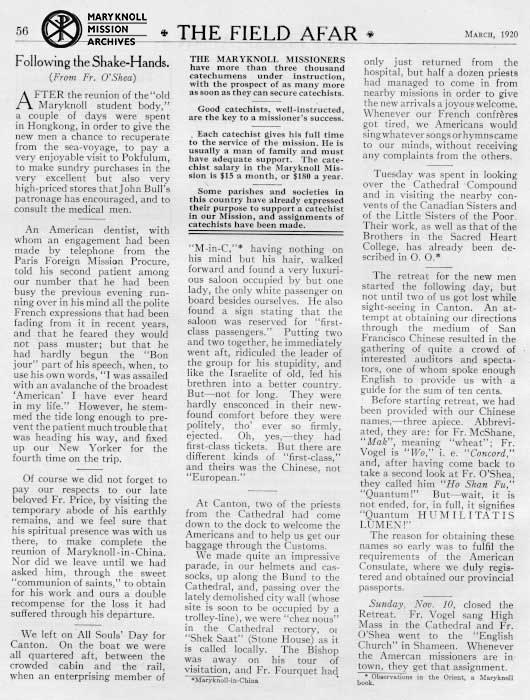 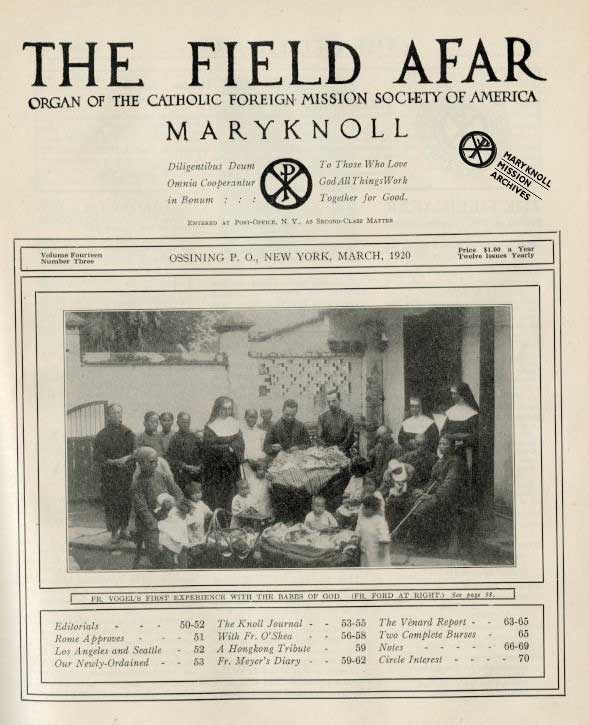