For my blog this month I wanted to highlight one of our underused collections: the Sisters’ War Narratives.  It’s an artificial collection originally compiled by the Maryknoll Sisters’ leadership.  The collection provides primary source accounts of the Sisters’ experiences in war or conflict during the 1940s and 1950s in China, Japan, Korea, Manchuria, the Philippines, and the United States.

We have over 100 individual accounts of what life was like during World War II, the China Communist Revolution, and the Korean War.  I have pulled passages that showcase what the Sisters experienced during this time. 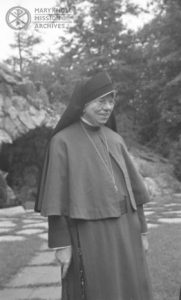 “The Feast of the Immaculate Conception dawned clear and bright; at a quarter to seven the phone rang and an American friend told that the U.S. had declared war on Japan at midnight.

We went to the church for the 7:15 Mass with our hearts full of prayers for the guidance of those in places of responsibility.  Just as the prayer to St. Michael was being said, we heard the faint sound of a siren, and those of us in the back row noticed the others pricking up their ears in wonderment.

Stepping out of the church we were assuring one another that it had only been the eight o’clock whistle, when we heard the whirl of planes and looking up we saw thirty planes in formation of three’s flying quite low over our heads.  Still incredulous and hoping against hope, we declared it was only practice, as we watched them fly east.”

“On January 7th [1951] we had a letter from Ng Fa telling us that the officials were there and registered everything.  That gave us time to prepare.  We had Hong Kong money on hand, but had already buried that in the flower garden, right beneath the window of the government headquarters next door.

Next day about two o’clock we were suddenly surrounded with armed men at each door.  All on the compound were called over to the church…After finishing at the refectory and church, the group of about eight came to the convent.  They scattered all over the house; so that it was impossible to watch them all…They were fascinated with some paper napkins and tablecloths, crepe paper, and most of all, with a little crucifix mounted on a standing mirror.  Every nook and corner were searched thoroughly.  The stove was poked.  The water jug run through.  Our supply of sugar and flour run through with the hand.

They seemed to be searching for guns.  When they opened our money box, it was gone through—looking for foreign currency.  There was one man in the group who knew English quite well…All our mail, mostly Christmas mail, was taken to be reread.  We never saw it again.” 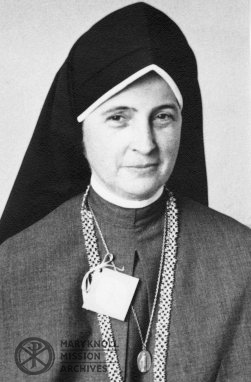 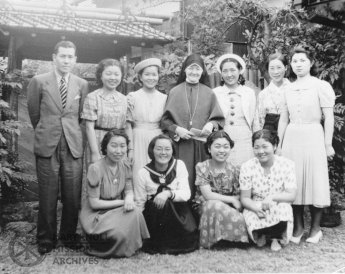 At the start of World War II, Sister Gemma Shea was missioned in Tokyo, Japan at the Holy Family Convent.  Once war broke out, Sister ended up in Seibo, at a hospital run by the Franciscan Missionaries of Mary.  In her account, Sister Gemma writes, “On September 1, 1942 I receive word from the police to be ready to sail on the Asama Maru on the 3rd.  We hurriedly packed, [and] said goodbye to our friends…” However, word soon came from Police Headquarters that the sailing date had been postponed.  “So the bags still packed, and wearing Sister Rose Anne’s old clothes I waited with her in our now bare room until September 16th, when we were called during breakfast to appear with our baggage to leave for Interment.  We all started off not knowing where we were bound.  Everyone was so choked up, no one even spoke or asked a question.  The police detective who escorted our car…told us later he was heartbroken to see our stricken faces and the grief of those left behind.  He loved the Sisters, and he and all the police had received nothing but kindness from the hospital staff.  There are certainly times when one’s duty is painful in the extreme.

Finally we arrived at new abode – the already famous ‘Gunive Internment Camp,’ where only men has been interned up until then…Although there were twelve Masses in the Chapel every day, we women were forbidden to attend or to even speak to the men, or make signs to them…We Sisters used to line up in the corridors outside the locked chapel doors, and hear Mass that way, several of the priests reading the Mass, ringing the consecration bell, etc extra loud for our benefits, because they could hear us in the corridor (90 Sisters) standing, kneeling, etc.  The guards who were everywhere were non-pulsed by this demonstration and just dubbed us ‘funny people.’

After the men went away [to another camp] we moved around, downstairs and had the run of the whole house.  Committees were formed, captains were chosen, rules were formulated, work divided, etc. etc. – a thousand and one details to be seen to for weeks in order to secure any kind of order in such hodge-podge living.  The officials really did all they could to oblige us, and they gave in to even the whims of some particularly difficult characters among us.  However, it was a long, long time before we felt ‘at home’ in these surroundings…”

“On December 8th we were in the midst of our feast day celebrations when [we heard] word that the radios were announcing declaration of war and attack on Pearl Harbor.  Immediately I destroyed the few remaining records which had been kept to the end, our financial reports, special file, bank records (of unreported accounts and business), as we expected a search at any time. 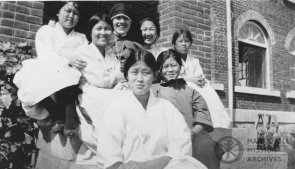 In the meantime an officer from the police came to inform Fr. Coxen, the pastor, of the outbreak of war and asked him to go to the police station.  He was told by the Chief of Police that although we had become enemies because of the war there was no personal feeling against us, and we were to remain quietly within our own houses to insure our safety…

That evening after our Feast Day Supper we listened to the radio which was wild with announcements…and were just going to go to bed about 10:40 when we heard calling outside and knocking.  It was Father Gibbons to tell us that the police had come to take the Fathers away…We watched from an upper window of the convent until we saw the last light extinguished in the Rectory and the Fathers leaving.  That was about 12 midnight.  After that we went to the chapel together and recited Psalm 90 as an act of confidence in the providence of God…

The days following were filled with visits from police and officials, making inquiries, giving instructions, and comforting us with assurances of their protection…They were days of strain, worry about those we knew were imprisoned, others we thought were, and uncertainty about when our own turn might come…”

In a letter to her family, Sister Marie del Rey writes:

“It’s strange and glorious to be starting out to write the first unhampered letter to you in more than three years.  And such years they have been!

…This morning at five o’clock the Japanese Commandant and his staff left and turned the camp’s government over to our executive committee.  We are officially free even tho we may not leave yet…There have been explosions and bombs and planes around all day, so we presume that the Japanese are blowing up the roads and bridges in preparation for a retreat toward Manila.

At 6:30 this morning, we raised the American and British flags and sang the Star-Spangled Banner.  But we lowered them again soon after for fear that the Japanese planes and gunners might mistake this for an encampment of American soldiers and bomb the daylight out of us.

After the hullabaloo all night long of the Japanese leaving and the excitement all day of three meals to eat, of seeing Americans in the guard buses, of the crowds of Filipinos at the gates trying to see their friends, I’m tired, but oh so happy to be able to reassure you all.” 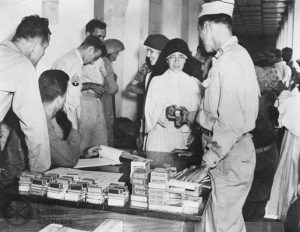 “On the evening of February 22, 1945 many American Planes passed over our camp and bombed Japanese Gun Placement near the camp and in the surrounding hills.  This visitation of the American airman lasted about an hour.  As a result of this action the internees were hopeful and anxious that the time of liberation was at hand.

About seven o’clock on the morning of February 23, 1945 the internees were about to assemble for roll call.  At the same time planes were again heard and the American Paratroopers, numbering about 200, landed at the pre-arranged places as the weather was calm and therefore ideal for such a surprise attack…

As the Americans came into our barracks…how good they looked and how happy we were to see them.  It is something we will never forget and we were proud of our American men.  Bullets flew in all directions and so close we could hear the buzz of them as they shot passed.  We got down on the floor and stayed under or near our beds…

We were told by an American soldier to get some of our things, but only what we could carry ourselves…We walked about half a mile until we arrived at a place where amphibian tanks had been brought up.  The tanks took us to the lake a distance of about four miles…On reaching the lake we had to go under cover of bamboo trees as the Japanese were closing in on us and firing at the tanks as they crossed the lake….

At last all were safe on the other side where trucks and ambulances were waiting to take us to the American Hospital and Camp at Muntinlupa.  As we drove through the now occupied American area, the Filipinos called to us and greeted us along our way.  What a wonderful sight to see our Stars and Stripes flying as we road up the hill.  It was a tense moment for all as our grand flag waved its welcome to us after about three years.”