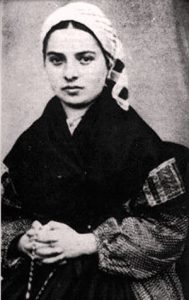 April 16th marks the feast day of St. Bernadette. She is the patron of illness, people ridiculed for their faith, poverty, shepherds, shepherdesses, and Lourdes, France. With the feast day of this venerated saint of Maryknoll fast approaching, we thought sharing portions of this article from The Field Afar would provide a glimpse into the separate pilgrimages taken by each of the Maryknoll co-founders, Bishop James A. Walsh, MM and Father Thomas F. Price, and an insight into Maryknoll’s connection to St. Bernadette.

Selections from “St. Bernadette and Father Price” written by Most Rev. James A. Walsh, MM, The Field Afar, February 1935

“Father Price, co-founder of Maryknoll, was a devout client of the Blessed Virgin. An ambition of his life was to visit Lourdes and, at first hand, observe the scene of the apparitions to little Bernadette Soubirous; and the opportunity came when together we crossed the Atlantic to secure from Pope Pius X the commission to begin the work now known as Maryknoll (The American Foreign Mission). 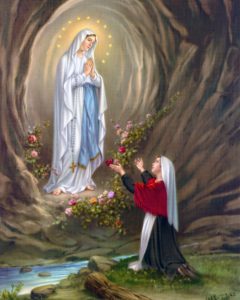 Leaving Rome we separated, and… Father Price hastened as rapidly as a train could carry him to Lourdes. He had practically no conversational French, but he managed to locate and to lodge in the house of Monsieur Soubirous, brother of Bernadette… At Lourdes he naturally conceived a great desire to follow the footsteps of Bernadette, and this was a simple task since the favored young girl had entered the Convent of the Sisters of Charity and of Christian Instruction, at Nevers, France, where she lived for the remainder of her life, and where her precious remains lie today.

At Nevers, therefore, Father Price presented himself, and during his stay, which lasted several days, he was lodged in the house of the chaplain. Looking on these two visits as acts of private devotion with no immediate relation to the work which lay before us, Father Price made little reference to them after we met on the boat for the 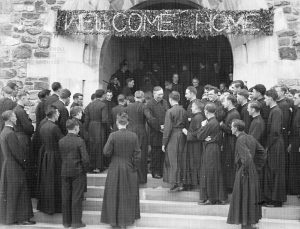 homeward voyage, but he evidently had left a good portion of his heart divided between Lourdes and Nevers.

The following summer Father Price returned to Nevers for a brief visit that concerned a translation of the Life of Bernadette, written by the Mother Superior of the Nevers Convent. Later this translation appeared under the nom de plume of J. H. Gregory, which Father Price had assumed. It was published by Devin-Adair, of New York. On his return to Maryknoll… he kept up a correspondence with Nevers and deepened his [connection to the] Saint.

In 1918 the first group of Maryknoll missioners were selected for South China. They were four in number, and as three of them were very young in the priesthood, it was thought wise to have Father Price accompany the group as Superior. 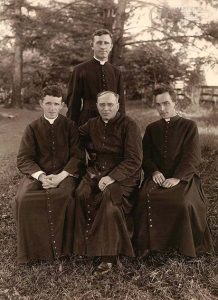 He was very happy in the assignment, and, having arrived in China, he entered joyously upon a task which every day became more difficut. He could say but few words in Chinese, and yet, as… the people to whom he would address himself seemed to understand his heart and warmed to him. A year later Father Price, dying… made the request that before burial his heart should be cut out and sent to Nevers where the Sisters would expect it.

War conditions made it inadvisable to carry out this desire immediately, but the heart was detached from the body, placed in a separate receptacle, sealed, and buried at Happy Valley Cemetery, Hong Kong, where it remained until an opportunity came when a French missionary was returning to his native land. The receptacle was then disinterred and some weeks later was reverently received by the Sisters of Nevers, inserted in a small niche near the body of Bernadette, and covered with a tablet on which was incised [a]… reference to the heart of Father Price.

I have often wished to make a pilgrimage to Nevers, but had no opportunity until last August… The Bishop of Nevers is the well-known Abbé Patrick Flynn… I had written ahead and His Excellency, Bishop Flynn, most kindly welcomed us[.].. Pilgrims were much in evidence and we could not get into the chapel for some time… The Mother General with whom Father Price corresponded has since died, but her successor recalls the visits of Father Price (their benefactor, as she termed him), and she gave the Maryknollers a welcome. 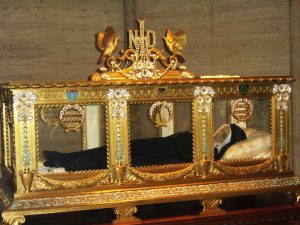 We entered the chapel through the sacristy and Bishop Flynn brought us directly to the châsse which holds the body and rests behind the altar rail[.].. I had seen many pictures of Bernadette, but none so sweet and saintly as the actual countenance reposing in death[.].. Formerly, I understand, the body rested in an alcove on the epistle side of the sanctuary. In this alcove is the heart of Father Price, [e]mbedded in a wall, the exact spot being identified by a small marble tablet, on which the Sisters have had incised a suitable inscription… the Sisters gladly accepting the heart of one who loved so deeply their cherished… saint.

That evening, we left for Paris[.] I was happy to have seen Nevers, and to realize more fully the spiritual bond between Lourdes and Maryknoll. Surely Maryknoll is blessed by such a relationship.”