In a March 1947 article in Maryknoll magazine, Sr. Maria del Rey Danforth highlights the Maryknoll Sisters’ efforts in the Philippines after World War II.  The war brought terrible struggles to the Sisters in the Philippines – internment, property destruction, arrests – however, once the war was over the Sisters immediately got back to work teaching the Filipino youth about God.  The article below focuses on experiences in Malabon, Lucena, and Manila, and highlights the strong spirit of the Maryknoll Sisters in the face of many challenges. Please click on each photo to read its caption.

In Malabon’s old Spanish church, still majestic though half ruined, a benchful of squirming little Filipinos faced me, expectantly.

‘Ilan ang mga Diyos? (How many Gods are there?)’ I asked, hoping they could understand my brand-new dialect.

A promising crop of hands went up, some with three, four, or five fingers raised.  Lucia, at the end, had even called upon both hands to show eight Gods in all.  I searched the roll for a likely victim to call on.  Ah, Pacifico!

There was no answer.  Everyone rolled his eyes at his neighbor.

‘Pacifico! Where is Pacifico?’

Nobody knew; oh, no, nobody knew.  Then someone not in the conspiracy pointed wildly under the bench.

There-o he was, and no one more pacific.  Sound asleep on the tile floor!

We left him in peace and quietly moved ourselves, and the great question of how many Gods there are, to another corner of the crumbling old church. 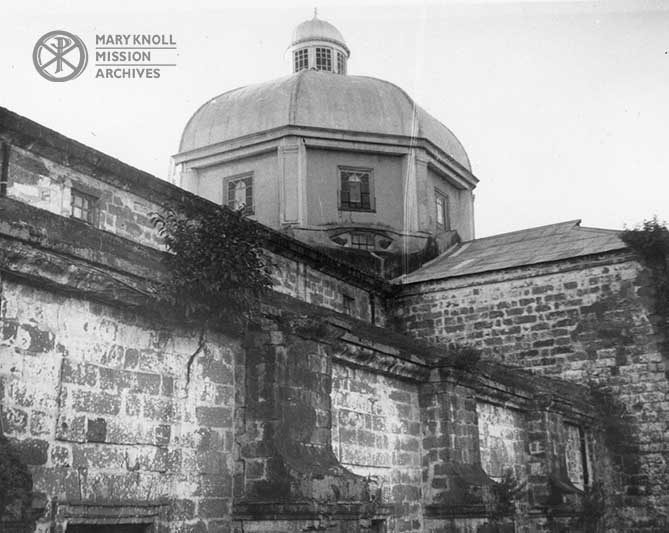 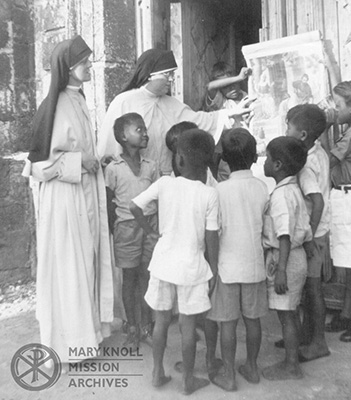 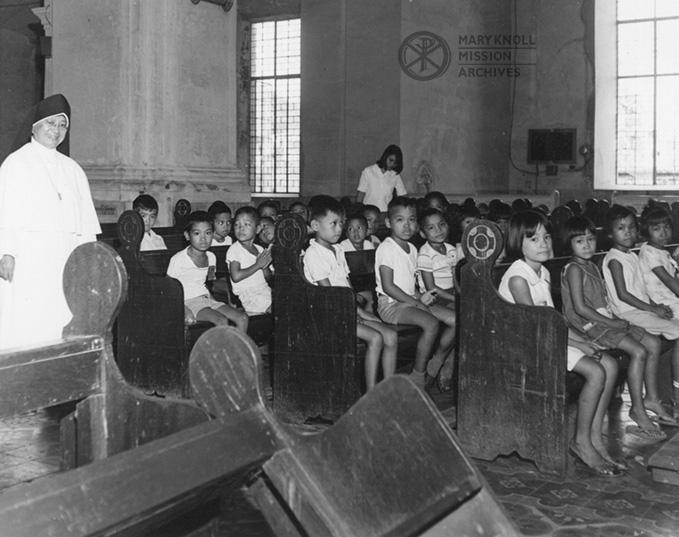 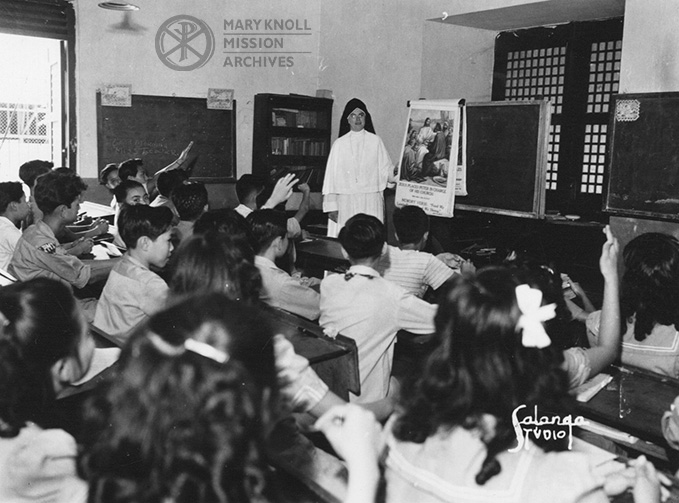 Pacifico would stand no chance of a quiet siesta beneath the bench nowadays.  A zealous young catechist would drag him forth to answer simply, clearly, and politely.  Indeed, Pacifico himself is now a catechist.  He is at the church door every Sunday afternoon, with the majority of the juniors of his neighborhood under his eye.  He shoos them in before him and sets up school with three pewfuls who daren’t even wiggle.

Pacifico is one of twenty-five teachers, selected from the St. James Academy student body of more than 900.  He and his fellow Catholic Actionists teach more than 400 pupils every Sunday.  Last year, more than 150 poor children received First Holy Communion under their instruction.

We have the same monastery building as in the old days, but it’s really twice as big.  Every morning it fills with students, who study until half past twelve.  Then another group comes, to stay until five o’clock.  In addition, we have the auditorium, a big Quonset hut set up since liberation and serving for classrooms.  Even so, there are thousands here we do no touch.

And so it is throughout the Maryknoll missions in the Philippines.  They need prayers and they need Sisters – prayers that faith may flourish in the hearts of the people, and strong Christian hope may replace the fears of war years. 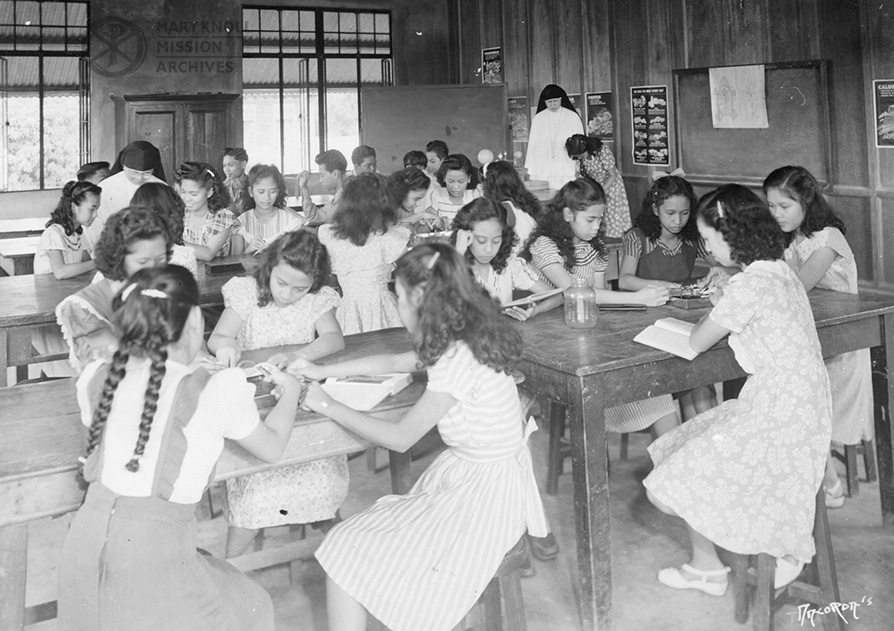 From Lucena, a city forty miles outside of Manila, one of the Sisters writes, ‘Classes have begun again, and this time we were almost overwhelmed with the numbers.  We have many more than last year, with the innumerable names on the waiting list.  Our enrollment is 560.’

At the present writing, Maryknoll Normal College, established in Malabon in 1926 and later transferred to Manila, has not be re-opened.  At the end of the war, the building was found to be totally demolished. 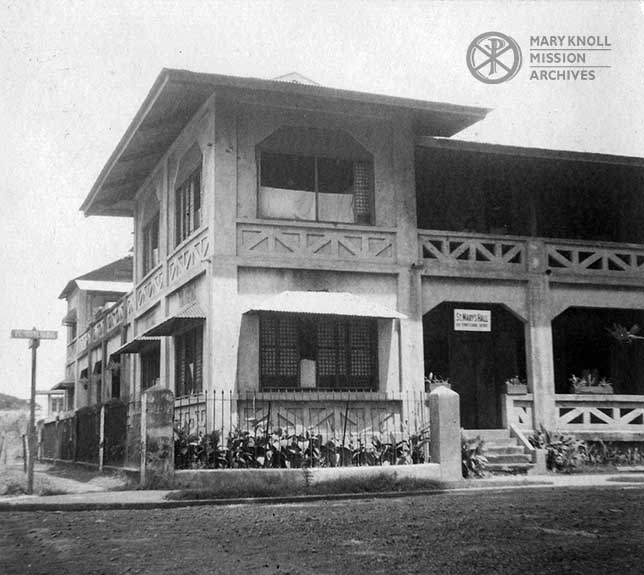 For twenty years (counting time out for the war), the Maryknoll Sisters conducted a residence, St. Mary’s Hall, for Catholic girls attending secular colleges and universities in the city of Manila.  Study clubs, lectures, doctrine courses, and an excellent Catholic library supplied the spiritual influence needed to ‘Christianize’ their education.  Finding the building almost completely in ruins at the end of the war, the Sisters were not able to reoccupy it immediately.  But reoccupy it they did, at the earliest possible moment.

‘The workman are still around and will be for many more days,’ wrote one of the Sisters, ‘but in spite of many jobs still to be done, we did accept girls – about eighty of them.  Then our troubles began!

‘Two days before the opening, there were no beds, through several were in the offing.  Finally twenty-four army cots arrived, and at least we had a place for everyone to sleep.  Some army friends brought us study tables, and Father [Robert] Sheridan and Father Gough brought a supply of tables, chairs, and office equipment.  Finally, we had a place for each girl to study, and a chair apiece!’ 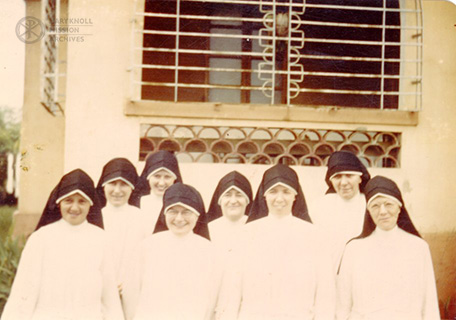 Today, 75 years later, the Sisters still have a mission presence in the Philippines.  Though smaller in scope, their impact is felt just as deeply.