The Power of Love

After violence was used against peaceful protesters on March 7, 1965, “Bloody Sunday,” Dr. Martin Luther King, Jr. sent out a telegram asking the country’s clergy to come to Selma for another march. He was asking them to stand and march in solidarity as they peacefully fought for the right of blacks to vote and responded to the death of fellow protester Jimmy Lee Jackson. Maryknoll answered the call with six sisters, who quickly traveled to Selma from Chicago, Kansas City, and San Francisco. 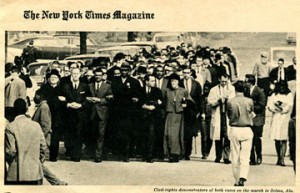 “The power of love was being demonstrated as a more powerful force. The basic… principles of the brotherhood of man had melded us truly into the people of God and this was a unity that was strong and indomitable… [W]e silently marched down to the courthouse, almost 3,000 people strong, and there,… all of us God’s children prayed together.”