In a letter dated February 14, 1946, the Sacred Congregation of Propaganda officially offered Maryknoll a mission on the eastern shore of Lake Victoria in Tanganyika (Tanzania). The territory proposed to Maryknoll was the civil district of Musoma in the northern part of the Vicariate of Musoma-Maswa. The Society’s leadership accepted the proposal on March 12, 1946 and on May 1 assigned a first group of four priests to take up this work.

A telegram announced their arrival on October 23, 1946. The Maryknollers remained under the jurisdiction of the Vicar Apostolic of Musoma-Maswa, His Excellency Bishop Joseph Blomjous (Missionaries of Africa), while learning the language, customs and mission methods, until Maryknoll was ready to take over full responsibility for the Musoma area.

“Maryknoll has had many Mission Departures, and with God’s blessing it will have many more. But this Departure has some unusual features and may perhaps be regarded as a turning point in our development. We go to three continents. We go at a moment of history when all thoughtful people look wistfully to the missions as one of the great keys to world peace. We go at a time when the Holy See looks directly to America for a great, positive contribution to world evangelization. We go on the eve of our own expansion, as may be judged by the great, sudden, overnight increase in mission vocations. And we go when we have a particularly keen desire to go – when our pent-up energies have finally been released after the long nightmare of war – when it is high time to be with our people, to carry their burdens and heal their wounds…

In going to three continents at a time no one is dearer to us than another. We go to all of them for the same reason – God’s children are there and because God sends us. They all need us alike and we need the privilege of working for all of them. But each continent in its turn has a special aspect at this time that makes us particularly happy to go to it, and we only wish we could go in greater numbers to all of them. The Far East beckons to us in its time of great hopes and great troubles –and it is like a call from home. Latin America is just opening out before us and we record our first trials and first advances, showing us its great needs and wonderful possibilities, and we are naturally eager to deal promptly and effectively with both. I will not try to say what is in many hearts as we go to the people of Africa. I will only say that we go to them as American Catholic priests – not simply to be their brothers and their equals but to wash their feet.”

In his diary, Father Albert Good captured missioners’ experiences on their 57 day journey from the U.S. to Tanzania. 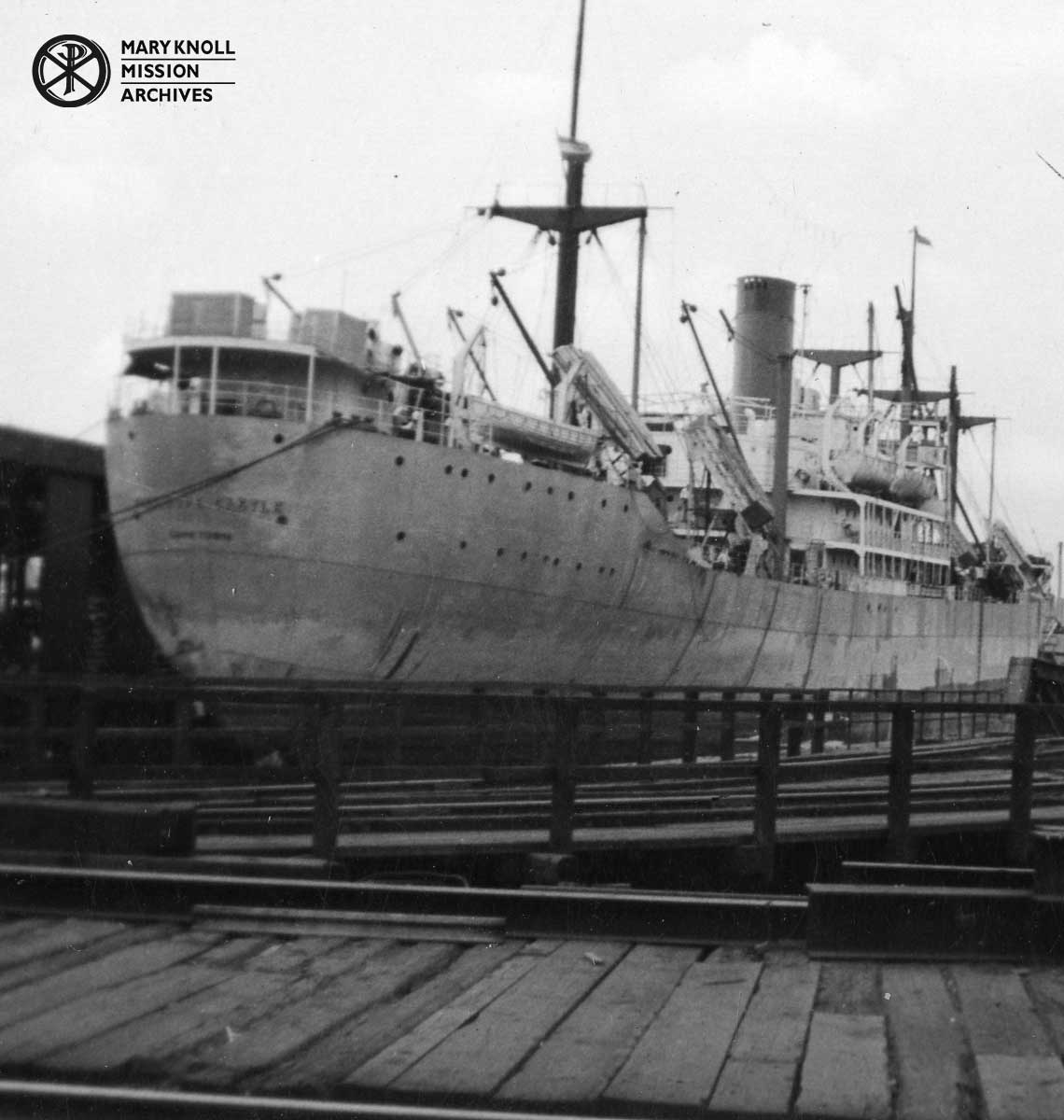 August 20 – Fr. Considine instructed the four American missioners to gather their duds and head for New York City… Father Collins was located in Chicago, Father Good in Massachusetts, Father Bayless in St. Louis and Father Brannigan in Cincinnati, and the four converged upon New York City.

August 25 – Father George Daly drove Fathers Collins, Good, and Bayless through the collonaded streets of New York City to Pier 38, Brooklyn.  Father Joe Brannigan arrived under his own power. A small group of Maryknollers and friends were at the pier to see them off…At 4 pm, the four missioners boarded the ship, farewells were made, the gang plank lifted, and the vessel took to sea.”

Our ship slowly left the dock, turned around, and sailed out of the harbor. We waved goodbyes to those who stood upon the dock until we could no longer distinguish them from the dock.

August 28 – At 4 pm, the customs inspector came aboard and examined our passports. At 4.10 we head down the Delaware. It was very enjoyable watching the shore line on both sides of the boat. At 10 pm, we arrive at the open sea. We watch the river pilot go over the side of the boat. He was lowered to a row boat, which took him to an adjacent craft, upon which he returned to land.

September 2 – All day long we pass island upon island, till evening finds us sighting the Island of Trinidad. We took on a harbor pilot at 8 pm, and sailed along a shore of lights, distant and low, until we dropped anchor in the harbor at 10 pm. Cargo barges came alongside on the starboard, and a barge full of native workers stopped at the lowered gang plank. About 50 men came aboard, and the work of loading began. An oil freighter came alongside port and poured oil into the thirsty side of the Good Hope Castle. We stayed up past midnight, as did the other passengers, watching the hubbub and babble of the workers.

September 3 – Another continent came into view, a point on the coast of Venezuela, South America. Our thoughts travelled to the many Maryknollers working in that continent, with a prayer that we may enter into our work in Africa with their zeal and spirit.

September 10 – Passengers begin to suspect that the Captain has gone beserk, since we spend most of the day zig-zagging, and turning around. An explanation forthcomes with the news that we are now passing the magnetic equator. It is necessary to maneuver the ship to correct the magnetic compasses, as we pass from the northern hemisphere. It was a pleasing sight to the see fuzzy green wake follow the boat as we circled the sea. 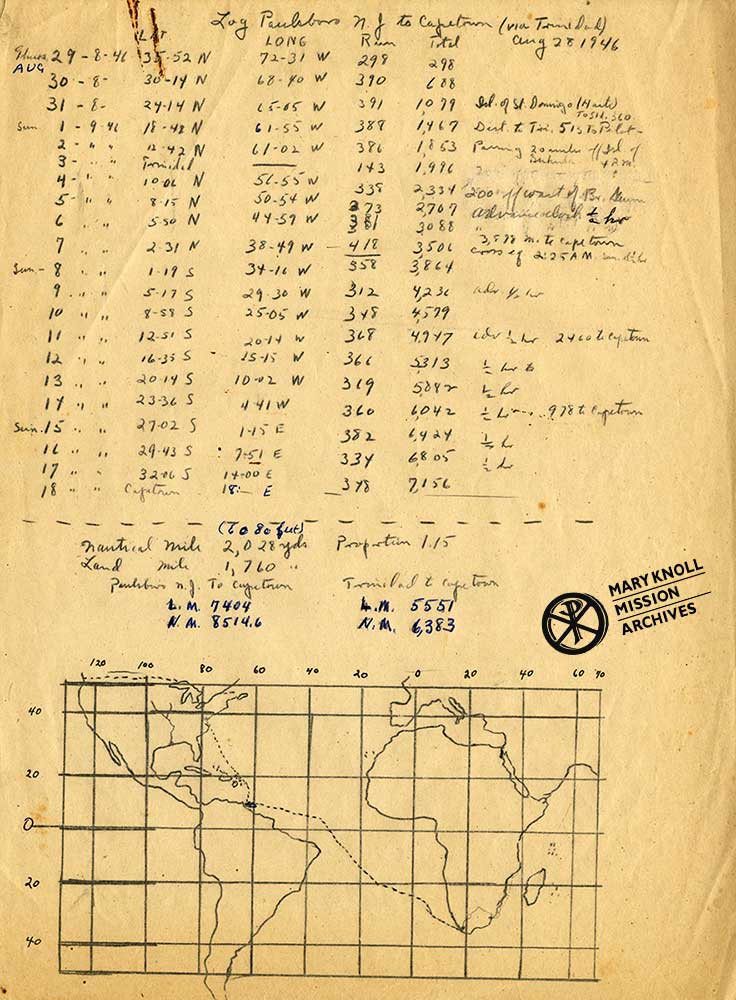 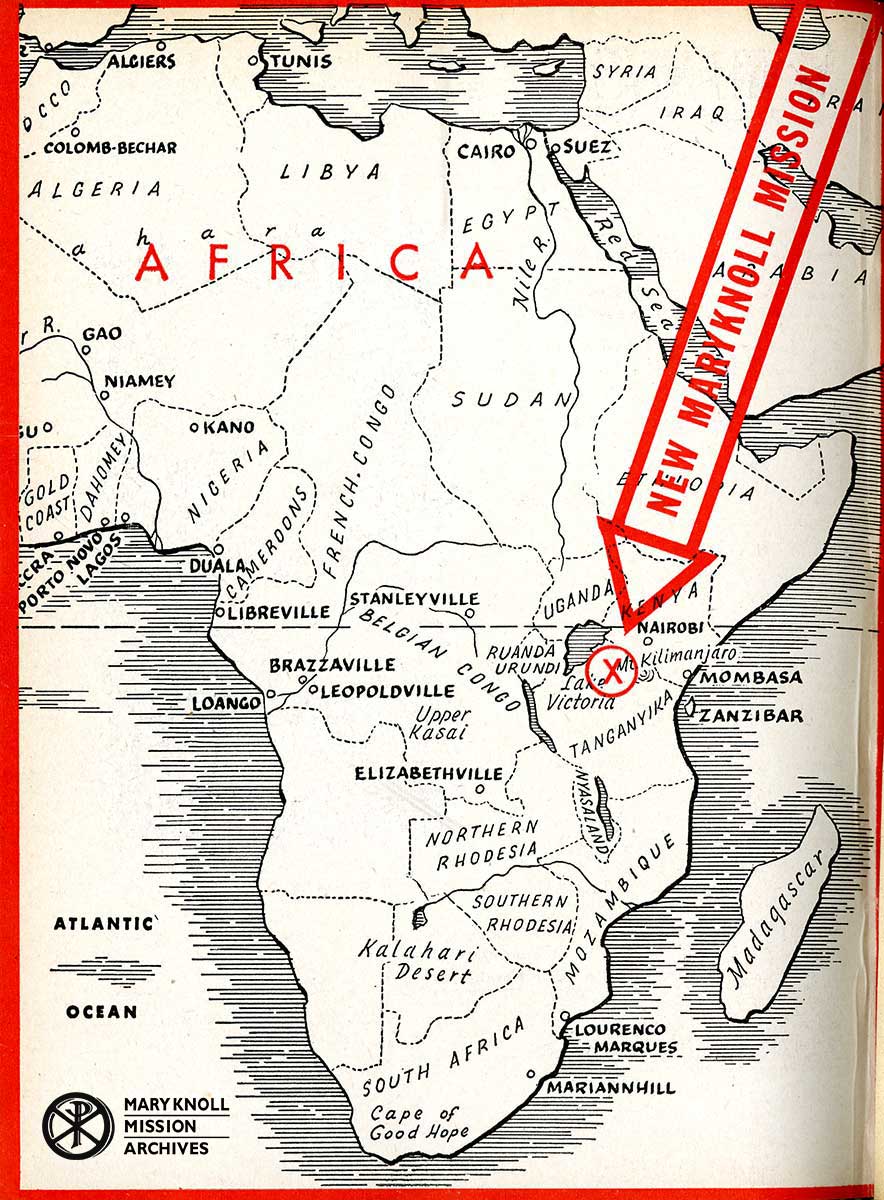 September 18 – Good Hope Castle arrives in Cape Town early in the morning…Father McCann [editor of the Southern Cross] had the Southern Cross photographer take our picture. He wished to comment upon the ‘historic event’ of the first Maryknollers in Africa.

September 20 – Bid Adieu to our friends in Cape Town. Take the 3.15 train for Durban… Train is very slow, and take a circuitous route… About 1500 miles, whereas water route is 800 miles. Rather interesting sights along the way…

September 22 – Arrive at Durban at 11:30 am. Thus began nine days of a most enjoyable stay with American Oblates in Durban.

October 1 – Board the “Carrier Pigeon” at 4. Go through customs and immigration and set out to sea at 5pm.” 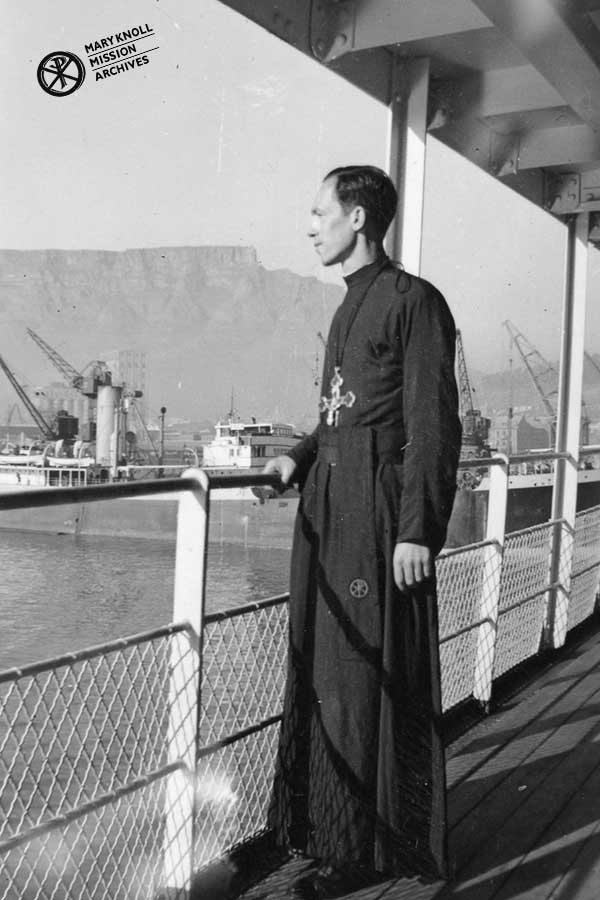 For more information about the Maryknoll Fathers and Brothers work in Africa please visit the Region’s website https://maryknollafrica.org/

Their Resource Centre (https://maryknollafrica.org/category/our-downloads/) includes PDFs of Maryknoll History in Africa Volumes 1-5 by Father Frank Breen, M.M. and The Buffalos: A Story of Maryknoll’s Fifty Years in Tanzania 1946-1996