Getting Around the Missions

Travel has never been easy for foreign missioners. In the past, Maryknoll missioners used any means necessary to get around their missions. Sometimes these methods were familiar, like bicycling or driving a car. But sometimes they required some adjustment. More than one land-lubbing missioner got his sea legs, and more than one city-bred missioner learned to ride her trusty steed.

Travel was not for the faint of heart! Accidents happened all the time. Maryknollers were no strangers to incidents like plane crashes and crazy weather. The missioners hoped they would get from Point A to Point B, and trusted God to get them there in one piece. But there was no telling what could happen in between. This month we visit a few intrepid Maryknollers getting around the missions. What was all-in-a-day’s-work to them would certainly give me pause today! 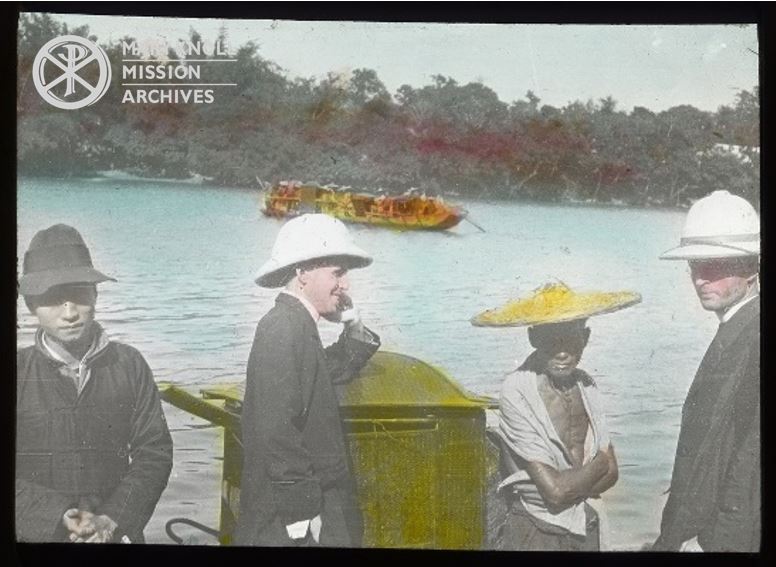 “Bishop [James E.] Walsh amused us with his account of the ‘Aspersion of Fr. Rauchenbach’. In an effort to catch a[n ocean] liner coming down the river Fr. Otto commandeered a sampan (flat-bottomed taxi boat) directed by a ‘grandmother and her daughter’. The four hustled on the sampan and while the ‘grandmother and her daughter’ exercised not a little energy in an honest attempt to get the Maryknollers to the boat, fore and aft stood the Bishop and Fr. Rauchenbach wildly waving arms, handkerchiefs, and what not to catch the attention of the [ocean liner] Captain. As the sampan came closer to the ship, the ship appeared to stop and the Bishop lost no time in getting on. Hardly turned about to help Fr. Rauchenbach, the Bishop was almost thrown by the sudden jarring of the boat, a quick getaway, if you will. This suddenness turned over the sampan which held Fr. Rauchenbach, the ‘grandmother and her daughter’, and all the luggage.”

A letter from Sister Paulita Hoffmann, May 1989

“A group [of Catholics in Tungshih, Taiwan] got some people interested [in religion classes] then asked when I could come – I went by Yamaha at night – about 7km outside town and a young girl took me there but lives nearby so I had no one to come home with. Father was driving a group for family prayer – we’re out in groups every night during May. When I got there the Christians were there and bringing in their interested family or neighbors – the little room filled with stools etc. were called in from neighbors – about 9:45 we finally ended questions etc. and it was decided we go two nights a week. Then there was some buzzing outside and when I got ready to leave A. Ono, head of our parish council, said, ‘Sister we don’t think you should go home alone at night on this road – so I’ll ride your Yamaha to Rosa’s home – and she’ll ride it in for you tomorrow – my brother-in-law will take you home in his car!’ Then they buzzed some more and the result is – I’m picked up and returned each time by either car or motorcycle. They said they do not want to lose a Hakka-speaking Sister on the road!” 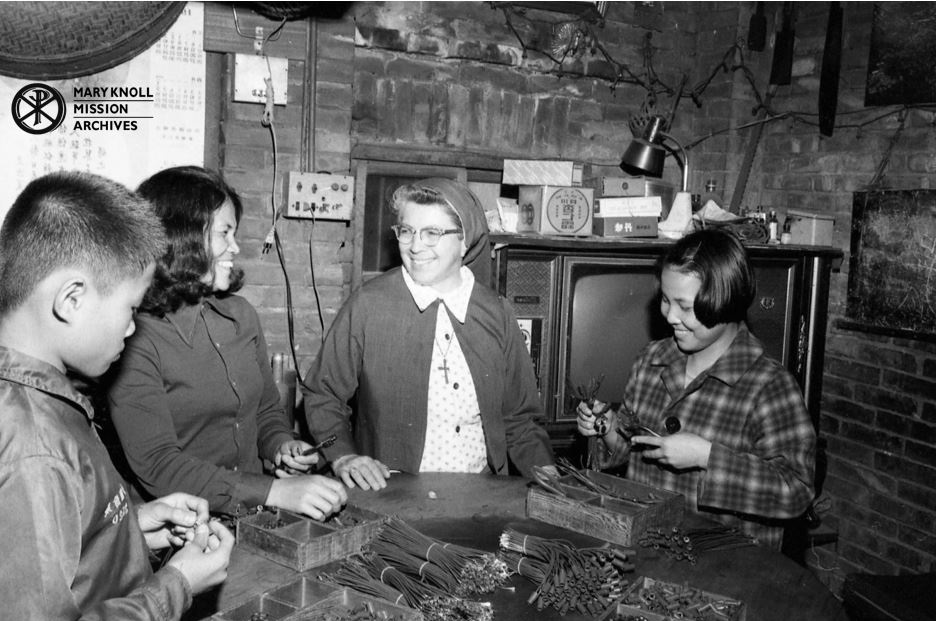 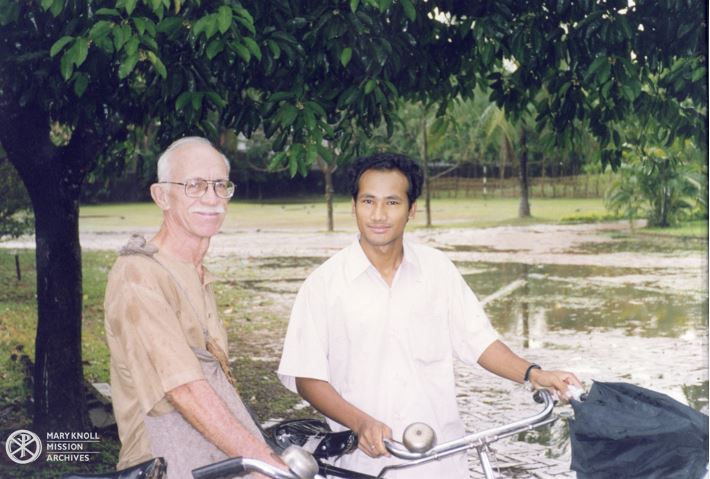 A diary entry from Father Bob McCahill in Bangladesh, October 1998

“For two-and-a-half months I have been hoofing it around this town but today that all ceased when I brought my bicycle, tied onto the train all the way from Mymensigh. It felt great to hop into the saddle and quickly do a circuit from home, through neighborhood, to bazaar and back home. Formerly that would have taken lots more time. I also dropped in to Khalekuzzaman’s oil store for long enough that he could warn me, ‘You’ll get no spinach in the bazaar today; it is too late.’ Within a minute I found a basket of spinach, bought equal parts for Khalek and myself, and tossed him a pound of it when I rode past his store again. Bringing a cycle for the first time to Gaffargaon is a novelty but finding leafy vegetables in this spinach-poor place is truly good news.”

“It was a tiny [Navy] plane, which swooped away to nothing in the back. Two big blisters of plastic swelled from the sides – lookouts for gunners and photographers. Perhaps eight men could be crowded into the windowless, airless, black space between the wings, a sort of tank outfitted with bucket seats, with a door like a safe-deposit vault. Seven hours in such a place and you wonder why you didn’t elect to swim… Once inside, a nice tow-headed Navy youngster trussed me in a Mae West life jacket, strung fore and aft with all sorts of gadgets. He sat me down decisively in a nearby chair and buckled securely the three-inch landing belt…I fell to examining the junk pinned, tied, and sewed on the Mae West which occupied all of my chest and most of my lap as well. I found a police whistle, a flashlight, a packet of shark-chasing chemical, some distress-signal smoke (one for day, another for night), a sharp little knife for cutting off the legs of entangling octopi, and lastly, an envelope of ocean-marking dye, to show just where the rescue crew should throw the memorial wreath. Raising my eyes from this gruesome business, I perused a typewritten sheet on the wall beside me. ‘Method of ditching plane,…if fire is in fuselage,…if wing falls off,…if engines go dead,…if fire attacks fuel line,…explosions during flight.’ I began to think seriously of all the mean things I did in my childhood and what a worry I have been to my superiors ever since.” 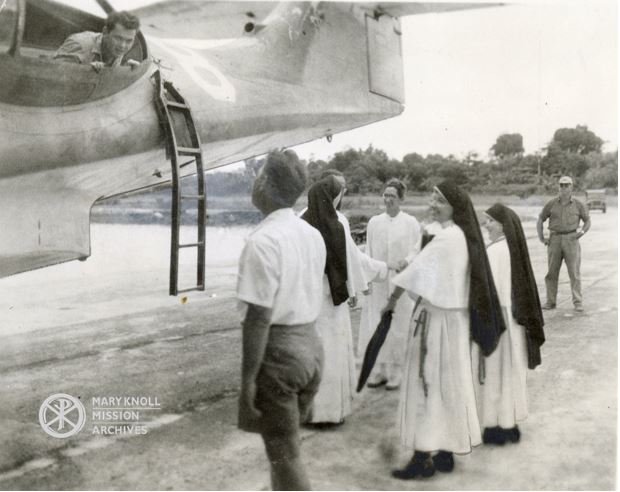