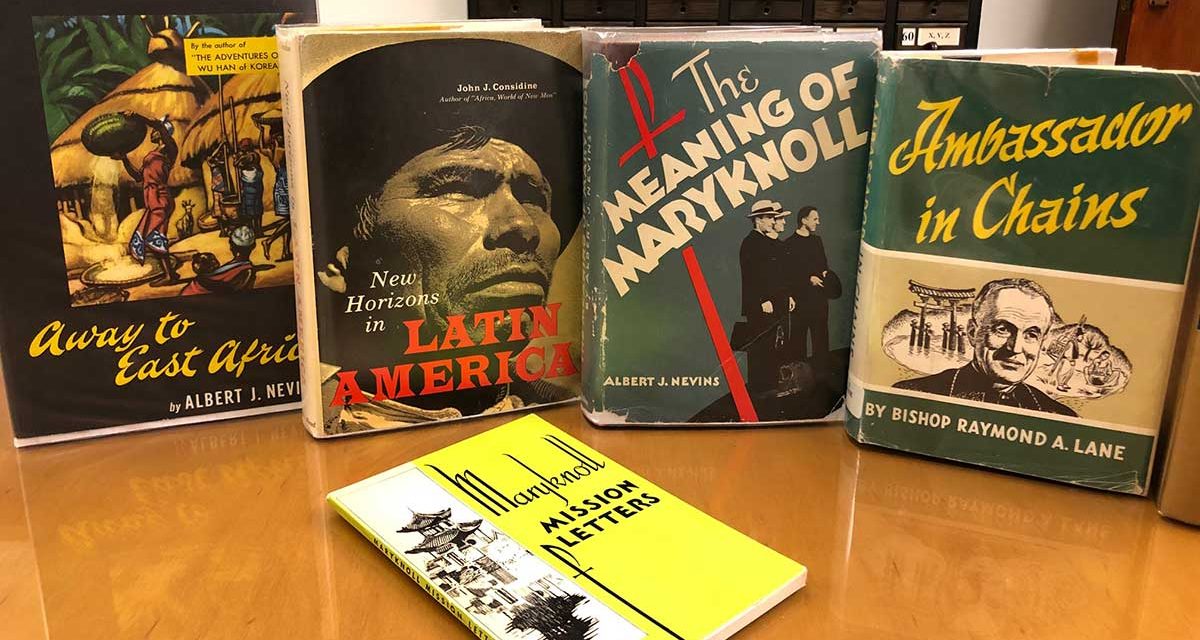 Publishing at Maryknoll readily brings to mind the highly-recognizable Maryknoll magazine and Orbis Books which celebrates its 50th anniversary this year. What you may not have heard of is the Maryknoll Bookshelf.

Founded by two giants of the Maryknoll Fathers and Brothers’ media work, Fathers John J. Considine and Albert J. Nevins, Maryknoll Bookshelf produced a significant number of books by and about Maryknoll missioners and their work as well as teaching aids, films, audio, art and religious articles. The period 1936 to 1966 was a time of great expansion in book publishing by the Society as a part of its Cultivation Department’s mission education work.

In the late 1960s there were a number of changes that affected the Maryknoll Bookshelf. Fathers Considine and Nevins left the Cultivation Department and, as a result, book publishing declined to a bare minimum. The Society was also working on adapting to the pronouncements of Vatican II and the changing times in the Church and US society. The newly formed Social Communications Department took over the responsibilities of the Cultivation Department. As head of Social Communications, Father Miguel d’Escoto envisioned a revitalization of book publishing by the Society. It would be reoriented to publishing works by Third World authors and those who wrote about the Third World, especially from the faith perspective. Through his influence Orbis Books was founded in 1970. 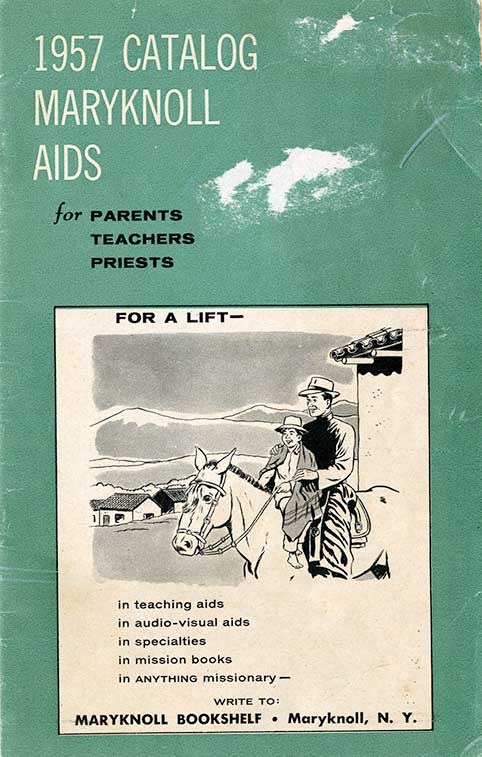 The article “Bringing the Missions to Life – A popular missionary literature is Maryknoll Bookshelf’s aim” appeared in the January 1957 issue of Maryknoll magazine. It provides a good explanation of the reasoning behind the Bookshelf, its aims and some unbelievable statistics. 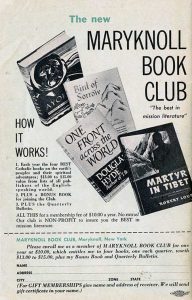 “On a warm summer afternoon in 1906, Father James A. Walsh, archdiocesan director of the Society of the Propagation of the Faith in Boston and future co-founder of the Maryknoll Fathers and Brothers, began a letter to Father John T. McNicholas:

‘I took up a catalogue of a Catholic book concern. Works on history and dogma, books of instruction, devotion and controversy were generously tabulated. So, too, were numerous lists of fiction…

I searched carefully through four thousand titles and discovered on the subject of Foreign Missions – four – two of them published more than a quarter century ago.

How can we know unless we be taught? With few books written in English on the subject, with practically no live periodicals to represent the cause, with a scarcity articles in our various magazines, we cannot wonder that our people, and even some of our good priests, have not realized the need.’

These thoughts…were the inspiration for the Catholic Foreign Mission Bureau and its successor, the Maryknoll Bookshelf. The purpose was the education of American Catholics in World Christianity and particularly in things missionary.

Father Walsh was motivated by the principle that every idea, if it is to be strong, must possess a literature. The mission idea must be found in attractive and convincing books, in order to live in men’s lives.

In the ten-year period from 1946 to 1955, the Maryknoll Bookshelf sold a quarter of a million full-sized mission books; two million textbooks in which the mission idea was incorporated; five million smaller publications; almost a hundred thousand sets of classroom teaching materials. Through these sales, the missions have become a part of home and classroom, naturally and easily.

‘We are trying to give the Catholic American people a strong sense of belonging to a world-conscious Church, rich in mission history,’ says Father John J. Considine, architect and director of Maryknoll’s educational program and prominent mission authority.

‘The answer lies in a carefully conceived, systematic education that will remold the Catholic social concepts to the apostolic pattern… The instruments employed must be books, periodicals, and various audiovisual aids.’

Thus through its mission-education program, Maryknoll attempts to convey to all American Catholics the full message of Christ.”

The Maryknoll Mission Archives houses many of the resources created by the Maryknoll Bookshelf as part of the Society’s Educational Resources collection and our collaborative book collection.