When something significant happens in the world – a national election, a terrorist attack, a natural disaster – it is very easy to turn on the television and watch events unfold live.  But what about the time before TV and 24 hour news?  When to learn about current events you needed to listen to the radio or read the newspaper.  What must have it been like on December 7, 1941 when the news began to come in about the bombing of Pearl Harbor?  Recently I came across two accounts from Maryknoll Sisters who were at the Motherhouse in New York on that fateful day.  Both put pen to paper to record what they experienced that day and those following it.

In 1941, Sister Mary David Berkeley was assigned to the Motherhouse working at the Bethany guest house and in the editorial offices of The Field Afar.  Of the day, she writes:

Sunday – December seventh, was the first Sunday of the month and naturally was retreat day.  The day was rather dark and cold – a good time to be in the house.  Everything was quiet and peaceful.  About three o’clock we received a phone call from the Seminary.  The message?  Japan had attacked Pearl Harbor in Honolulu!!  Naturally the radio was turned on immediately and we could hear the reports of the terrible damage that had been done.  It seems that a number of Japanese planes had come from nowhere and had taken Pearl Harbor by surprise.  It is estimated that 1500 people were killed and 1000 injured.  A few ships and cruisers were also damaged.

Sister Mary Kateri (Joan) Peltier, was also at the Motherhouse, where she was still in formation and studying at Rogers College.  She writes of her experience:

At about four o’clock, I saw a sign on [a] bulletin board saying that the Japanese had bombed Pearl Harbor and Manila – and asked our prayers.  Half an hour later I had the opportunity to speak to a guest who had no knowledge of this disaster.  Her reaction – war.

Monday: Radios pouring forth the latest bulletins from the stricken areas; news of the attitude of others nations.  At 12:30, we heard the president deliver a message to Congress.  He, the president, summed up the facts of Japan’s attack and asked Congress to make s resolution declaring war on Japan…[The sisters] were concerned about our sisters and priests in Hawaii, Manila and Baguio, and Hong Kong.  Almost all recalled Father General’s message to us at Mass the need for prayers and trust in God.  Mother’s attitude the same. 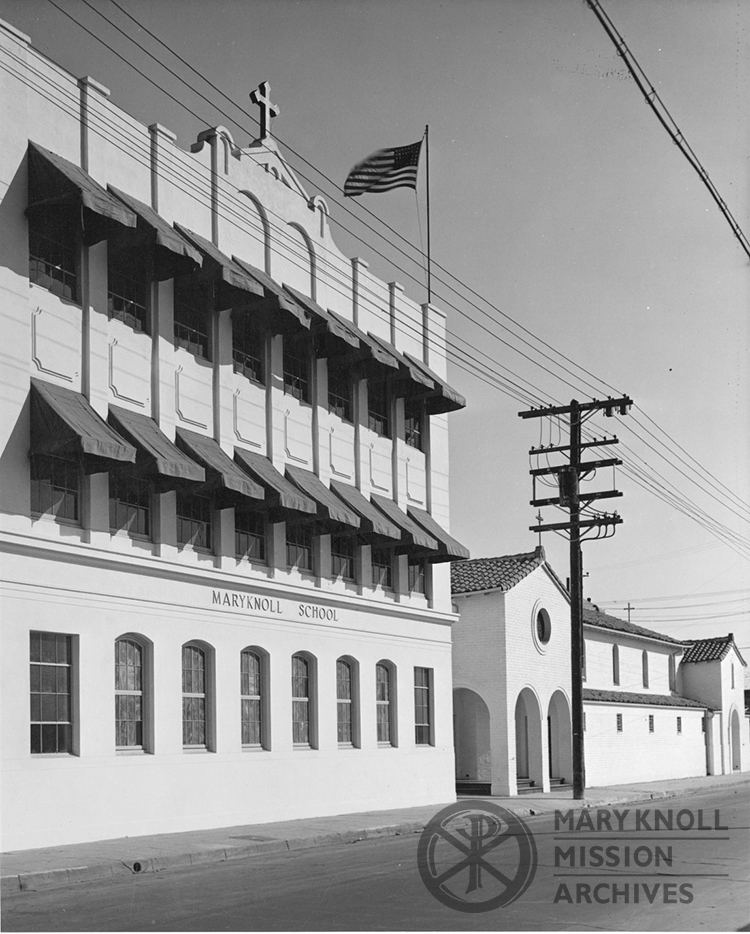 Three thousand miles away on the west coast of the United States, both the Sisters and the Maryknoll Fathers and Brothers had been working with the Japanese population in Los Angeles since the 1920s.  They ran the St. Francis Xavier School and provided a host of other services to the local Japanese.  The events of December 7th had a profound impact on the Japanese mission in California.  Details can be learned though the mission diary entries from the month of December, 1941.  Written by Brother Theophane Walsh, 80 years later we can get a sense of the uncertainty and confusion in the days after the attack.

Dec. 7 Sunday…and one not soon to be forgotten.  After mass this morning…news was flashed over the radio that Japan had attacked Honolulu.  We could hardly believe it we were all so stunned…The local Japanese will have to bear the brunt of criticism and insult, but Maryknoll will give every assistance and protection that we can during the coming trying days. 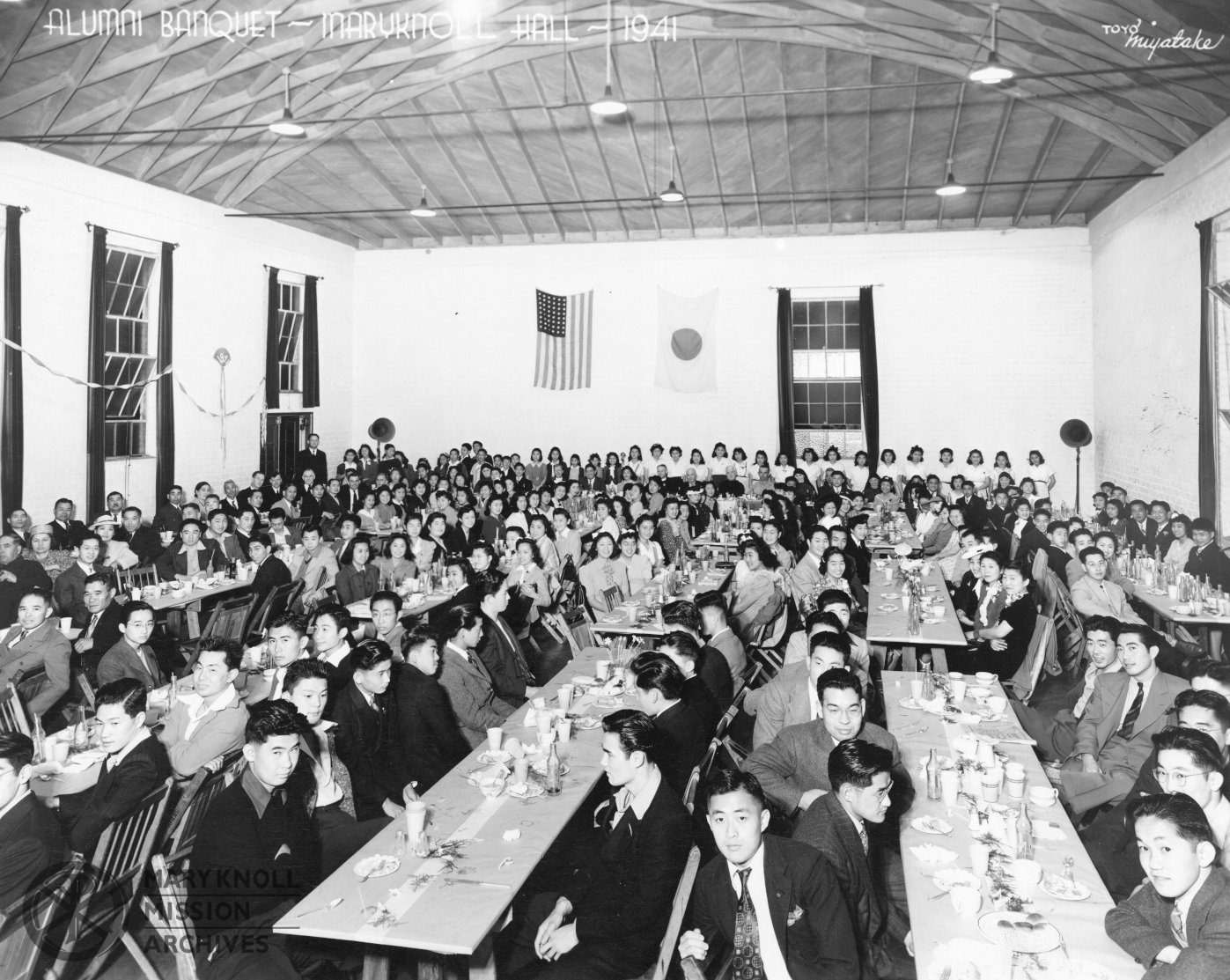 Dec. 8 The parents of about 16 families represented in the school have been taken into custody by the FBI.  Everything is in turmoil in the Japanese community.  Business houses have nearly all be closed.  Banks will not honor any checks of the Japanese…We have many calls from the parents to give them advice as to what to do to get their small business houses open, and to help their relatives in detention.  To keep the minds of the school children at ease we put on a movie for them after the High Mass and then all were treated to ice cream. 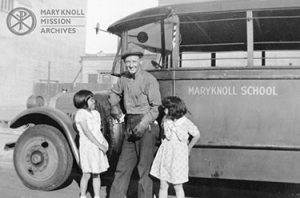 Dec. 10 To make things a little more dismal, strict regulations went into effect against the Japanese nationals this morning.  Callers of all kinds were here today for advice on the new laws, requesting that we take their radios, cameras, old swords, guns, etc…First blackout tonight. – Brothers Bernard and Theophane served as wardens in the neighborhood. 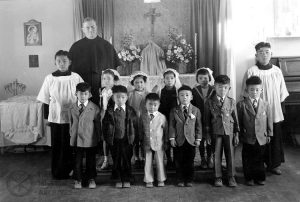 Over the course of the war, many local families were interned in the various Japanese internment camps across the western United States.  Many of the Maryknollers assigned to the west coast missions drove across the countryside visiting the camps (Fr. Leo Tibesar even lived amongst the people in the camps) providing mass, administering the sacraments, visiting with the people and trying to see to the people’s needs in whatever way they could. 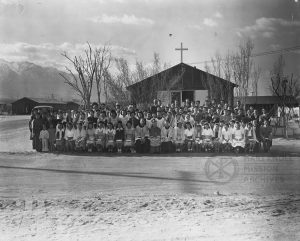