In the 1940s, Maryknoll produced a series of books of letters received from missioners in fields afar.  Titled Marykoll Mission Letters, these multi-volume books allowed readers here in the United States to have a glimpse of what life was like in the missions – places most people have never been and most likely had never even heard about.  Below you will find four stories from the Bolivia and Ecuador missions.  I hope these stories from mission will give readers today the same ability to experience mission as it did for those back in the 1940s.

For the first piece, I randomly chose Volume II, 1943 and turned to the first entry under Bolivia – and what did I come across but a story about a whooping cough outbreak.  What are the chances that I would find a letter discussing a major health crisis, something we are all dealing with today in 2021?  Below, read the account from Father John J. McCabe, missioner to Calacala, Bolivia: 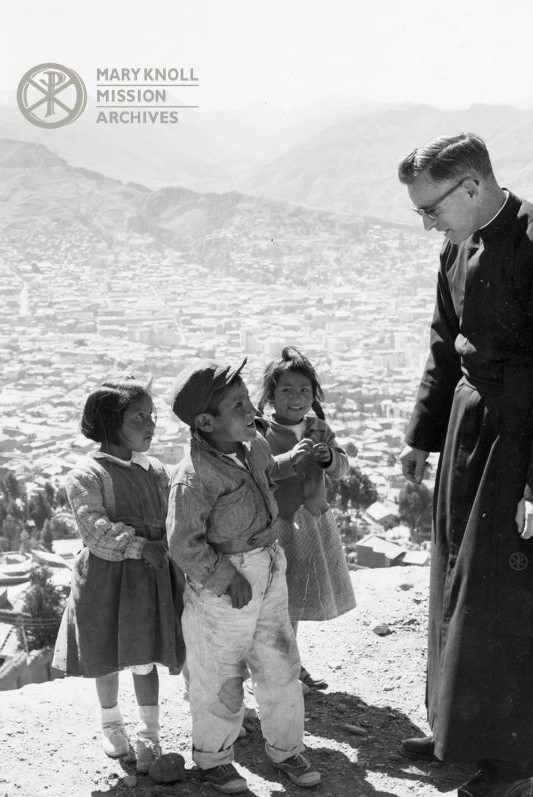 “Looking back over the month, I find that the first interesting news is about whooping cough.  In this part of the world, whooping cough is more dangerous than it is at home, north of the equator.

Forewarned by news from our missioners in the Pando, the pastor at Calacala went to see the American Medical Commission to discover what was being done to prevent an epidemic here.  Reports from the Beni and Pando sections of Bolivia were bad – very bad.  Between five and ten victims were being buried every day.

The Medical Commission informed the Padre that they had, on hand, injections against whooping cough but had not used them yet. Some consultations were held; and with the cooperation of the Bolivian Sanitation Board, injections were given in Cochabamba.

Calacala was next in line.  Children between the ages of six months and eight years were inoculated.  One of our Bolivian friends, who is also our Spanish teacher and extremely generous with his assistance, offered the use of his home for a dispensary.

The next step was to spread widely the news about the injections.  This was done by announcements and also by sending our altar boys and other friends around to various sections of Calacala.  For the first injections, not many applicants came.  Many Indians had contracted the illness, but they were deathly afraid of getting the needle.  After the first series has been administered, however, the Indians began to come willingly.  So, with the help of the Bolivian and American Sanitation Committees, some work in prevention of whooping cough has been done.”

If the arrival of a Padre with Mass equipment and a shaving kit constitutes the founding of a mission, then Porvenir was established on the fifteenth.  There was no band or large group to meet me.  No one knew I was coming.  It was just as well that I was not met.  After seven hours aboard a jogging mule, this inexpert horsemen would have been most uncomfortable if he had to sit during any speeches.

On the following day, I went around and presented myself to the officials.  All were most friendly and promised whole-hearted cooperation.  The most jubilant of all was the headmaster of the local school.  He wanted me to start catechism classes that very day.  However, I had business to attend to and put him off for the day.  Most of the first day was spent visiting the officials, drinking cafesitos, presenting my plans and hopes, and listening to the hopes and expectations of others.

My third day in Porvenir found me still without baggage, which was supposed to have come en seguida, freely translated here as meaning immediately.  As a result I had no catechism, and no dictionary or grammar with which to prepare my catechism class.  However, I had my class, and I managed to convey one or two ideas.  The children seem most eager to learn the doctrine. 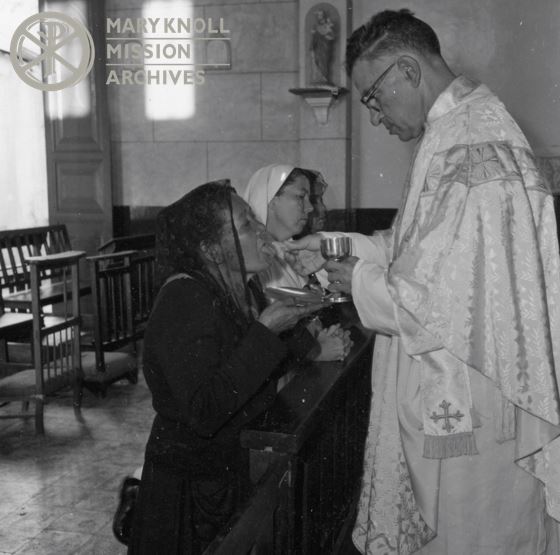 Porvenir – the future, the time to come!  A promising name!  May the Lord give me the grace to help these people, and may their porvenir be replete with God’s grace and blessings. 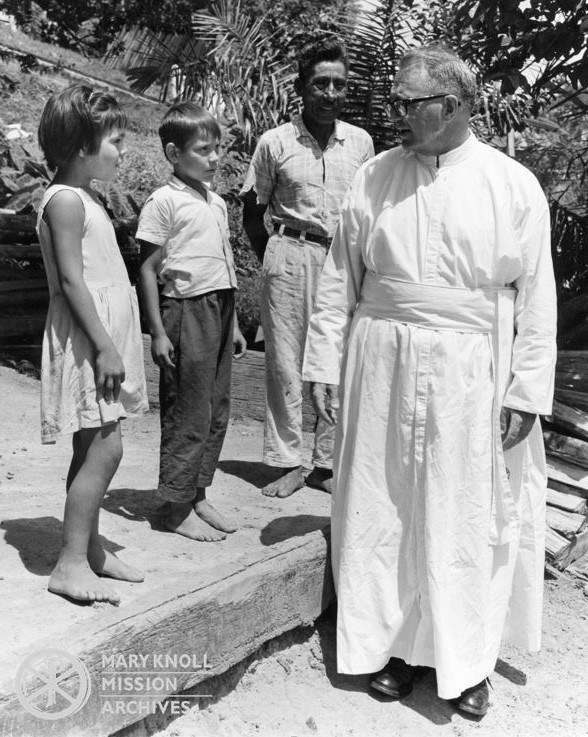 Let’s jump to 1946 and a mission letter written by Father Thomas P. Collins, missioned in Bolivia:

“In order to really appreciate traveling conditions here in the Pando, one must make a launch (type of boat) trip.  The launches are rather comical-looking, measuring fifty feet in length and six or seven feet in width.  They were built mainly for cargo; passengers take second place.

If the latches do not hold all the cargo, part of it is placed on the deck of the launch.  These launches are run by steam and hence have to carry five to ten cords of wood stacked on the deck…Sleeping is done in hammocks strung up on deck.  Hardest of all to bear are the delays; stops of six to eight hours are made to cut wood…After six days on rice and salted beef, and after six nights in the hammock, I certainly was glad to arrive early one morning at the thriving town of Porvenir.

My purpose in going there was to buy a mule of my own….After a week [it was time to return].  When the captain returned, we got ready to sail.  We had no trouble getting the mule onto the launch, but when we were not far from Porvenir, she tried to jump into the river.  However, after a day or so, the mule got accustomed to the new surroundings and made the rest of the trip in fine style.”

The final story comes to us from Father Joseph E. Early, missioned in Quevedo, Ecuador: 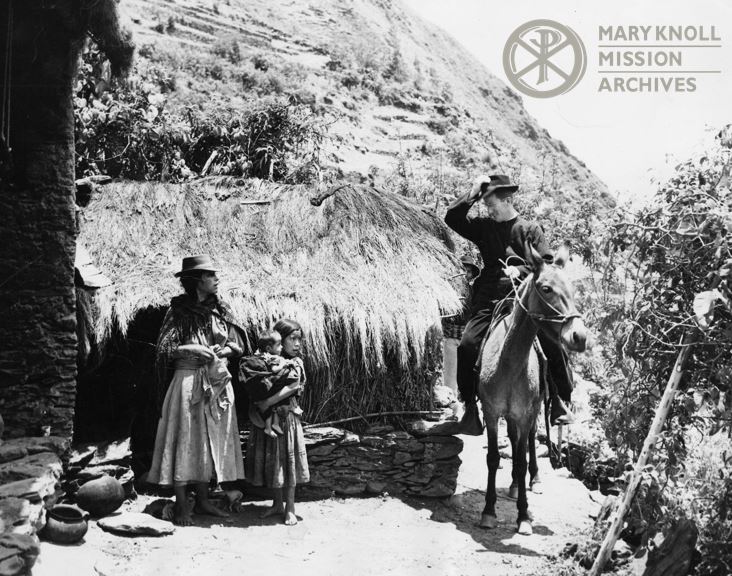 “We engaged a man to dig a well.  But when he appeared on the scene, he informed us that this is not a suitable time for well-digging.  The rainy season is not over, and though we could strike water within a few feet of surface, after a month or so the well would go dry.  So our plans had to be abandoned for the time being.  A contract was made with a Chinese lad to put in the following work: front and back porches, wall in front of the house, and a walk leading to the church. 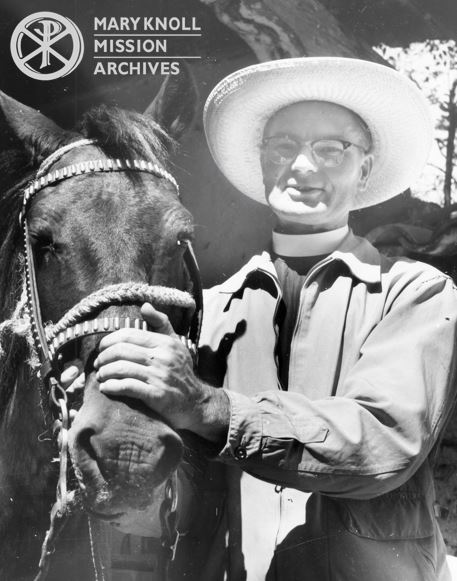 Despite the rain, Father [Hugo] Gerbermann went by horse to Pichilingue to witness two marriages, and then on to Mocache, a small town some thirty-five miles away.  Upon entering the town, he was welcomed by a volley of pistol shots – fired in the air.  After an overnight stop there, with Mass, sermon, and numerous baptisms the next day, Father left for home.  As a parting gesture of good will to the Padre, several men emptied their six-shooters into the blue.”